WHO I FISHED WITH:  This morning, Monday, September 26th, I fished with long-time client Stiles Parker, accompanied by his mom, Trish Littlejohn, and his cousin, Zach Wilkins.

Our first significant autumn cold front blew in overnight and significantly impacted this morning’s fishing in a positive way.

The big question: Is this the start of our fall cooldown leading to turnover, or just another ‘flash in the pan’? 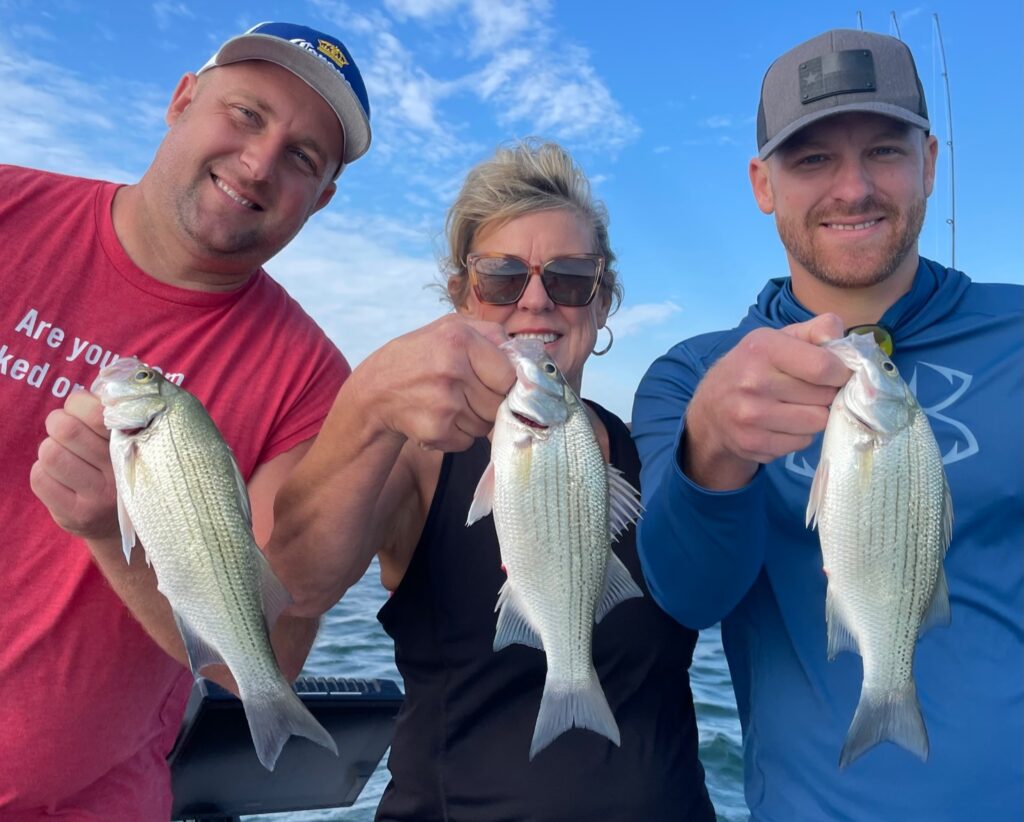 PHOTO CAPTION:   From left: Zach Wilkins, Trish Littlejohn, and Stiles Parker with a few of the fish we took while downrigging.  Downrigging gave up triples, doubles, and singles today on Pet Spoons. 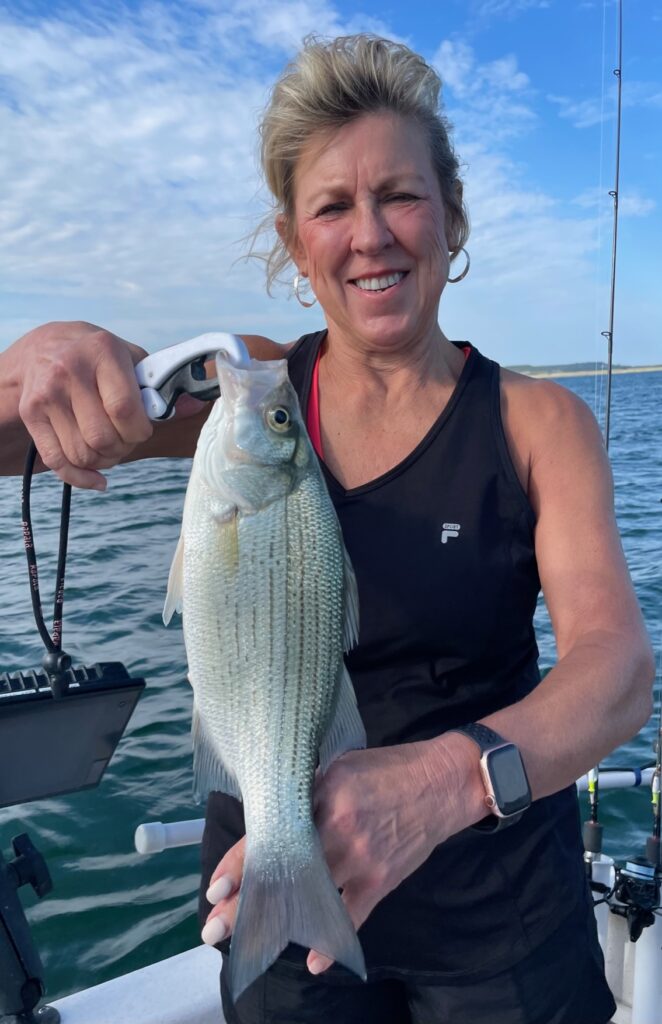 PHOTO CAPTION:   Trish displays one of two 15+ inch white bass we took while working MAL Dense Lures horizontally in over 40 feet of water using the sawtooth method.  Stiles took the other jumbo in our first hour of fishing using the same lure and tactic.

As I launched before sunrise this morning, the winds were out of the north around 10mph and the atmosphere was dry and cool-feeling for the 73F air temperature.

North winds can be a toss-up, but, generally speaking, the fishing will be solid as a cold front blows in, and as the wind velocity is increasing, which it was today through about 2pm.

As I welcomed everyone aboard and gave a demo of the tactics we’d be using during the trip, we actually attracted fish with the small amount of commotion we created as we did so — that was a good sign.

We got going just past sunrise and found fish fairly quickly.  For the first two hours we fished three areas, catching well at two of them.  At all three areas we used a vertical “smoking” tactic with MAL Dense Lures until the fish lost interest, and then worked horizontally with a “sawtooth” tactic with those same MAL Dense Lures (with chartreuse tails) until they lost interest in that … then it was time to move and find more fish.

Around 9:30, as we were sitting on Spot-Lock, I could see bait moving beneath us swimming at a panicked pace and white bass in hot pursuit right behind them.  We moved our lures up through them but were typically ignored as these white bass stayed locked onto those shad.

Having seen this before, I knew a downrigging approach was the cure for this ill.  We got downriggers down and instantly the fished warmed to that fast, horizontal approach in which we were covering lots of ground, just as the fish were doing.

On one occasion, the fish were so thick I stopped downrigging to work MAL Lures vertically through them until they quit biting (after a quick 8 or 10 fish), then we went right back to downrigging and right back to catching them in that way.  All downrigging was done with twin ‘riggers, each with a 3-armed umbrella rig to which #12 Pet Spoons were affixed.

As the fish began to taper off their feed in our final 75 minutes on the water (~11:15 to noon), we settled back and reverted to the sawtooth method using MAL Dense Lures to fish more slowly and methodically for fish which were now settling down on bottom and moving less.

OBSERVATIONS: This is the first significant cold front of the autumn.  It is forecast to push overnight lows into the high 50’s for the next four nights. 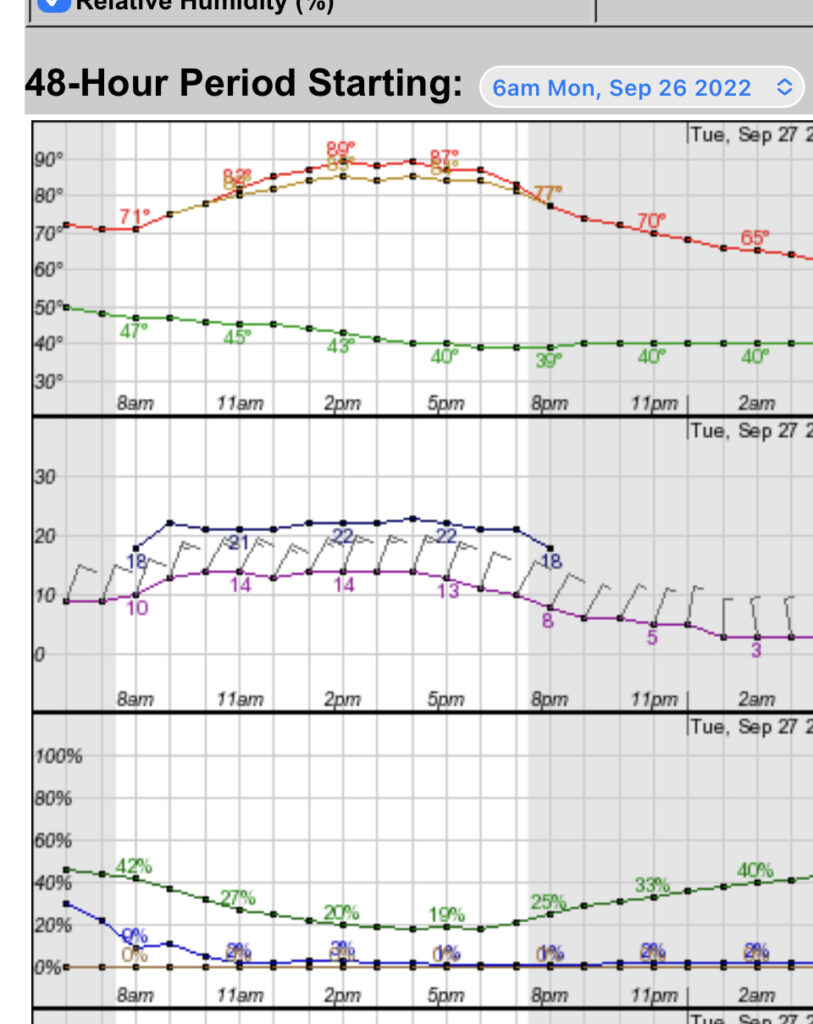