WHO I FISHED WITH: This past Saturday morning, November 5th, I conducted the 13th S.K.I.F.F. program trip of the 2022 season, welcoming aboard Julian Aguilar (age 12), Patricia Aguilar (age 9), and their step-brother Jeremiah Hulsizer (age 11).

Jeremiah’s dad, U.S. Army Major David Hulsizer, has been in the service for 22 years.  After initially serving as an enlisted soldier, he commissioned and works in the medical field as a physical therapist.  He most recently deployed to southwest Asia.  Julian and Patricia’s dad, U.S. Army Staff Sergeant Jason Aguilar, has served for 14 years as a cavalry scout.  He most recently deployed to Poland.

ABOUT SKIFF:  This fishing trip was provided to these military families at no charge.  S.K.I.F.F. stands for Soldiers’ Kids Involved in Fishing Fun.  This program began in May of 2009.  It is funded by the donations and fundraising efforts of the Austin Fly Fishers and other organizations they have partnered with.  S.K.I.F.F. provides the children of military personnel separated from their families due to duty commitments with the opportunity to go fishing.  SKIFF trips are also provided, free of charge, to Gold Star families who have lost their service member while he or she was on active duty.  In mid-2019, SKIFF also began providing trips to dependents whose parents are bona fide disabled veterans.  I coordinate and conduct these ~3.5-hour  adventures on Belton Lake and Stillhouse Hollow Reservoir, just outside the gates of Fort Hood in Bell County, TX, year ’round.  Call or text 254.368.7411. 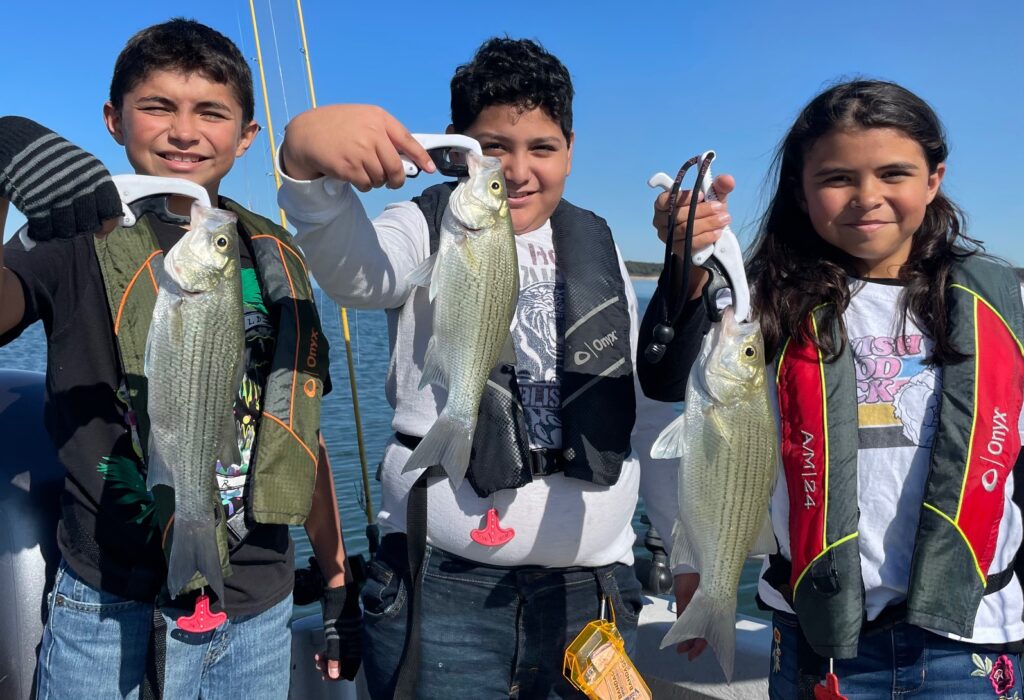 PHOTO CAPTION: From left:   Julian Aguilar, Jeremiah Hulsizer, and Patricia Aguilar with a few of the white bass they took on MAL Original Lures under post-frontal conditions which got tougher as the morning moved along and high pressure built in. 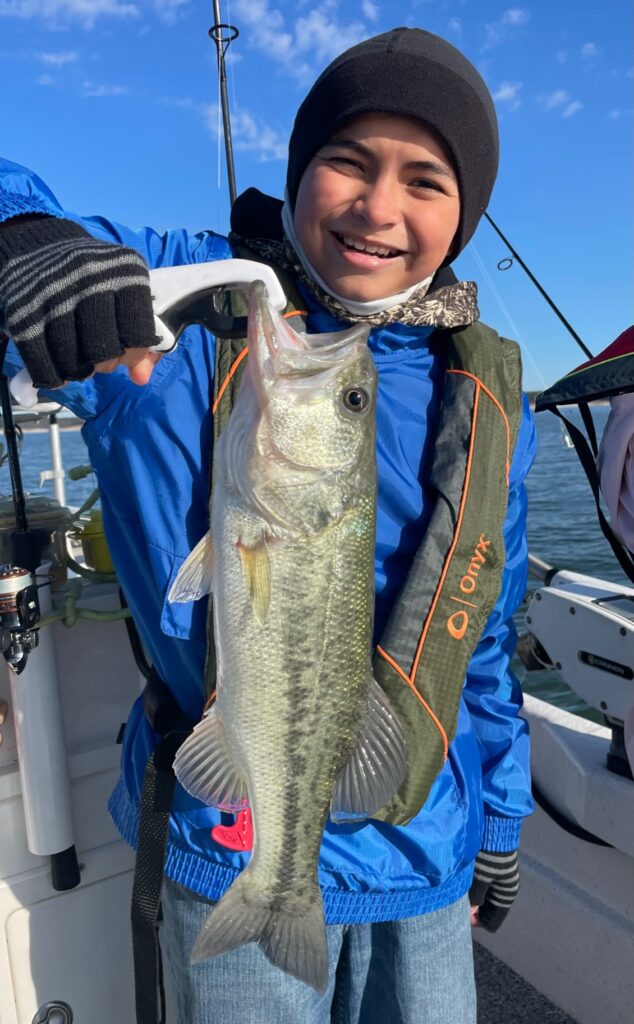 PHOTO CAPTION: Although I am specifically targeting white bass at this time of year, other species are often caught as we use the MAL Lure, which is a shad-imitating bait.  On this trip, we landed 6 hybrid striped bass, 2 largemouth bass, and 1 freshwater drum.  Julian landed the largest of the 2 largemouth, shown here.

We had a significant change of weather overnight, and the impact on the fishery was noticeable.  A cold front pushed through right around sunset on Friday.  This cold front dropped our ambient air temperature 30 degrees, shifted our winds, and cleared the skies.

As we got started this morning, we still had winds at ~12 mph from the NW moving the water.  Our first 75 minutes was our most productive, producing about 40% of our fish in 30% of the time we spent pursuing them.

As the morning moved on, the winds got lighter and the skies got brighter, thus making the fishing tougher.  We saw our catch rate steadily drop throughout the 3.75 hours we fished.

Normally, I run kids trips for a maximum of 3.5 hours (versus 4+ hours for adult trips).  Today, at 11AM, and with about 20 minutes left to go before Mrs. Hulsizer was due to pick the kids up, our count stood at 75 fish.  Patricia had it in her mind that she did not want to leave the lake with less than 80 fish, so, she huddled with her brothers and the three of them “lobbied” for an extension to make sure we had enough time to get to the 80 fish mark.

Now, these are kids who have been dropping and smoking MAL Original Lures for 3 straight hours, save for one short trial of downrigging just to provide a bit of variety.  I’d have figured they’d have been ready to pack it up by that time, but they wanted to keep right on fishing!

So, I texted mom, got approval to go a bit longer and we got the count up to 79 with the wind now going nearly calm.  The kids all worked for a good 6-7 fishless minutes before Jeremiah’s LiveScope screen showed a single white bass scream in from left field like a little guided missile to intercept his MAL.  He hooked, fought, and landed that white bass for a total of 80 fish.  With that accomplishment under their belts, we cranked up, headed in, and met mom right at 11:35A.

OBSERVATIONS: 1) a 40cfs flow continued today, 2) no helpful bird action, 3) the lake rose 0.06′ thanks to brief, heavy, overnight rains on the lead edge of a cold front, and 4) the overnight ambient air temperature dropped 30 degrees, from 78F to 48F in approx. 12 hours.

Wind Speed & Direction:  NW12 at sunrise and for ~75 minutes thereafter, then rapidly tapering down to NNW2 by trip’s end.

Sky Condition: 25% clouds on a blue sky at trip’s start as the cold front’s winds continued to blow, then going cloudless and bright after the winds began to die around 9:15A 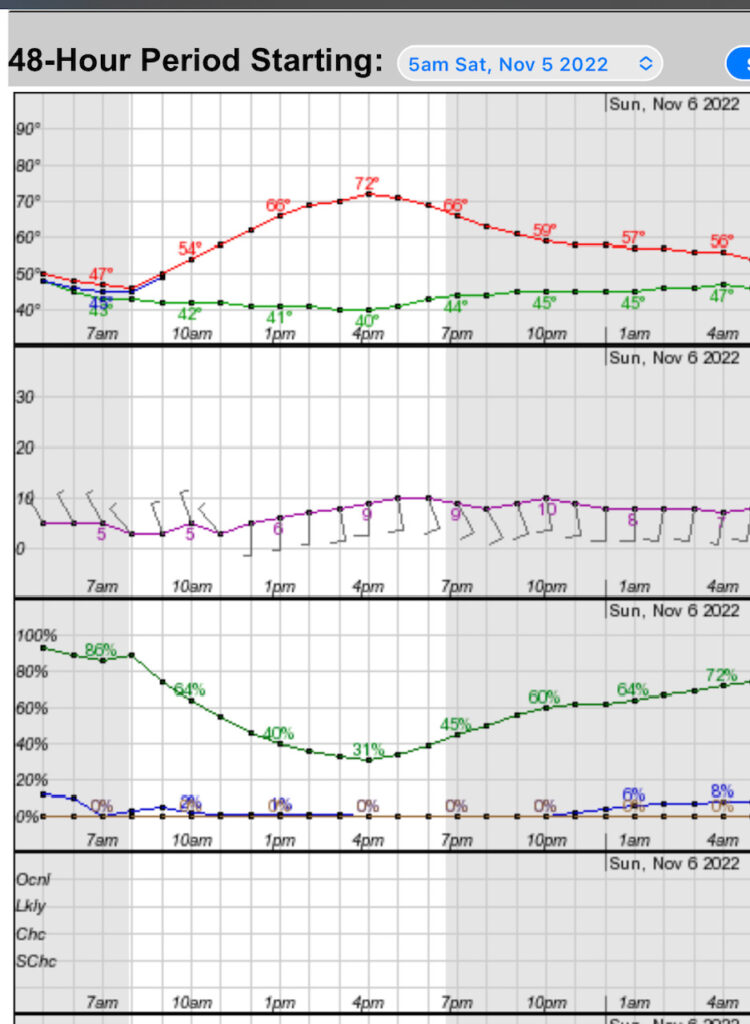