WHO I FISHED WITH: This morning, Monday, November 7th, I fished with returning guest Frank Sumner of Killeen, who brought as his guest his brother-in-law, Arturo Maldonado.

Frank is a veteran, originally from the St. Louis area, now working in the medical field where he serves Fort Hood soldiers.  Arturo, also a veteran, grew up in New York City until age 12, then headed back to his parents’ home island of Puerto Rico, then enlisted in the U.S. Army following high school graduation.  After serving in the infantry, he separated from the military and then worked with military medical records until retirement. 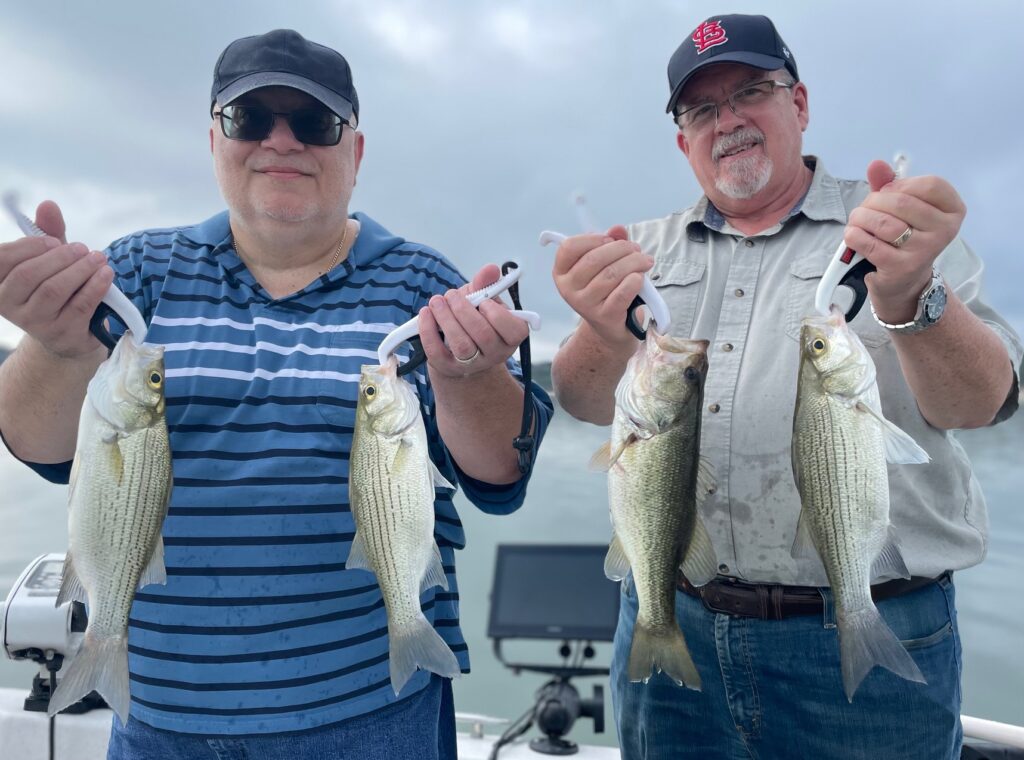 PHOTO CAPTION: From left:  Arturo Maldonado and his brother-in-law, Frank Sumner, with a few of the 106 fish they caught and released using MAL Original Lures (white tail version) on Lake Belton, November 7th, 2022.

Although our trip was 4 hours in length, most of the catching took place between 8A and 10:10A.  We found ourselves on the warm, humid, eastern side of an occluded (stalled) cold front to the northwest of us which resulted in on-and-off showers, some early morning fog, and an otherwise damp, warm, and humid feel to the day with little fluctuation of temperatures, which started around 72F before sunrise and only reached 76F by mid-afternoon.

We fished under a blanket of fog from 7-8A, and only landed 8 fish during that span of time.  Although there was some topwater action during that time — which was easily seen on the slick, calm surface — the fish were well-dispersed and didn’t lend themselves to a typical topwater approach.

When this area began to fizzle, I went looking for more fish and at the same time noted storm clouds to our SE.  A quick check of WX radar showed a fast-moving band of showers headed our way, so, I changed plans and looked for fish in the nearest likely location closest to our launch site in case we had to make a run for it.

The fishing here was okay, allowing us another 13 fish before the first raindrops fell at exactly 10:10.  From the time the rain began, the fishing tanked, and then only partially recovered after two rain cells dropped rain on us and then passed to the north.  From 10:10 to 11A, we only landed 13 more fish, despite seeing plenty of fish on Garmin LiveScope which simply refused our offerings and moved parallel to bottom quite sluggishly.

100% of our fish today came on the MAL Original with white tail.  8 of the 106 fish were taken by sight-casting to topwater fish under the fog, and the balance were taken racing the lure up off the bottom using a “smoking tactic”.

OBSERVATIONS: 1) a 40cfs flow continued today, 2) I spotted multiple single gulls, multiple flocks of 3 gulls, and one flock of ~12 gulls.  Some were lightly feeding on topwater under the fog from 7-8A.

Wind Speed & Direction:  Calm during the first hour with fog, then SE5-7 for ~2 hours, then dropping back to SE1-3 during and after the two rain showers. 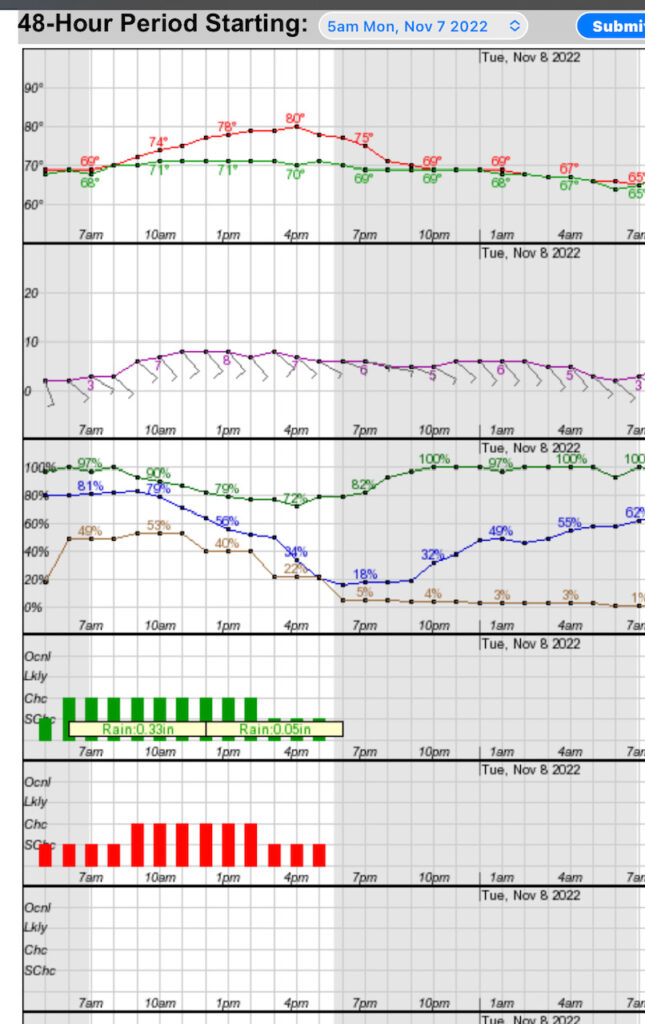