WHO I FISHED WITH: This past Saturday evening, August 29th, I fished for a second time with the entire Olds family from the Austin area.  Joining me this evening were Brian, Tasha, Katelyn (age 12) and Connor (age 8).  They previously came out with me back in November of 2016.

Both Brian and Tasha work in the computer industry, and 2020 has been a very busy one for them thus far.

They got to squeeze in a few vacation days for the first time in a long time last week, and wanted to do this fishing trip together before the busyness of the new school years with sports-filled weekends, etc. kicks in. 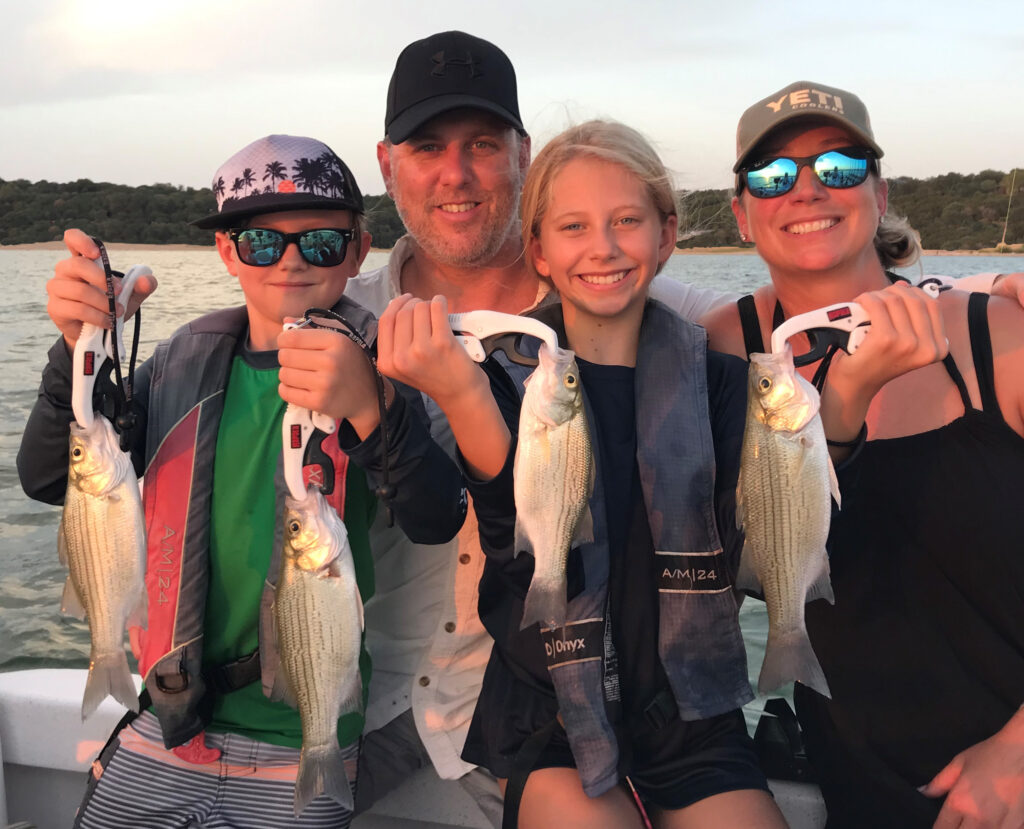 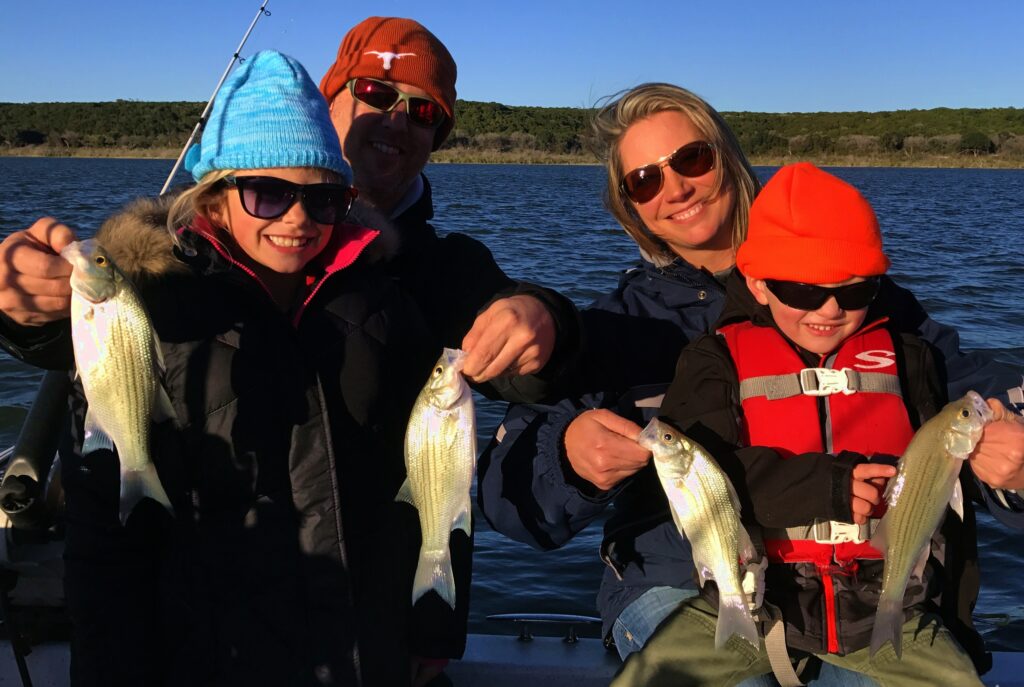 HOW WE FISHED:   As I thought ahead on how to conduct this trip and keep the kids engaged, my chief concern was the combination of very hot weather and the possibility of slow action in the first half of the trip, leaving the kids too worn out to enjoy the typically solid action from white bass about 1.5 to 2 hours prior to sunset.

Since the kids fished with me previously in November, and since that was 4 years ago, I thought doing something different on this trip would keep them engaged, so, I chose a few shaded areas where I felt our chances at catching sunfish would be strong.  Sunfish typically fall out of my catch by mid-October, but, the hotter the water, the better they bite. We hit two shallow water areas using bream poles and, with Brian’s capable assistance, we kept both Connor and Katelyn on the fish for a full 2+ hours, landed bluegill sunfish, green sunfish, and 1 longear sunfish.

As the kids fished, I noted that Connor had a “tendency” to flip his rig right into the same spot Katelyn had just pulled a sunfish from instead of fishing with confidence in his own areas.  I chuckled when I saw this and told the kids that in the fishing world, this is called “potlicking” and that a person engaged in potlicking is called a potlicker.

Defined, a potlicker is someone who, instead of having the confidence in their own abilities to find and catch fish, simply looks for others who have found fish and then horns in, uninvited, on top of the person who has already put the work.  After introducing the term, as siblings will, each accused the other fairly routinely of potlicking for the remainder of our trip. Potlicking aside, the kids boated 62 sunfish.

Around 6:30-6:45 we shifted gears and changed our focus to hunting white bass in open water using downriggers.  The fishing was pretty straightforward as we used 3-armed umbrella rigs equipped with Pet Spoons.  We got right into fish after setting the balls to depth, and the frequency of our hookups increased as dark approached.  We took singles, doubles and two sets of triples right up until dark, putting 41 white bass in the boat.

You can bet the sibs were quite competitive on the downrigging fish count, as well!! 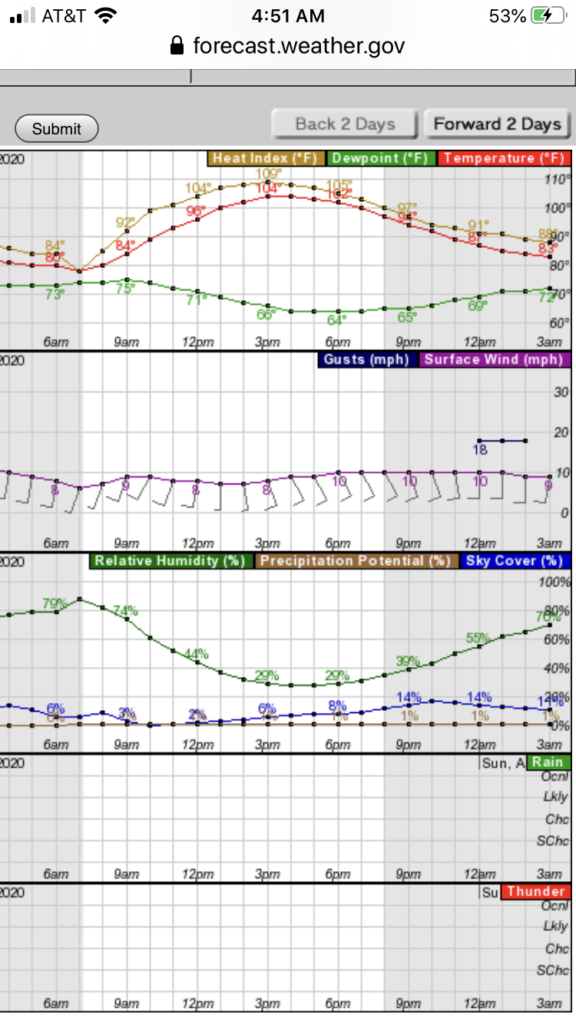 **Area 085 – center of mass for evening downrigging for white bass.  Fished out deeper than this area up to around 7:50, then moved on the shallow side of this area for the last minutes of light.

WHO I FISHED WITH: This past Friday morning, July 31st, I fished with long-time Belton Lake multi-species angler Steve Webb of Harker Heights and his 11-year-old daughter, Bailey (nicknamed Skeeter). Steve books his fishing trips like I book my fishing trips in that he has a purpose in mind and a goal he wants to accomplish by the time his trip with a particular guide is concluded. Today, he came out with me specifically to “pick my brain” about summertime downrigging.  He wanted to see how it is done in a real-world scenario, then do it himself so he can enjoy the results when he returns to his own boat and fishes on his own. I encouraged Steve to come with a prepared list of questions, which he did, neatly written down in a rain-proof notebook.  Most of the questions I answered on the water, the balance we reserved for the parking lot as the trip concluded. In addition to all of this, Miss Bailey has been tracking the number of fish she’s landed this calendar year.  Coming into the morning, her count stood at 988 fish; just a dozen shy of 1,000.  A secondary goal of ours was to see her reach her 1,000 fish goal.

PHOTO CAPTION #1:  That’s Steve Webb and his daughter, Bailey, with a few of the white bass we took with both downrigging tactics on Pet Spoons and vertical tactics on MAL Lures under pre-frontal conditions. 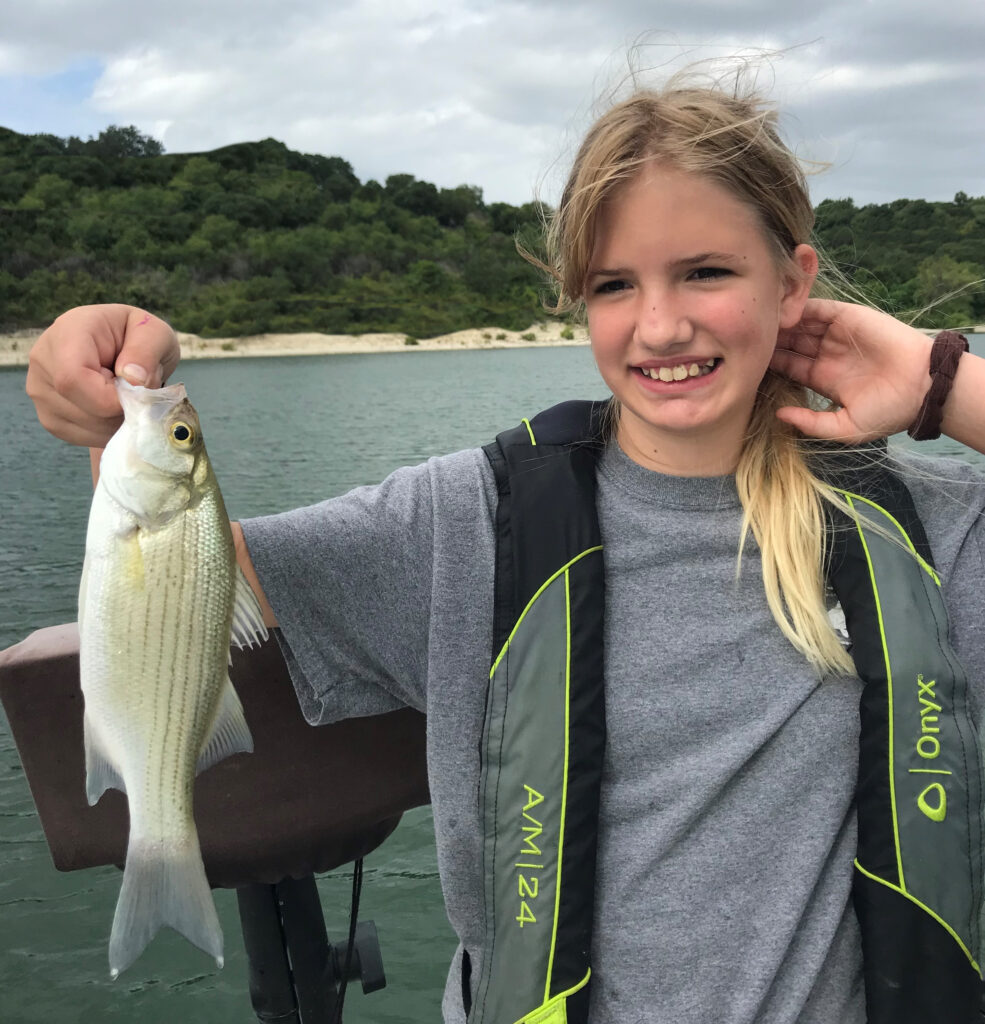 HOW WE FISHED: Given the SSE wind and humid feel to the air, I felt pretty confident that topwater action would emerge under low-light conditions this morning and we were not disappointed.  We enjoyed an hour-plus of moderately aggressive topwater action, with Steve and Bailey seated to the left and right of me on my boat’s front casting deck with me in the middle manually running the trolling motor and taking off fish as they landed them on nearly every cast using MAL Lures cast long and worked quickly.  As the direct sun hit the surface, the fish quit and we had to move on. We had a short lull in the action as the low-light bite stopped and the open water bite developed, aided by a mid-summer cold-front’s arrival, complete with a wind shift out of the west and accompanying cloud cover. The action built to a crescendo, peaking between 8:30 and 9:30 as the west wind’s velocity peaked during that time and cloud cover built to 100%.  During this time we had briefly schooling white bass  within 100 yards of us about 50% of the time.  Even though these fish did not stay up long, they appeared frequently enough for us to get a bead on where the fish were and where they weren’t.  Downrigging put a slow, steady feed of fish in the boat, but, more importantly, allowed me to observe sonar for heavy concentrations of fish worthy of stopping atop of to work vertically for. We did just that on a number of occasions, really racking up the numbers on MAL Lures worked fast and vertical.  After reading about the MAL Lures all summer, this was Steve’s first opportunity to see them in action for himself.  Long story short, he bought 6 of them on the spot in the parking lot after our trip was concluded!!   Read about MAL Lures here: MAL LURES Around 9:30, the white bass were still feeding hard, but, one other thing Steve had requested for this trip was that we leave some time to do some of the shallow water sunfishing with Bailey which the two of them had read of in my reports. We left the white bass biting and headed up shallow to work live bait under light floats for sunfish, landing 31 of them before calling it a day and rolling home just ahead of a line of storms which pushed in from the WNW.  A great day of fishing with a great student of fishing and his pretty daughter!!

OBSERVATIONS:   Classic pre-frontal conditions and fishing today.  Fishing was solid under low light with southerly winds, then under brighter, mid-morning conditions, the westerly wind shift took place and the fishing improved sharply, staying excellent until scaling back a bit as the winds tapered before turning NW with spotty storms spawned along the front all afternoon.

Wind Speed & Direction: SSE7 before sunrise, steadily shift through S, to SW, to W during our time on the water.  There was a peak wind velocity from 8:30 to 9:30 went the winds went westerly, during which the fish activity also peaked. Sky Condition: 20% cloud cover with white clouds on a clear sky, slowly transitioning to full, bright grey coverage as the winds went westerly

Wx SNAPSHOT: Look at that windshift — a fisherman’s dream!!! 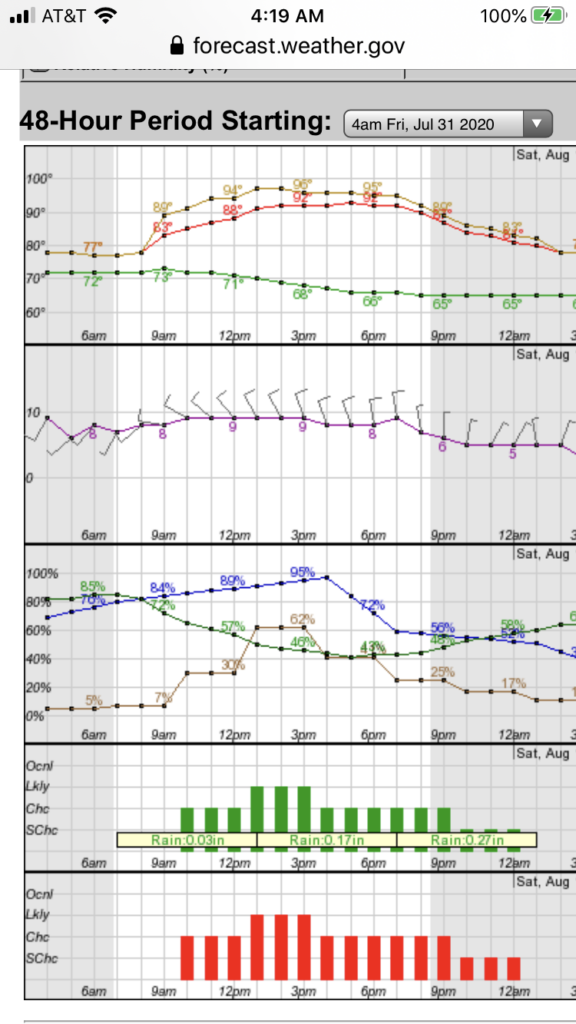