Scott and his wife are from the Bryan-College Station area where Scott works for Lochow Ranch, a pond and lake management company, providing comprehensive private lake and pond management services throughout Texas, Louisiana, Arkansas and Oklahoma.  They routinely camp at Lake Belton, and that’s how they came to book with me.

The boys are all from the rural town of Iola, out between Bryan and Huntsville.

After fixing them his “Paw Paw Special Breakfast” (that’d be Pop-Tarts), the crew drove over from their campground and showed up on time for our 6:30A start.

My next openings will be on July 13th and 15th.  Weekday mornings are always best.  Saturdays are available for on-the-water sonar training sessions (only) until after Labor Day when I’ll again offer Saturday morning fishing trips (until mid-March 2023). 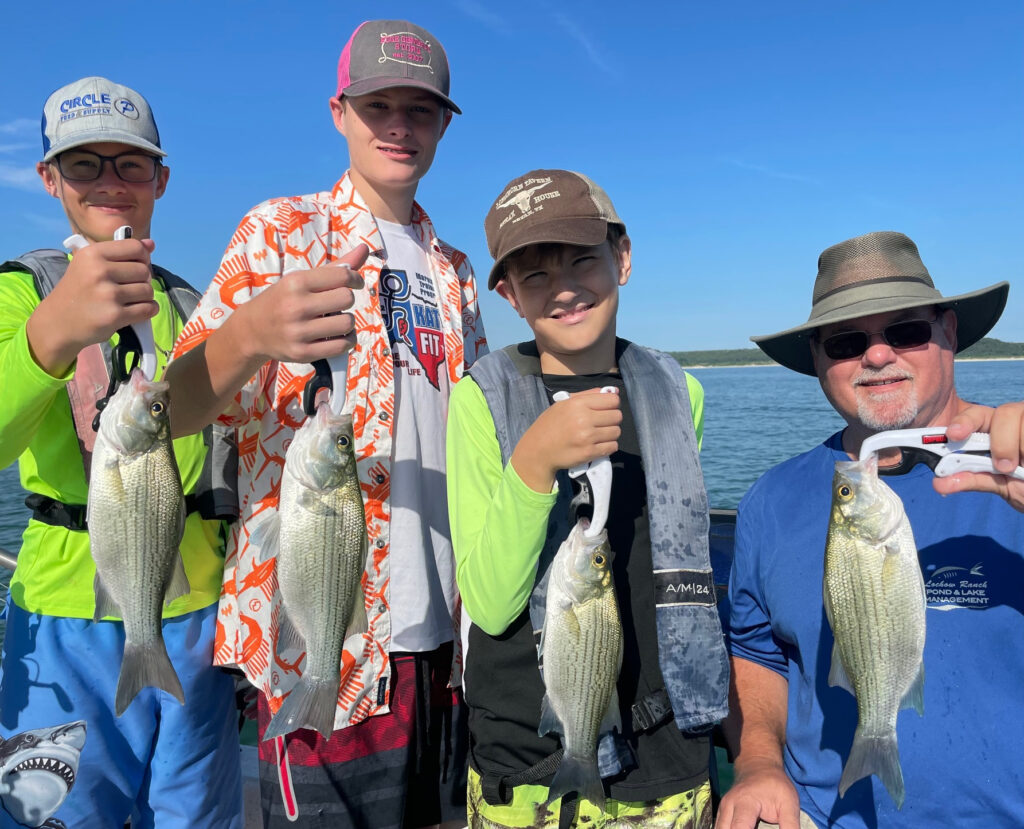 PHOTO CAPTION: From left: Jacob, Josh, Jace, and Scott Sutphen with a few of the Lake Belton white bass we really worked for today under bright skies and near-calm wind conditions.

We faced pretty tough conditions today — nearly cloudless skies, and nearly calm winds through 10AM.  Our best run of catching actually came right at the close of the trip, between 10:10A and 10:55A, when we put a final 31 fish in the boat.  This is atypical, especially in the summer, to catch more fish in the latter part of the trip, but, the fish turned on when the wind blew.

Until that wind kicked in, we faced very much the same scenario at each of the places we searched … we’d see a few fish on sonar, Spot-Lock on them, create some commotion to draw them in, and caught a few, only to have their interest drop off very quickly.  We could not get fish to stay under the boat for any length of time.  So, seeing this, we adjusted by moving frequently, taking a few fish from a given area, and then moving again as soon as the bite dropped off.

All of the fishing we did, up until the wind began blowing, was vertical smoking with the MAL Heavy (chartreuse tail).  Once the wind started blowing, we got on top of a good school, caught some vertically, and then noted large, patrolling schools of fish on bottom out to our starboard side, as witnessed on side-imaging.  I gave everyone targets on the horizon to aim for so their casts would fall among the fish, and everyone started catching using the “sawtooth” method on that same MAL Heavy.  We never saw a single such school of feeding whites while under calm conditions.

By 10:55, the bite was waning, the heat was rising, and the boys’ appetites were increasing, so, we called it a good morning right there, having achieved a “personal best” for number of fish caught on a single fishing trip for the Sutphen crew.

OBSERVATIONS:  Here is the temperature profile I measured down to 60 feet. Note the 6-degree plunge between 40-45 feet:

Wind Speed & Direction:  Light and variable from the south, puffing at 1-4mph through 10A, then picking up to S8 thereafter. 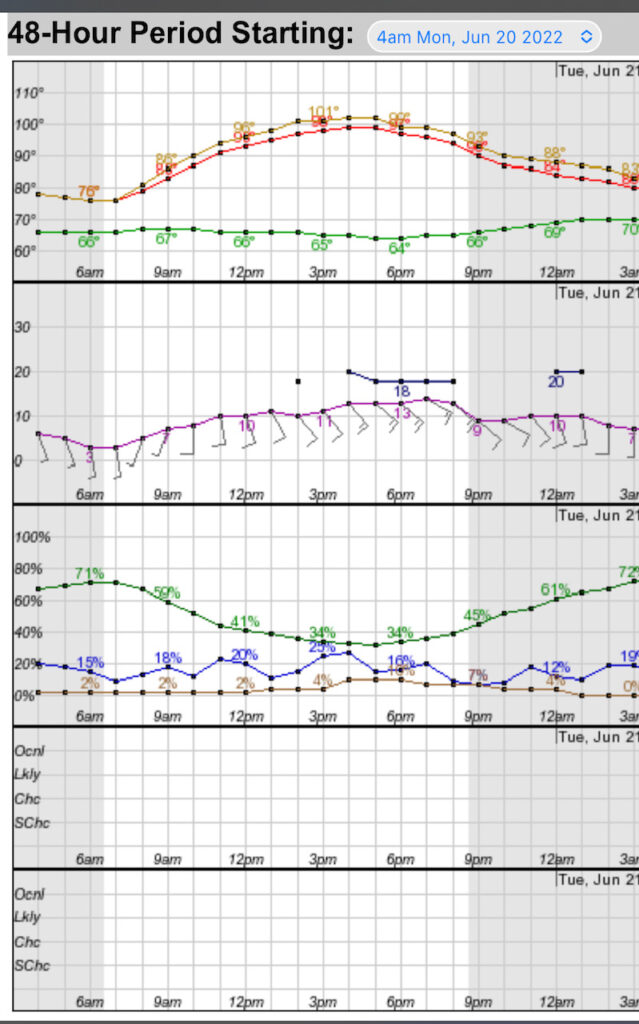 AREAS FISHED WITH SUCCESS:  We moved around a lot today, picking up a few here and there.  The only areas which produced more than 10 fish were…

WHO I FISHED WITH:  On Tuesday, 31 May 2022, I fished with returning clients Sonny Monroe and his son-in-law, Ryan Miles, accompanied by first-time guest Brent Richey.

Sonny is a retired public school administrator, Ryan works for a hydraulics company here in Central Texas, and Brent has been in the telecommunications industry for many years now.

With the Memorial Day weekend now past, things were quieter than usual even for a weekday today as most folks returned to work for what is left of this shortened work week.

Brent is Sonny’s neighbor, and, after enjoying his previous trip out with me, Sonny extended an invitation to Brent to join in on the fun this morning. 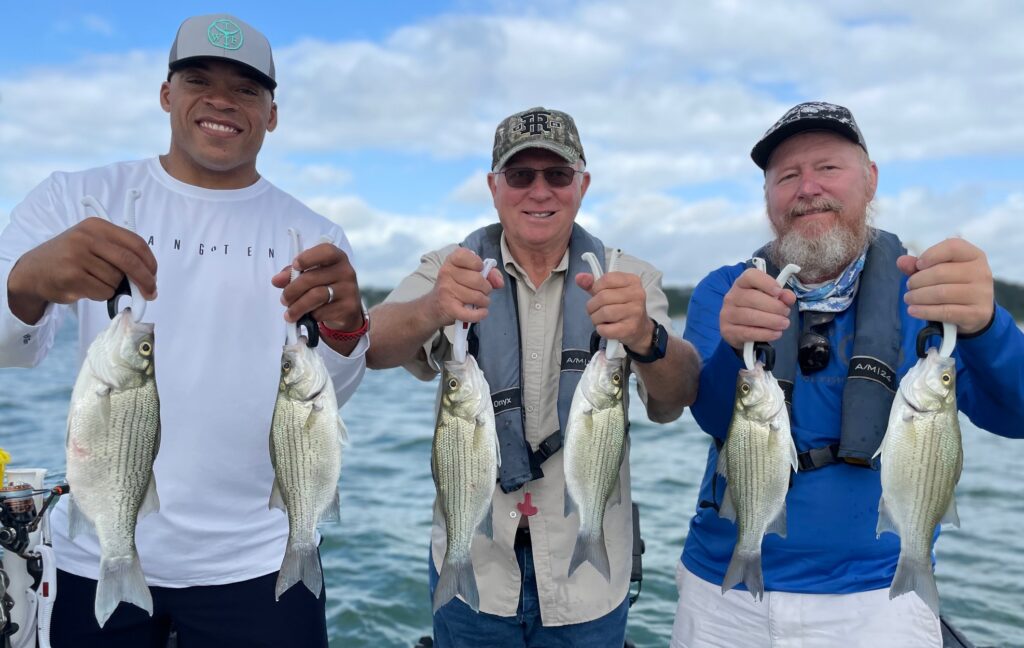 PHOTO CAPTION:  From left: Ryan Miles, Sonny Monroe, and Brent Richey with a portion of their 261 fish catch.  All fish were taken on MAL Heavy Lures with barbless hooks for ease and speed in unhooking. 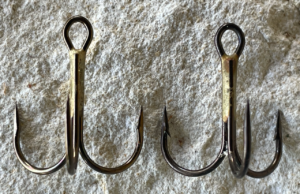 PHOTO CAPTION:  Closeup of the MAL Lure’s barbless hook with just a “bump” on the point (on left) versus the standard treble hook used otherwise.  If you already own an MAL Lure and want to make it barbless, it is better to mash down the barbs than to replace the hook, as hook replacement requires a split ring which lengthens the lure’s overall dimension and increases the likelihood of “blade strikes”.  I do offer the MAL Heavy (only) with barbless hooks already affixed.  See link below.

With Sonny and Ryan both having prior experience with using the MAL Lure fished both vertically and horizontally from their one prior trip with me earlier this spring, and Brent having fished for white bass successfully at Richland-Chambers in the past, there was minimal learning curve to work through to turn fishing into catching this morning.

We found some light topwater action in the first hour of light as white bass forced the first young-of-the-year shad to the surface and fed upon them there while the light level was low and we had a complete deck of clouds.  Once the sun’s angle increased and the clouds thinned, the surface action was over.

While the action existed, we actually did better fishing vertically and by using the sawtooth method, as the fish which came to the surface stayed there only briefly.

After about an hour, we moved on to deep water and stayed there the remainder of the trip.  Using MAL Heavy Lures with barbless hooks (as I was anticipating a high fish count this morning based on wind and weather), we used a “smoking” tactic and proceeded to “wear ‘em out” until about 11:15A, at which time we packed it up, leaving the fish still biting pretty well.

Sky Condition: Greyed over skies for the first hour, followed by steady clearing to ~40% white clouds on a blue sky for the remainder of the trip. 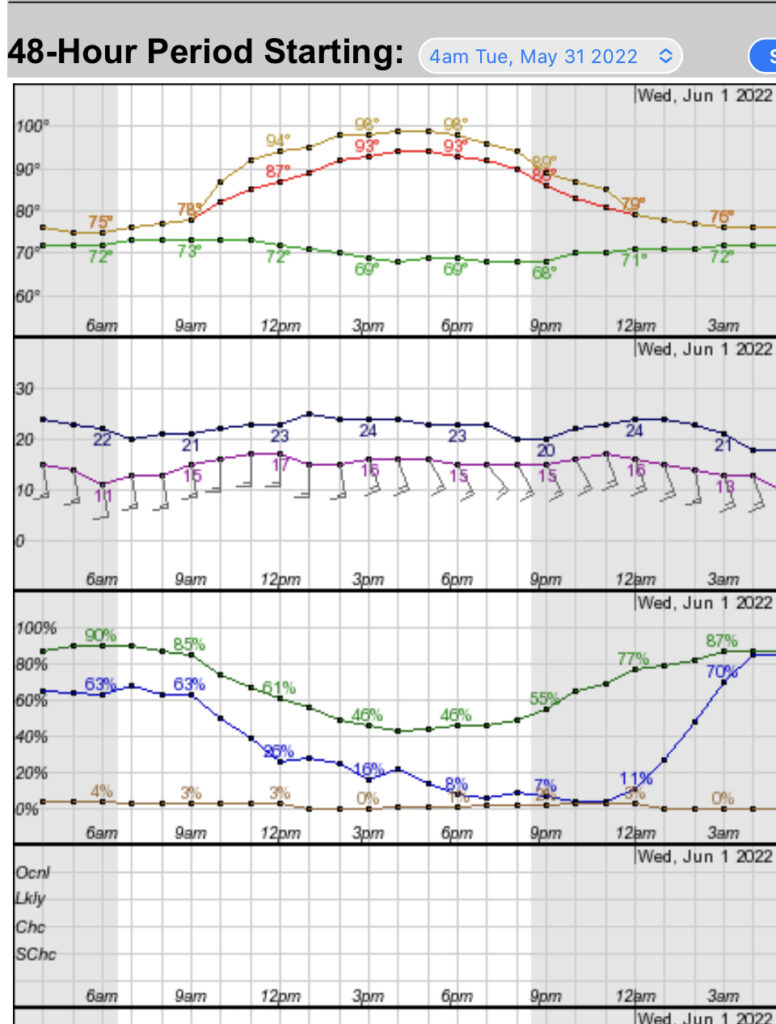 WHO I FISHED WITH:   This past Tuesday I fished with returning guest Jerry Saikley.  Joining him were three first-time guests including his wife, Cheryl, and friends of theirs, Mike and Ann Foegelle.

With a cool front moving in as we fished, we saw steady action all morning.  I positioned the ladies so as to share one Garmin LiveScope screen on the starboard side and the fellows on their own shared screen on the port side.  Doing so guaranteed some good-natured ribbing and competition.

Perhaps the most memorable event of the day happened just after our last fish was landed.  As is my custom, I wanted to get a good group photo to commemorate the trip with and to send to everyone aboard afterwards.

I got everyone lined up abreast of one another, got the sun’s light just right, got the fish positioned so their broad sides were to the camera, and snapped a few good shots as everyone held their fish using Rapala fish-holding devices which work like a smooth-jawed pair of vice grips.

When the photos were done, I was about to say, “Okay, if you just go ahead and spread the handles of that fish-gripper apart with the fish hanging over the side, they should just drop back in the water and swim off well.”

Well, all I got out of my mouth was, “Okay, if you just go ahead and spread the handles of that fish-gripper apart…” and we all heard a THUD on the floor of the boat as Cheryl (very literally!) followed my directions and released her fish inside the boat.

Everyone looked at her as if to say, “Why did you just do that?!?” as she started laughing uncontrollably at what she’d just done.

I put the boat in gear and started to idle away from our last fishing area just as all the laugher was about to die down and said, “Yeah, everyone’s laughing … except that fish back there with the concussion!”  More laughter…

It was  a great trip with some great folks! 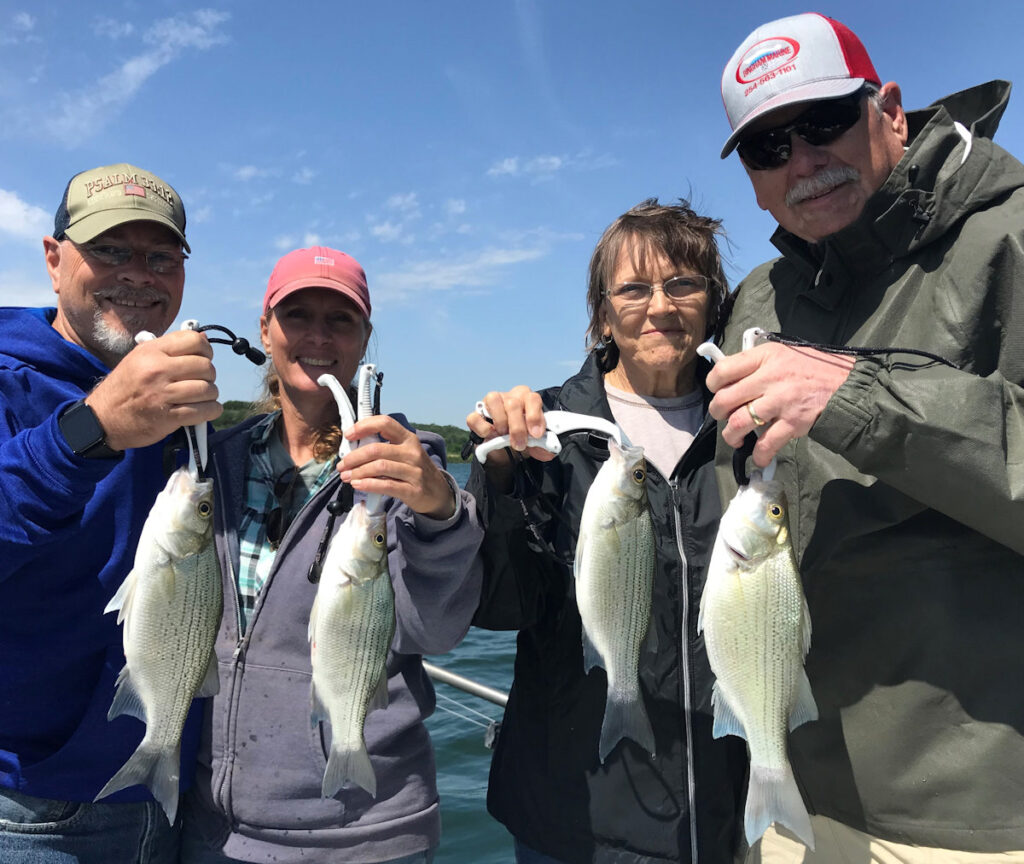 PHOTO CAPTION:  From left: Jerry and Cheryl Saikley, and Ann and Mike Foegelle.  This crew of four landed 164 fish (all white bass) on Lake Belton as a cold front blew in from the NW. 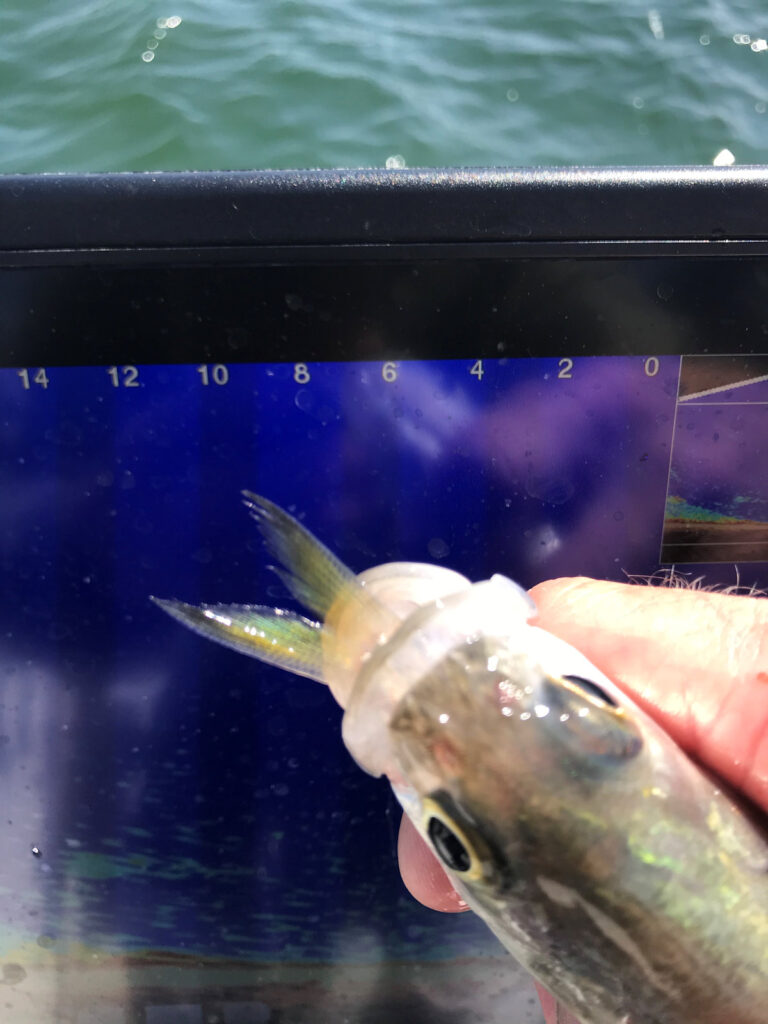 PHOTO CAPTION:  Greedy!  This Lake Belton white bass had obviously just fed on a huge threadfin shad which was still not all the way down its gullet when it pursued one of our MAL Lures and was hooked.  The fish are definitely feeding hard as the water warms!

Fishing was made pretty easy this morning thanks to an incoming cold front which had NW winds cranked up to ~12 mph before sunrise and increasing to ~15 with higher gusts by mid-morning.  This followed a night of turbulent weather in which local communities saw thunder, lightning, high winds, rain, and some hail.

The front was pretty mild, with a sunrise air temperature dropped down only to 68F.

We fished just three areas this morning, finding fish at all of them and working the MAL Lures vertically in conjunction with Garmin LiveScope to make the most of what we’d found.

The first area we fished required that we move routinely in “short hops” a few boat-lengths at at time, as the fish were a bit reluctant to move horizontally to come to the commotion we were creating by catching fish.

The catch we made from 44 to 51 feet at this first area consisted of the best proportion of quality whites to sub-legal and just-legal fish I’ve had come out of Belton thus far in the 2021 season.  All fish were spawned out, but not thin or lanky-looking.  They have definitely been feeding and had some bulge to their abdomens.  Many regurgitated partially digested shad and/or defecated.

Around the 3 hour mark we made a “bio-break” just as the winds were peaking around NNW16 and opted not to return to the exposure of the area we’d just left thereafter.  Instead we headed to a more sheltered area. We’d landed 121 fish up to this point.

After doing some looking, I found fish in two more areas, the first in 44′, and the second in 41′.  We landed a total of 43 more fish at these two areas, but only a half-dozen of these were keeper size and those were just barely so.

We closed out the trip right around 11AM with 164 fish landed for our efforts. 100% of the catch was white bass.

Water Surface Temp: 69.6F (after a very windy, hot Monday afternoon, hitting the 90’s area wide before the storms moved in around 10PM

Wind Speed & Direction: NNW12 at sunrise, ramping steadily up to NNW15-16 by mid-morning. 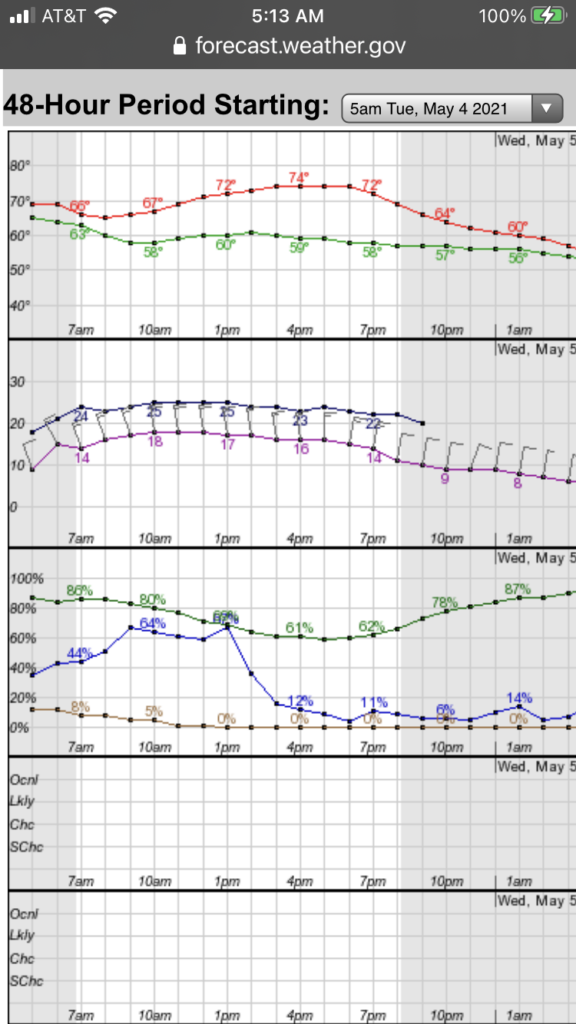