WHO I FISHED WITH:  This morning, Tuesday, February 26th, I fished Mr. Marcus Robinson and his wife, Kim.  The two left their home near Austin to spend a few days at a cottage nestled along the banks of Lake Belton to celebrate their 43rd wedding anniversary. Over the years, Marcus has worked in industry, including stints with Nabisco and Texas Instruments, then at age 33, went into full time ministry from which he has recently retired.  Kim, after raising two sons, now serves as a nanny.  Marcus is transitioning from kayak angling to fishing from a boat and so had a keen interest in the sonar, trolling motor, battery, and flooring setup I have in my boat, as well as in the vertical tactics we used, which were very new to him. 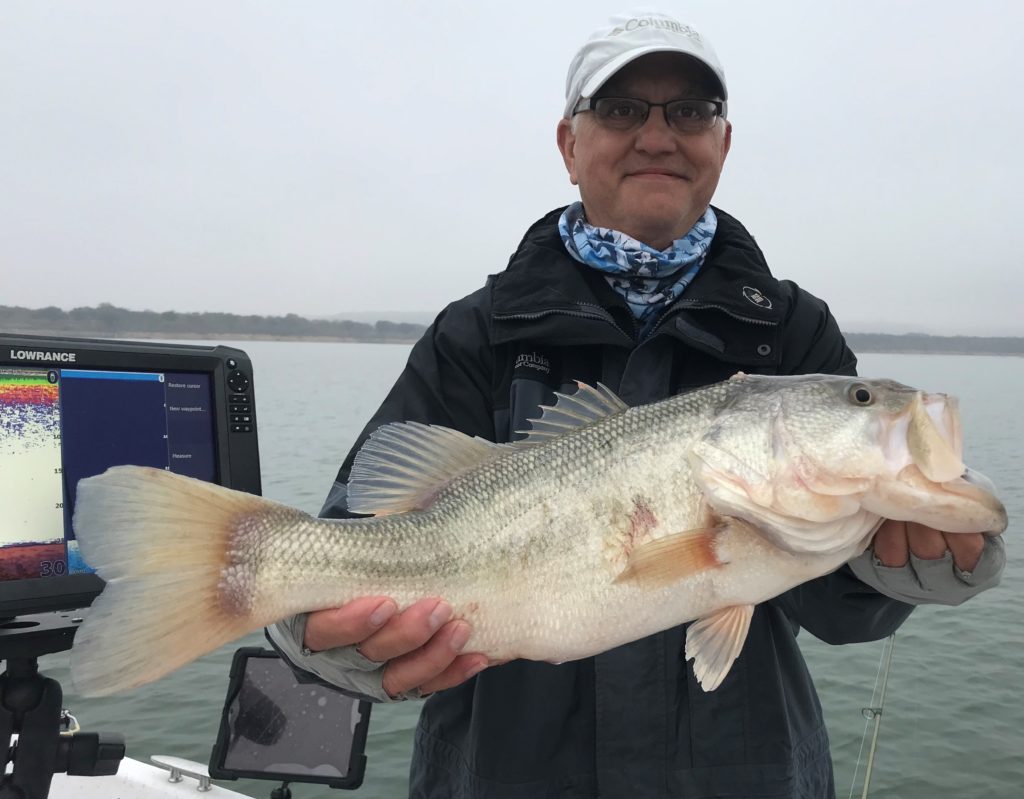 Marcus landed this old gal in the opening minutes of this morning’s trip.  This battle-scarred baby took a 3/8 oz. Hazy Eye Slab with Hazy Eye Stinger Hook in 30 feet of water and then gave a real good account of herself on the light spinning tackle we were pursuing white bass with. 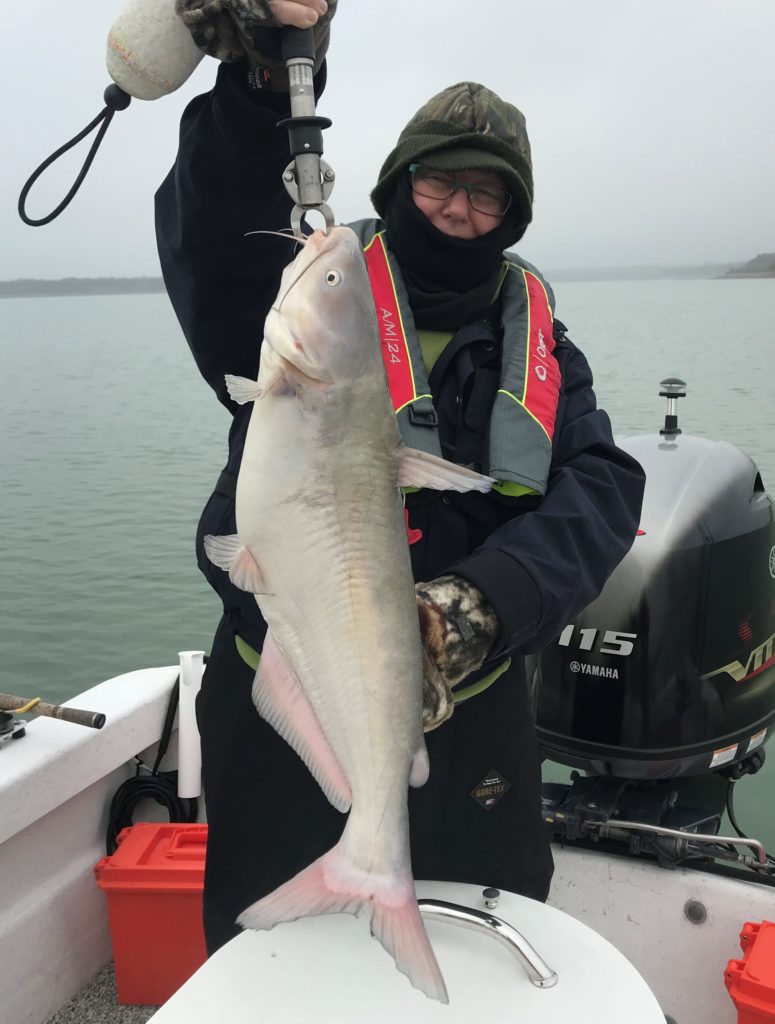 Something is going on with Stillhouse bluecat.  I’ve now had a blue cat over 5 pound come aboard on each of my last 4 trips, which is more blue cat than I’ve seen in the last decade!  Either someone did some “midnight stocking”, or the zebra mussels are fueling a bluecat revival.  Regardless, Kim was glad this rascal obliged!

WHERE WE FISHED: Stillhouse Hollow Reservoir
WHEN WE FISHED: Tuesday, 26 Feb., 2019

HOW WE FISHED: The Robinsons were limited to either Monday or Tuesday this week, so, come Saturday, I studied the weather closely and made my best estimate that today’s weather would produce better than yesterday morning’s bright, calm conditions.  In hindsight, I feel that was a good call, as yesterday was, indeed, bright and calm and, as I scouted around the lake I saw no birds flying in search of bait during the most critical first 2.5 hours following sunrise. Additionally, Marcus had a concern about the impact of the cold and damp on Kim; today was 10 degrees warmer at sunrise than the day before.

All of that, however, still doesn’t mean today was a red-letter day.  We had only a 6-7mph breeze through 9:50, which then died until around 11:50, and we also experienced a thin fog from around 8:00 until 10:00, so we did not have either the brightening of the sky or a sudden wind shift/increase to trigger the fish.

The fish and birds were both fairly lackadaisical this morning, forcing us to move routinely and permitting us to pick up just a few fish at each stop we made with no more than 8-10 caught at any one area.  In general, the fish were in 27-32′ during the time the breeze blew, then we had to search deeper, 50+ foot water to get bit once the wind died.

All but 8 of our fish were landed on the Hazy Eye Slab with Hazy Eye Stinger hook attached, in color white and 3/8 oz. size.  Those other 8 came on bladebaits.

OBSERVATIONS:  We observed no suspended fish today, in fact, most all of the fish we observed were nearly flat to bottom.  The fish really did not respond all that well to the thumper; I think it kept the resident fish resident, but didn’t draw other fish in. The bird action, though helpful, involved a lot more flying than feeding this morning.

Sky Conditions:   ~50% cloud cover at sunrise, clearing to under 10% cloud cover by 10am, then with a high, thin, grey layer of clouds moving in as the winds spiked around 10am. 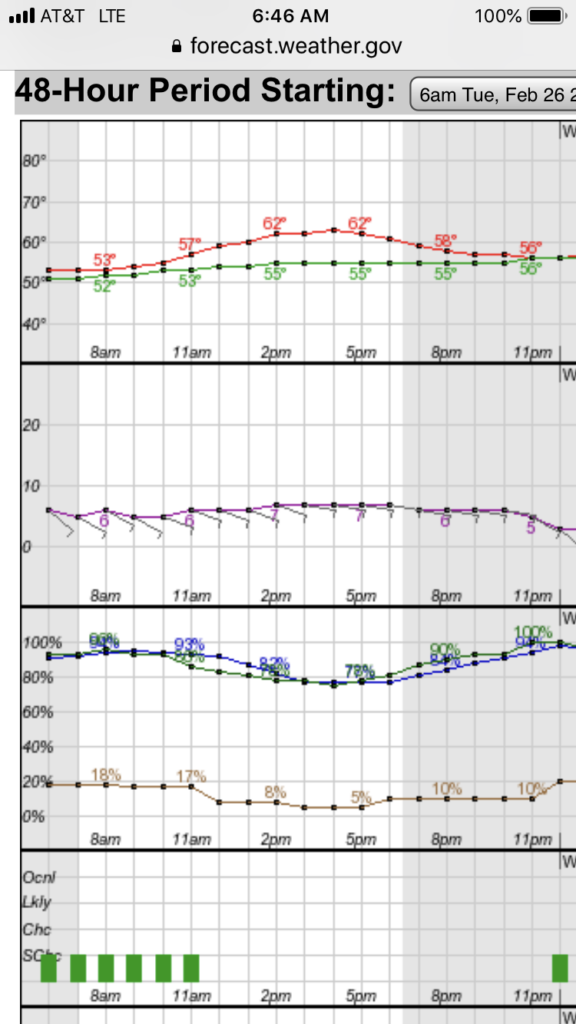 **Area 1195 moderate action on snapjigging at edge of channel

WHO I FISHED WITH:  This morning, Saturday, February 23rd, I fished with Mr. Doug Streater, his son-in-law, Travis Anthony, and Travis’ son, Colby — three generations aboard for a white bass fishing trip on a balmy late-winter morning.  Doug serves as the president of Extraco Bank and is headquartered in Temple, TX, Travis is a Scott & White orthopedic surgeon working at Metroplex in Killeen, and Colby is an about-to-turn-10 young man who enjoys playing baseball.

Doug was referred my way by both Steve Niemeier and James Caddell — thanks, fellows!! 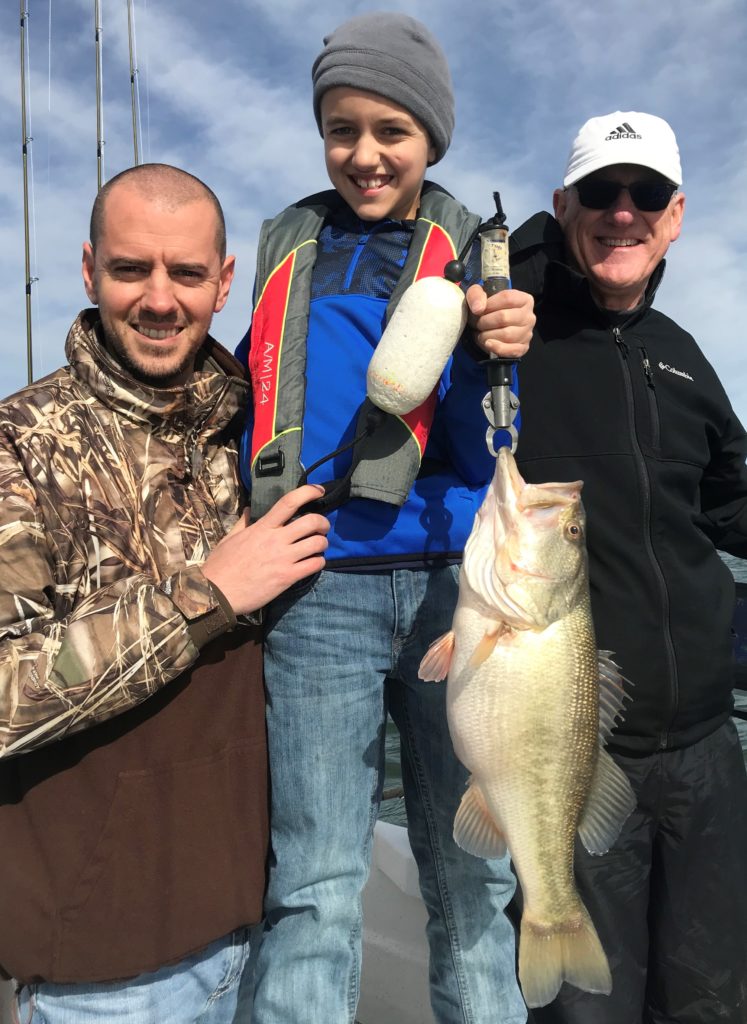 From left: Travis Anthony, his son, Colby with a 5.25 pound largemouth, and Colby’s grandpa, Doug Streater.  This fish looked as though it had just downed a large sunfish or small white bass.  Colby did a great job of hanging on and bringing it to net from out of 44 feet of water. 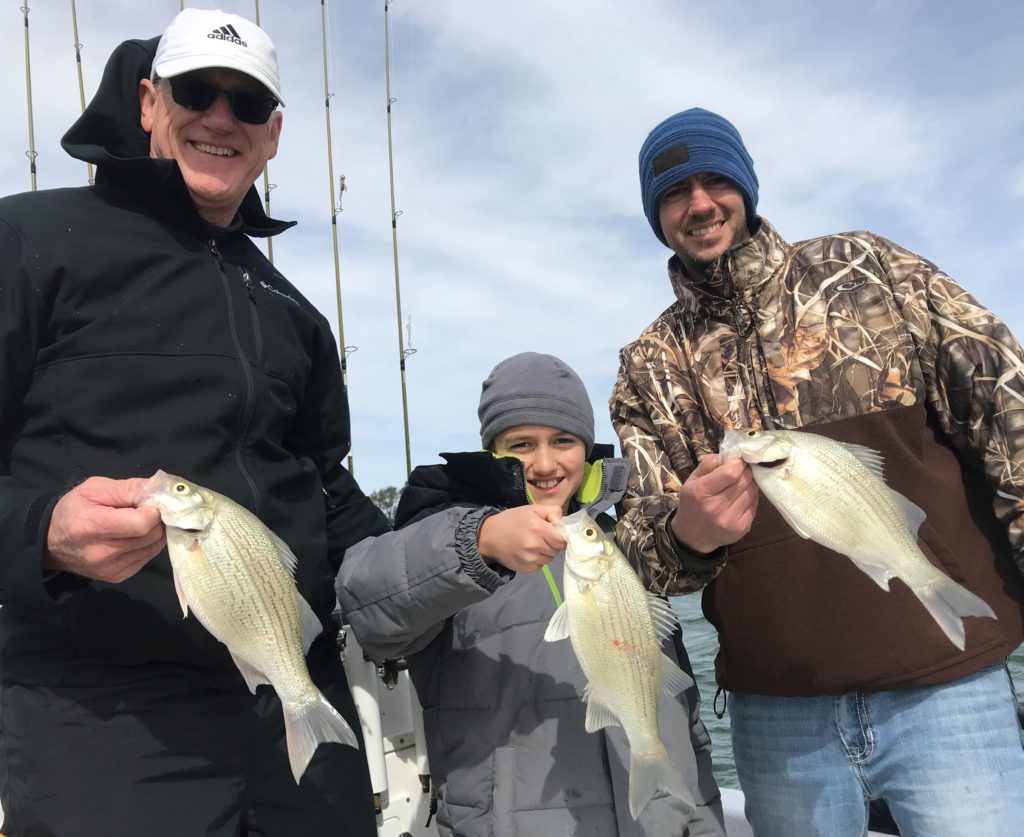 From left: Doug Streater, Colby Anthony, and Travis Anthony with a sampling of the quality white bass we landed on our windy morning on Stillhouse Hollow.  All of these fish were very wide, healthy fish.

HOW WE FISHED:  I touched base with Doug back on Thursday when the NOAA forecast indicated the entire day Saturday would be a blowout due to high winds.  We decided then to make a final call around 8:45pm on Friday evening after the forecast had been revised a number of times.  As we compared notes on Friday evening, it looked like we’d get at least 3 good hours in with the winds under 18mph.  As the sun rose, shrouded by a layer of grey clouds to the east, winds were right at W10.  We did, indeed, get in exactly 3 hours of solid fishing.  Nearly at the stroke of 10, the birds which had been feeding steadily and helping point the way to fish either lighted on the water or began doing a lot more looking than feeding, and our catch rate dropped off sharply at that point.

During those productive first three hours, we alternated between snapjigging and easing, with only one instance of slow smoking, all with 3/8 oz. slabs.  Around 8:45am I spotted gulls working as shallow as we would find them all morning and threw bladebaits under them, but only wound up hooking and landing two fish with this approach.

Although we caught fish steadily, the bite never got on fire this morning — it was more of a steady pluck until 10am.  Around 10:15, in addition to the morning feed wrapping up, we also saw a rapid ramp-up in wind speed to over 20mph with occasional higher gusts.  Boat control became an issue and, despite consistently placing ourselves under the only remaining actively working gulls on the lake, we had difficulty seeing the gamefish driving the baitfish they were sipping off the surface, much less catching them.

The highlight of the trip came when Colby landed a 5.25 pound largemouth from out of 44 feet of water on his light spinning rod geared for white bass.  The fish had an oddly distended belly — I suspect it had just swallowed a large sunfish or a small white bass.

All but two of our fish were landed on the Hazy Eye Slab with Hazy Eye Stinger hook attached, in color white and 3/8 oz. size.

OBSERVATIONS:  This morning we observed the greatest number of actively feeding birds I’ve seen on Stillhouse all winter, since the first migrants arrived in mid-November.

Sky Conditions:   ~50% cloud cover at sunrise, clearing to under 10% cloud cover by 10am, then with a high, thin, grey layer of clouds moving in as the winds spiked around 10am. 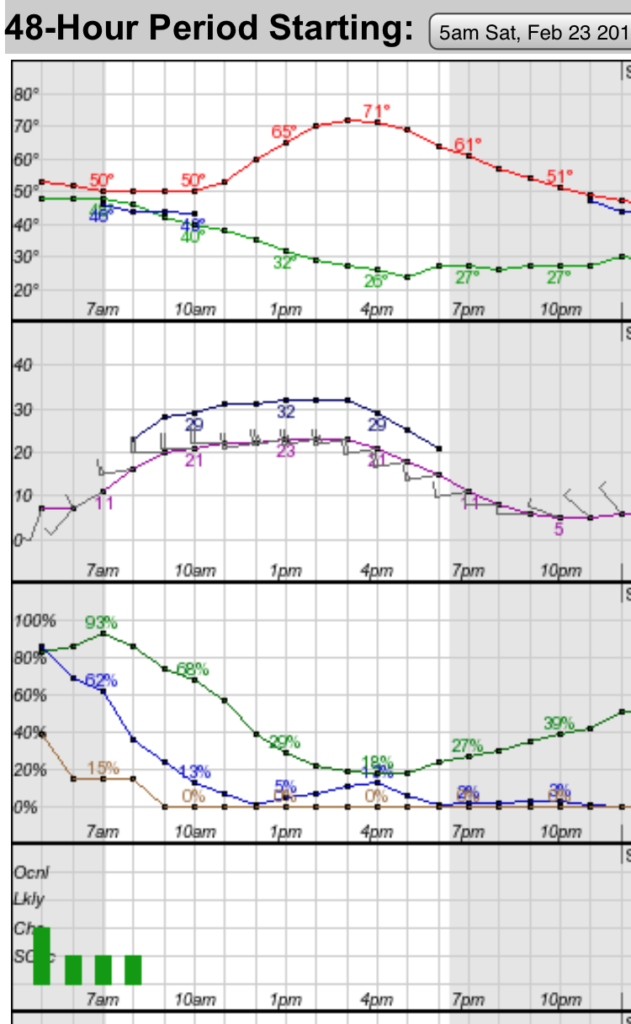 **Area SH0093C to 052 (fish found throughout this area, well-spread, under birds) – snapjigging and easing for the most productive span of the morning

WHO I FISHED WITH:  This morning, Saturday, February 2nd, I fished with Austin Fly Fishers member Dave Bush.  We welcomed aboard 8-year-old Jarrett Rowell for the first Soldiers’ Kids Involved in Fishing Fun (S.K.I.F.F.) trip of the 2019 season.

Jarrett had been patiently waiting for this trip since before Christmas, as foul weather forced two postponements.  Jarrett’s mom, Lesa Rowell, initially contacted me after hearing of the S.K.I.F.F. program from another mom at her church.

SKIFF serves to put the kids of soldiers on the water at times when duty pulls parents away from their families.  Begun in 2009, SKIFF offers trips free of charge to any military family wherein kids are separated from their parent due to that parent’s military obligations from short-term commitments like gunnery or field time at Ft. Hood, to lengthy deployments, and anything in between.  Simply call me, Bob Maindelle, at 254.368.7411 to reserve a date. 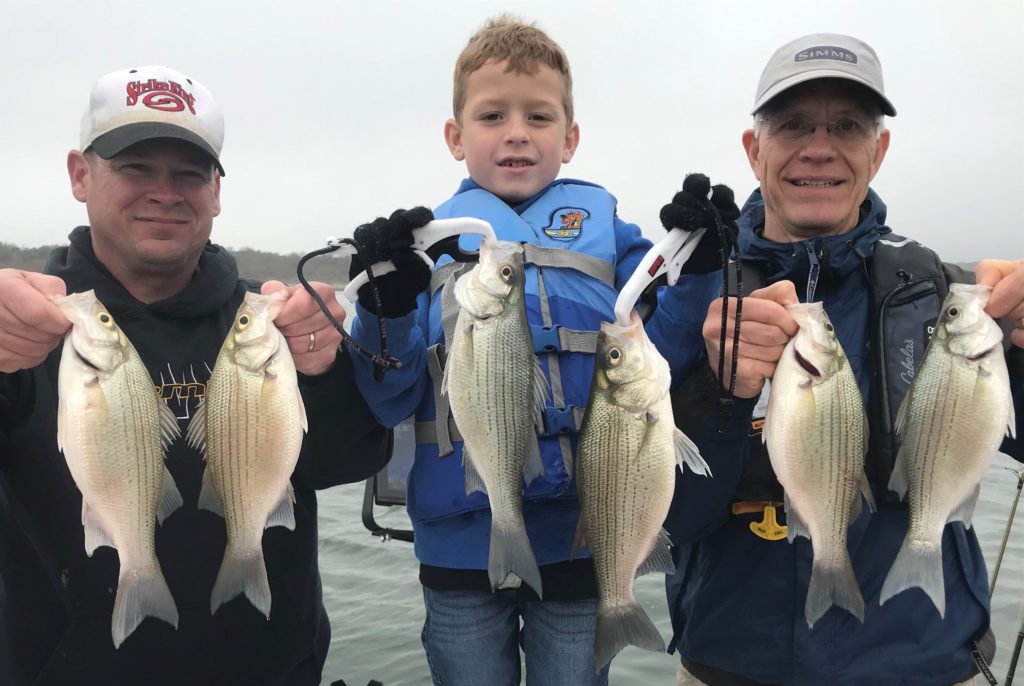 HOW WE FISHED:  It just so happened that on Sunday, January 27th, Jarrett’s dad, U.S. Army Sergeant First Class Matthew Rowell, redeployed to the United States from a split tour to Iraq and Kuwait as a field artilleryman.  Therefore, he was able to join his son on this SKIFF trip!

The ambient temperature was about 55F as father and son stepped aboard my boat at 7:30am on Stillhouse Hollow Reservoir, just west of Salado.  The reservoir stood at 4.79 feet above full pool and was dropping fairly quickly, with a 24-hour fall of 0.61 feet as the Corps of Engineers released 3,180 cubic feet per second of water through the dam.

After a safety talk, adjusting equipment for my guests, and a word of prayer, we headed to the fishing grounds strictly relying upon GPS to navigate in the thick fog.

As we reached a main lake point, we deployed a pair of crankbaits to attempt some flat-line trolling for white bass.  In about 30 minutes of effort we got only one strike which resulted in a missed fish.

I had warned everyone that our first hour would likely be slow, as it typically is with foggy, calm conditions.

Around 8:20 am, our luck changed when the lightest of ESE winds began to ripple the surface.  This kicked off the morning white bass feed.  As white bass fed on threadfin shad from below, they drove bait toward the surface where ring-billed gulls dipped down to pick up dead and injured forage.

The white birds were tough to spot in the fog, but we got to them and confirmed the presence of fish with sonar.  The fish were tight to the bottom, but were ready to feed.

We all dropped 3/8 oz. slabs of my own design, equipped with a Hazy Eye Stinger Hook, to the bottom and used a “smoking” retrieve to tempt these active fish.  Young Jarrett went 5 for 5 on his first several attempts at the technique, each time landing a white bass between 12-13 inches.

As we three adults also hooked fish, we passed them off to Jarrett to reel in if he wasn’t already engaged with a fish of his own.

We fished three distinct locations over the 4 hour span of the trip, amassing a catch of 82 fish including approximately 4 drum, 1 blue catfish, and the balance consisting of white bass.

One of these fish is a pending lake record … but more on that when TPWD certifies the catch!!

As the trip concluded, we presented Jarrett with his own red tacklebox with an assortment of gear inside, a closed-faced rod and reel, and a red, logoed S.K.I.F.F. ballcap, all provided by Dave Hill and Manuel Pena.

OBSERVATIONS:  Calm, foggy conditions (as usual) produced poor results; once the slightest of breezes began and the light level rose a bit, the fish turned on and stayed actively biting from about 8:20 through to around 11:30.

Wind Speed & Direction: Winds were calm through 8:20, then began out of the ESE at 3-4, slowly increasing to 7-9 and turning SE. 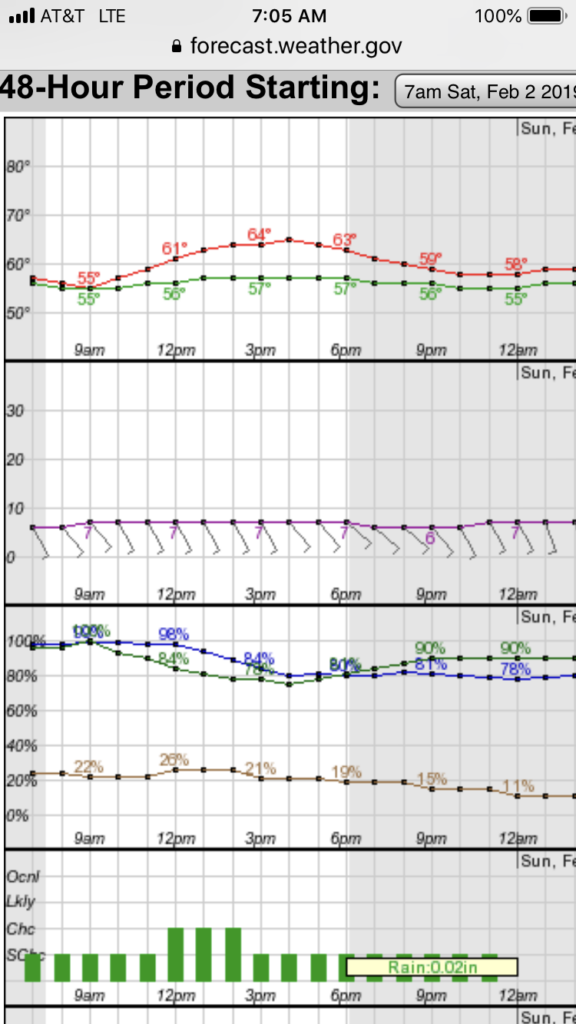