WHO I FISHED WITH: This morning, Wednesday, November 20th, I was joined by Dwight Stone on what would be his fifth trip out with me since mid-September of this year.  After a solo trip with me on his first outing, he has brought a buddy out with him each time thereafter.  Today, I welcomed Jay Stien aboard for the first time.  He and Dwight first became acquainted at the church they both attend down near Georgetown, TX. 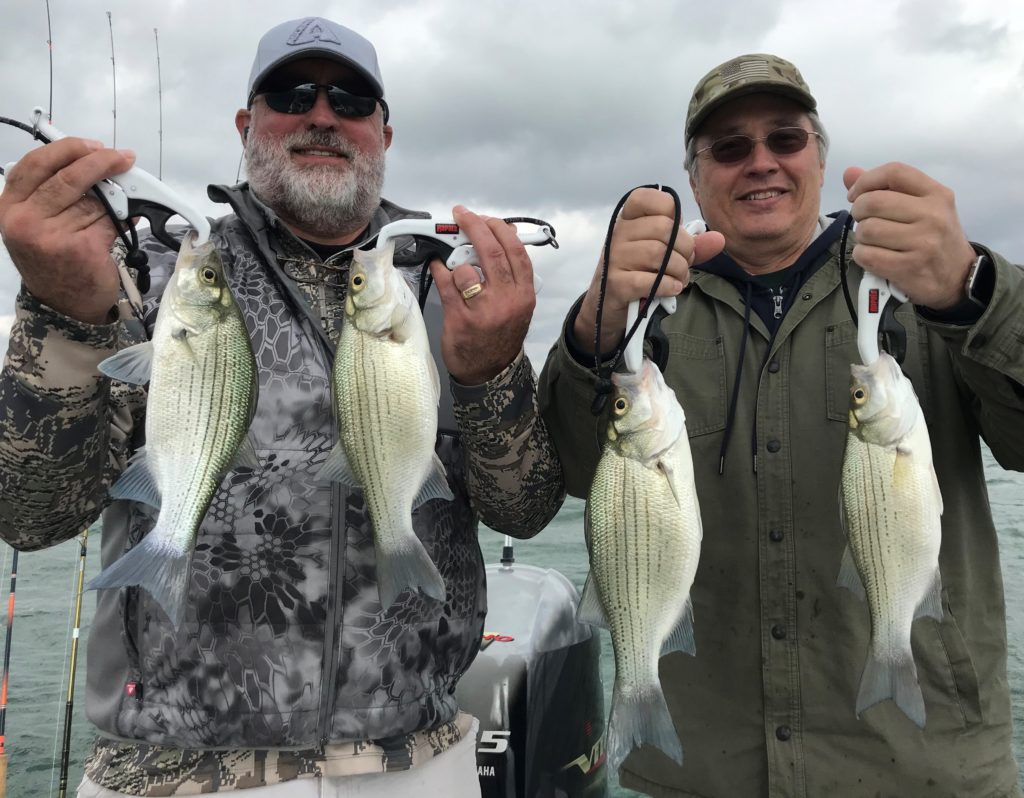 PHOTO CAPTION #1:  We left high numbers of smaller white bass behind at Lake Belton this morning in pursuit of larger white bass over on Stillhouse and were not disappointed.  That’s Dwight Stone on the left and his friend, Jay Stien.  The largest white bass we landed (in Jay’s right hand), taped at 14 3/8 inches.  All but one of our fish came on a Hazy Eye Slab equipped with a stinger hook.  The 3/8 oz. version in white did the trick.

HOW WE FISHED:  Since this was to be Dwight’s fifth trip with me since mid-September, I offered an option to the high counts of mostly smaller fish which has been the trend this fall at Lake Belton.  I offered that we could introduce him to Stillhouse Hollow in hopes of catching better quality fish.  The weather looked very good (grey clouds and wind) and I had successfully scouted on Stillhouse last Wednesday just for such an occasion.  I explained the downsides would be a lower tally, and that catfish would not be an option — Dwight was okay with all of the above, so, at 7AM we launched and began the search for fish.

All of our fishing took place today within yards of the old Lampasas River channel as the white bass we found came and positioned on the breaklines from the old flood plain down into the channel proper.

Four tentative gulls led us to our first stop where we landed only one white and missed several more in addition to missing a nice ~4 pound largemouth, all on bladebaits.

After this, we switched over to slabs (with stinger hooks) and used a long easing stroke to tempt fish successfully in under 15 feet of water.  Eventually, these fish quit biting after we’d boated another 47 fish at this location.

Around 9:30 we made our next move into deeper water — about 36′ — and this time encountered schooled, suspended fish between 25 and 30 feet deep.  Using Garmin LiveScope to gauge fish location and response to our presentations, we brought our slabs up past these suspended fish to provoke a response.  We noted that our catch included quite a number of both largemouth bass and freshwater drum.  The largemouth are very clearly  drawn to the thumper.

By 10:45 this school of fish, from which we’d caught another 30 fish, dissipated and we continued our search.  We found one more small “patch” of fish about 80 yards from our previous stop, landed a final 4 fish and, with the wind now gusting to over 20mph, checked two more areas, found nothing, and wrapped up in hopes of getting Dwight and Jay over to Miller’s Smokehouse in Belton before Mr. Dirk ran out of smoked chicken!

Not only has a visit to Miller’s become a part of Dwight’s routine when fishing with me, he also has his wife addicted now.  They made a special, non-fishing related trip up this way recently, and stopped in only to find that the chicken was sold out by around 1pm.  He was not going to let that happen to Jay today!!!

OBSERVATIONS: As the water cools, it has become obvious that the thumper is again becoming more helpful in drawing and keeping fish below the boat.  The suspicion I had about the tailspinners’ efficacy tapering off at the 60F mark was further confirmed today.

Sky Conditions:  Grey overcast the entire morning, with the lightest veil of fog before sunrise. 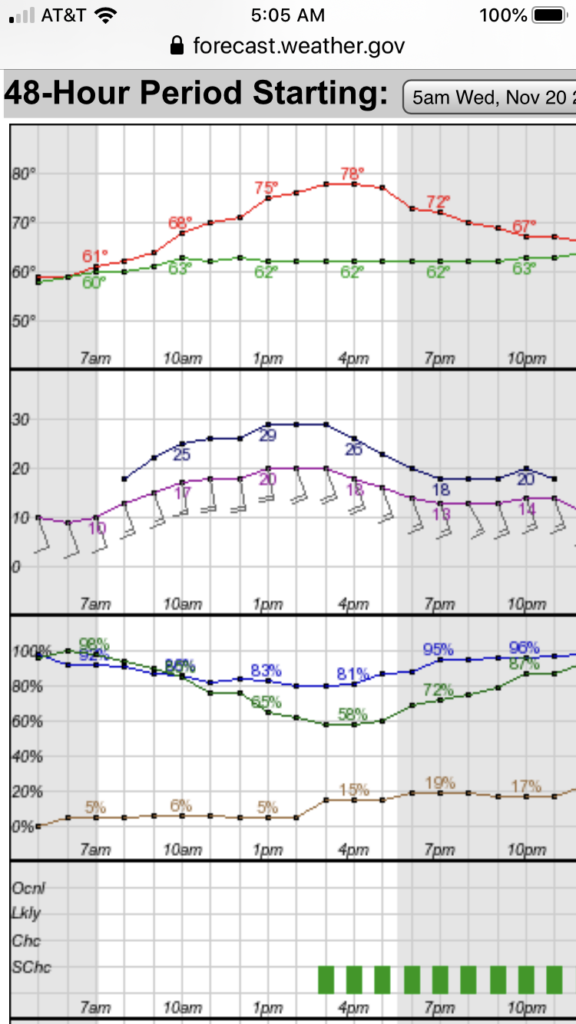