WHO I FISHED WITH:  This morning, Tuesday, May 10th, I fished returning guests Frank Sumner and Steve Arnold — both veterans, both employed in the medical field, and both active in men’s ministry at their church.

It so happened that Steve was wearing one of these “Fit Bit” style watches which counts your steps daily.  Experts say 10,000 steps is a healthy daily goal.

Well, Steve discovered that his watch registered a “step” every time he made a full turn of his spinning reel’s handle.  Steve racked up exactly 7,503 “steps” as he landed his fair share of the 139 fish he and Frank brought over the gunwales this morning.   That’s a pretty good workout without even breaking a sweat!

As they departed today, Frank signed up for yet another “workout session” in early November!

My next openings will be on June 29 and July 5.  Weekday mornings are always best.  Saturdays are available for on-the-water sonar training sessions (only) until after Labor Day when I’ll again offer Saturday morning fishing trips (until mid-March 2023). 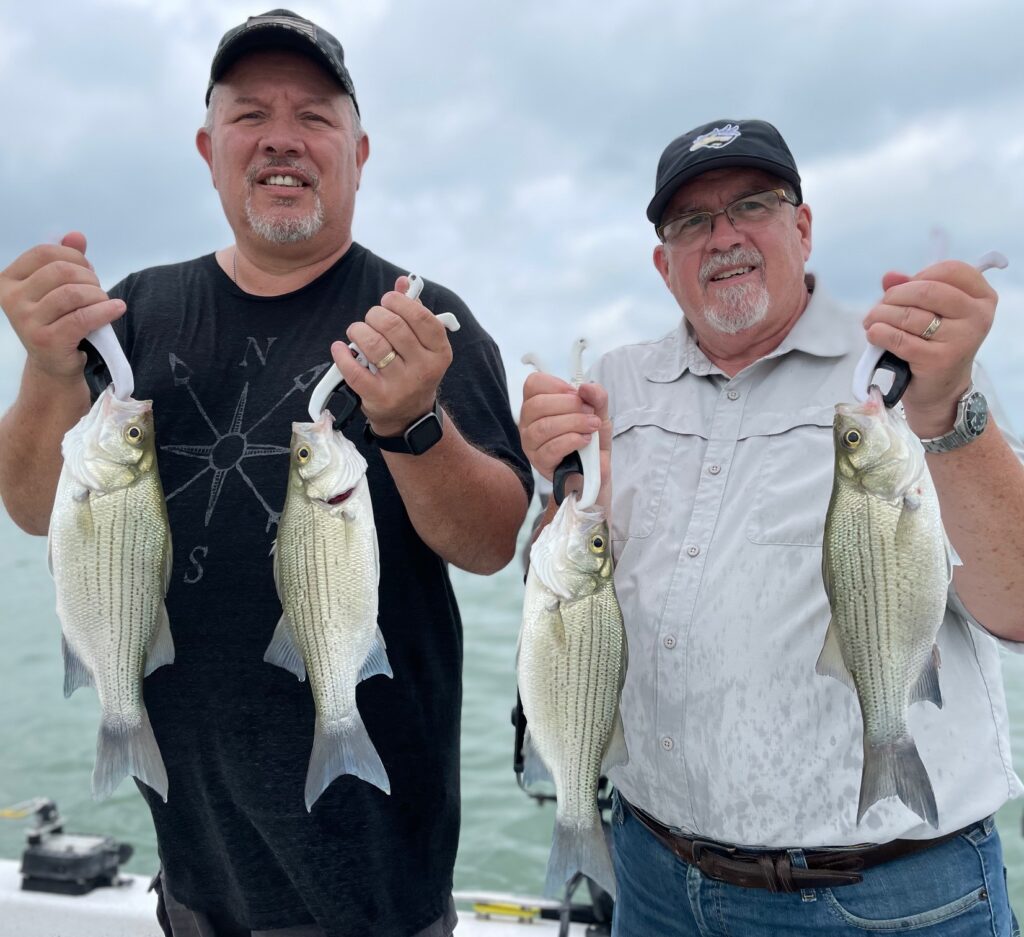 PHOTO CAPTION:  From left: Fishing buddies Steve Arnold and Frank Sumner with a sampling of their 139 fish haul from Lake Belton this morning.  As always, 100% of our catch was released. 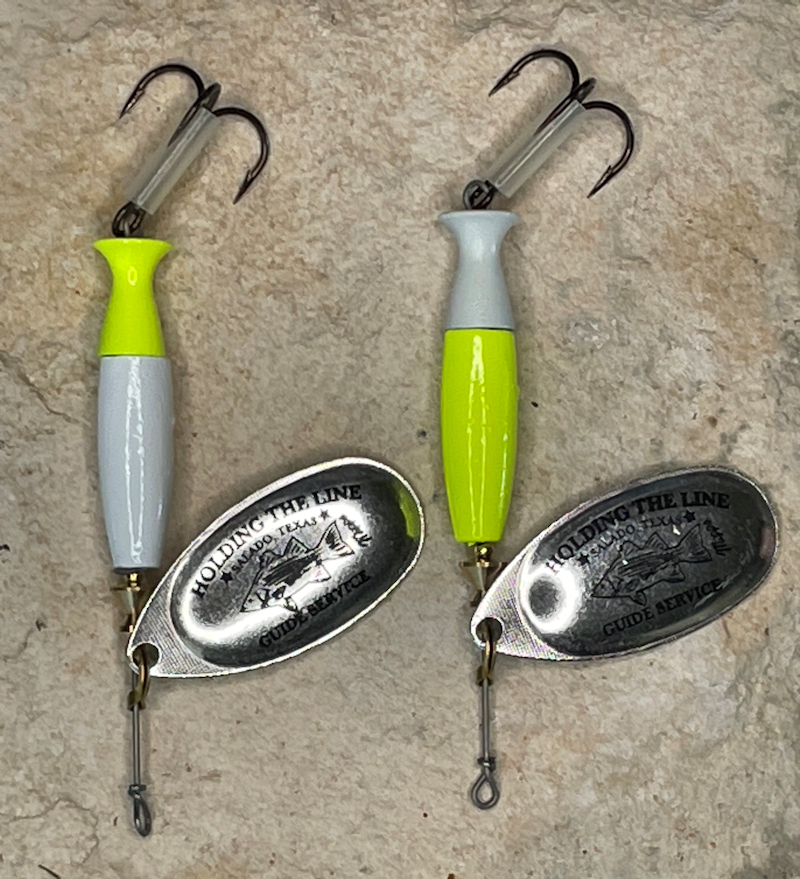 PHOTO CAPTION:  The fast-sinking MAL Dense with white body and chartreuse tail was the only lure we used today.  Minimizing time spent waiting for the lure to return to the bottom was the key to this lure’s success after we found our fish in 42 feet of water.

The fish apparently “slept in” a bit this morning.  In our first 75 minutes on the water, we landed a grand total of four fish.  Although I found a few pockets with a few fish here and there, I looked over several typically productive areas and found no organized schools of fish at any of them.

Finally, after slowly combing over four other areas with little to show for it, I found a good concentration of fish in 42 feet of water.  Side-imaging revealed multiple schools, each with well over 100 fish in them.  We prepared to fish vertically by Spot-Locking atop these fish, getting the Garmin LiveScope adjusted, etc.  As we let down and began working our baits with a “smoking” tactic, the response was pretty lackluster.

I was loathe to leave given the number of fish here and the scarcity elsewhere, so, I decided to stick it out and see if the strength of the bite would increase.  Well, it did.

By 9:05, it was all I could do to unhook and release fish at the rate Frank and Steve were catching them.  This went on for about 50 minutes.  During this time we saw fish moving more rapidly as they swam parallel to the bottom; we also saw fish occasionally drive shad to the surface.  Then, slowly but surely, the aggression level of the fish subsided until, by 11AM, it was over.  The fish never got sparse enough for me to consider a move, so, we wound up catching the entire trip’s worth of fish at just this one location.

We used the MAL Dense with white body and chartreuse tail 100% of the trip.  We experimented with a horizontal “sawtooth” retrieve a few times as the action was building, mainly to draw fish in toward the boat, although we did catch a few this way, as well.

A complete description of this “smoking:” method is found here: https://www.youtube.com/watch?v=jDSvfXgrAUE

OBSERVATIONS: Of note today was the size/quality of the fish we encountered.  Of the 139 fish we landed, only 3 were under the 10-inch legal limit.  This is a very rare occurrence on Lake Belton, which is more well known as a “high density” reservoir with strong numbers of smaller fish.  The strong shad spawn continues. 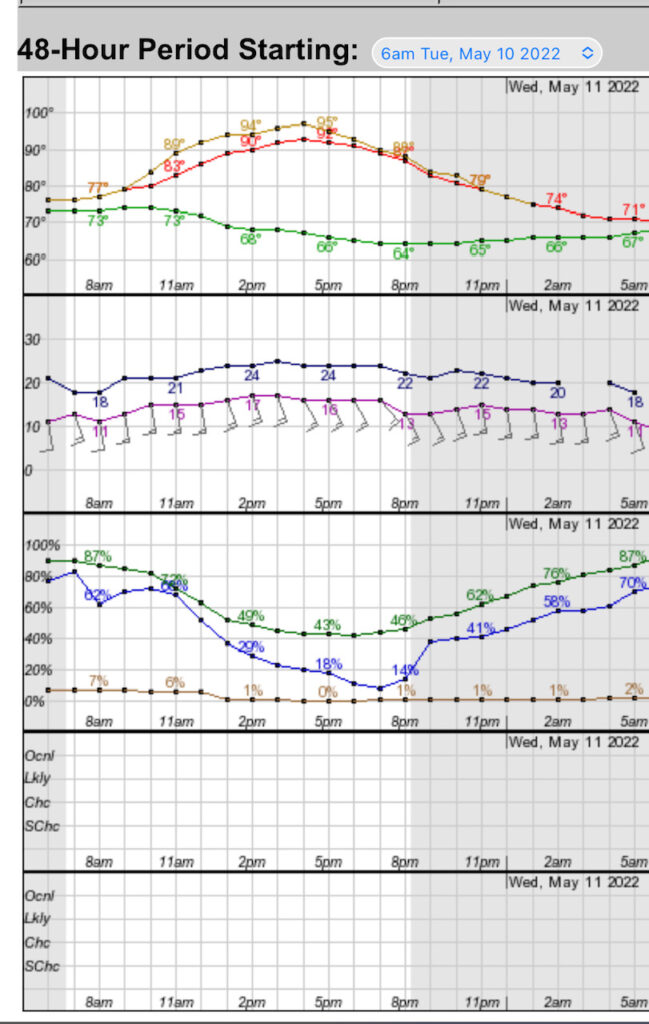