WHO I FISHED WITH:  This morning, Wednesday, July 6th, I fished with father-and-son team Rick and Cody Vincent of Salado, TX.

Rick, a fellow U.S. Army veteran, and I have known one another, having first gotten acquainted through church, for many years.  Despite the common interest in fishing, we’d never fished together.

So, when Rick reached out to me to schedule an 18th birthday fishing trip for his son, Cody, who is headed into his senior year in high school, I was really looking forward to the date.

Cody informed me during our trip that he is headed into the U.S. Navy after he graduates from high school.  Perhaps that’ll ensure he’ll always be near fishable waters as he serves the nation. 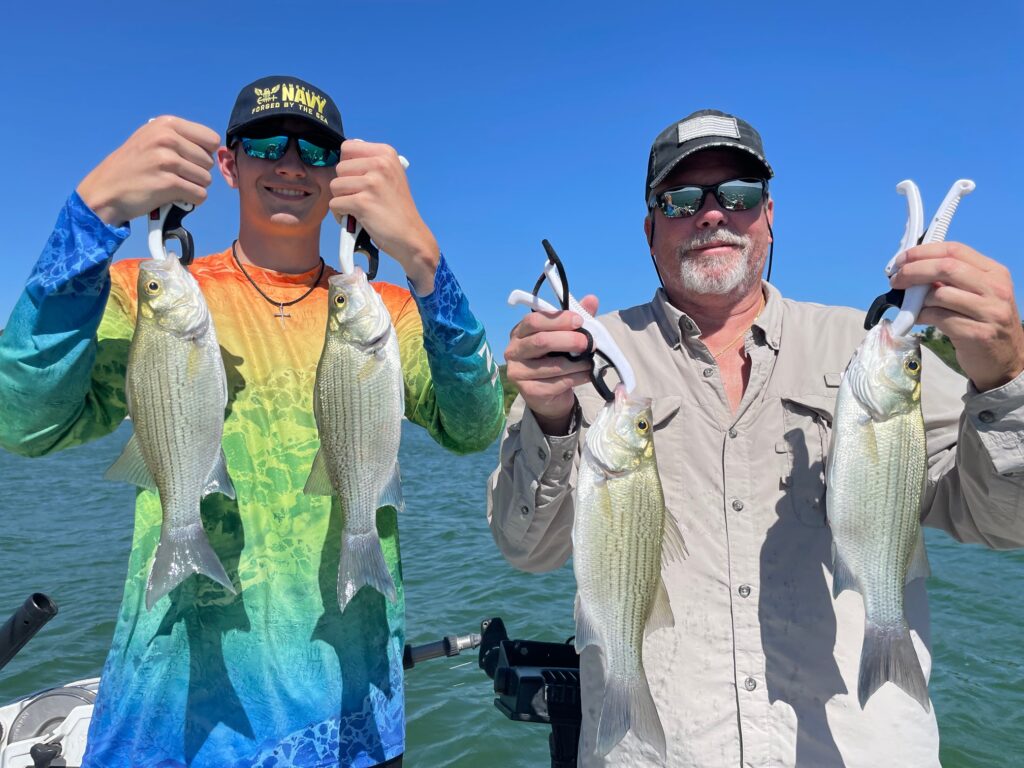 PHOTO CAPTION:  From left:  Rick and Cody Vincent with a take of hefty white bass from Lake Belton.  Although we caught fish using three tactics today, the most productive was using the MAL Dense with a horizontal sawtooth retrieve. 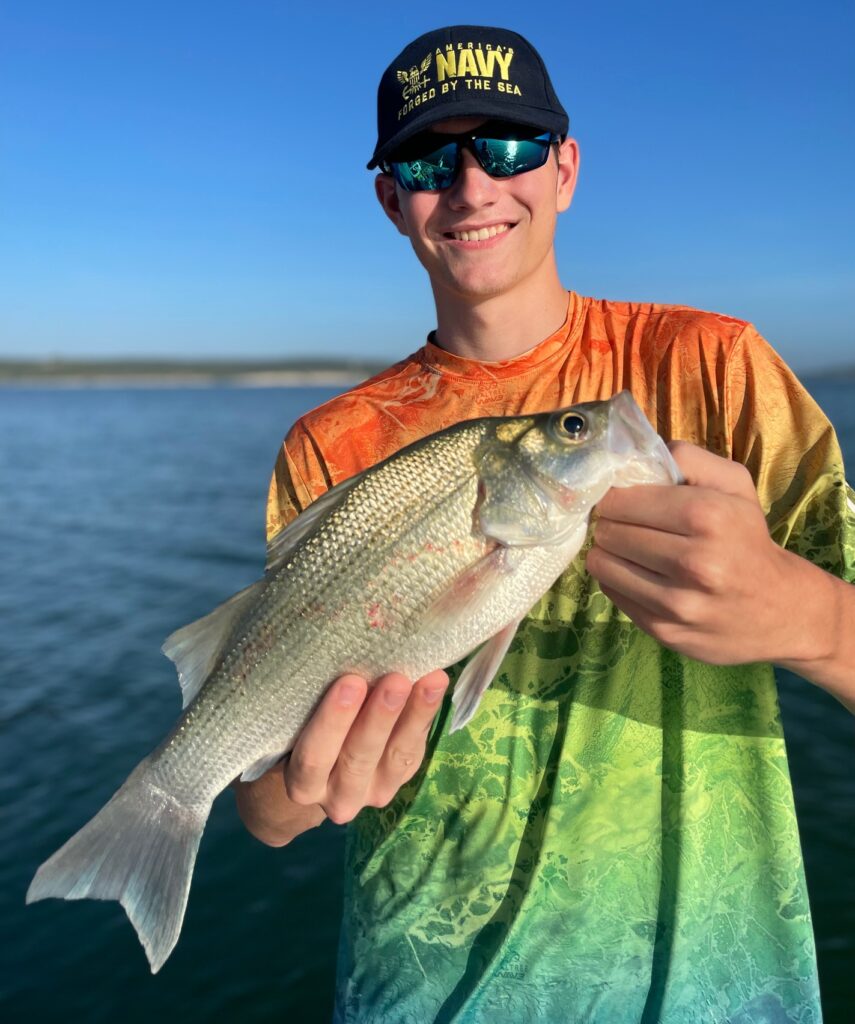 PHOTO CAPTION: Cody laid the groundwork today toward earning TPWD Elite Angler status with the capture of this 16 1/8″ white bass.  This fish fell for a MAL Dense with white body and chartreuse tail worked with a sawtooth retrieve in ~33 feet of water.  After taking the required photos, we released it in excellent condition. 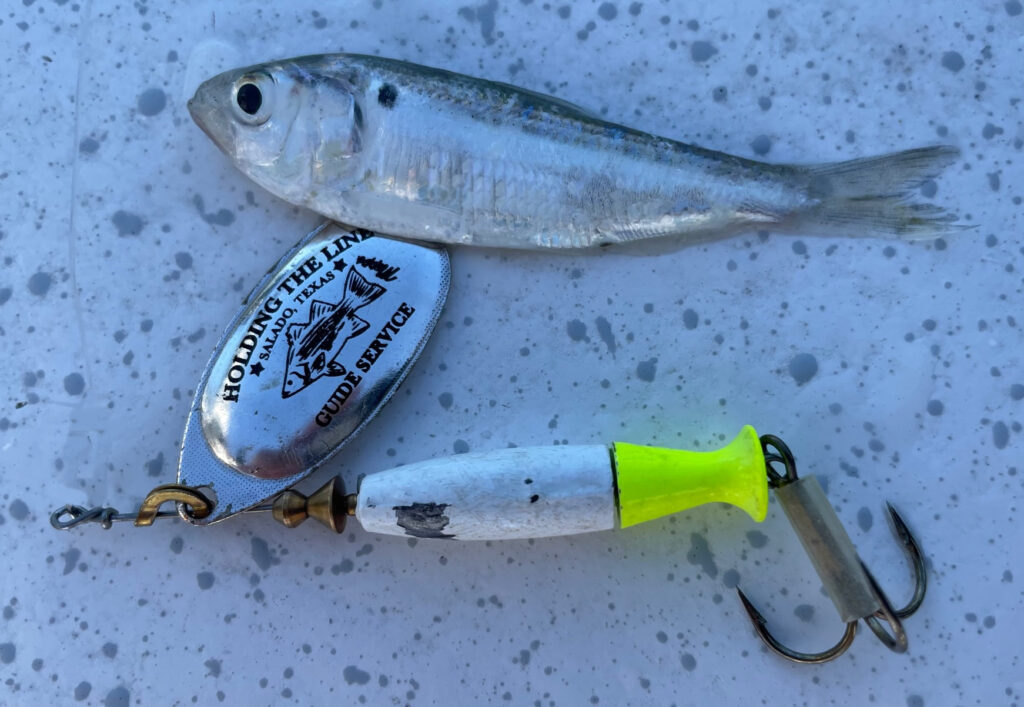 PHOTO CAPTION: The MAL Dense turned out to be a good match for the ~3″-long threadfin shad which the larger white bass we encountered were feeding on this morning.

I told Rick and Cody right off the bat this morning that I love having experienced anglers aboard when the fishing is tough (as it always is in June and July) because good anglers can help reach the full potential the fishery has to offer.  With less experienced anglers aboard, I becomes necessary to teach and coach before those anglers get the hang of things, and, going through that learning curve typically equates to a least a few fish not landed which otherwise could have been.

We began our day looking over a traditionally productive area with sonar while at the same time downrigging.  Within minutes, both Rick and Cody landed a single on downrigged Pet Spoons trailing behind a 3-armed umbrella rig.  Although this was a nice start, I did not see the volume of fish present in this area to make me want to stay, so, we moved on.

I put one man on the port and starboard pedestal seats on my front casting deck I as operated the trolling motor from the center pedestal to keep Rick and Cody within casting distance.  They landed 12 fish before the sun brightened sufficiently to push them down.

We moved on in search of suspended fish roaming and feeding on shad and found what we were after, but, the fish were definitely not feeding aggressively.  Over the timespan from 7:30 to 9:00, we added only 12 additional fish to our count as we moved repeatedly, only to find fish pretty disinterested.

As the wind increased and the morning moved on, the fish finally worked up into a feed and fed well from around 9A to around 10:15A, followed by a rapid tapering off of interest.  We Spot-Locked on, and stayed on, just one patch of bottom during this entire episode.  We began catching fish vertically, but, as I let the side-imaging play and frequently glanced at it, it began to reveal fish consistently located out to our starboard side.  I had Rick and Cody begin using a sawtooth method (which we’d practiced earlier for just such an occasion) and they began taking fish after fish in rapid succession.  By the time the feed was over, they’d landed an additional 49 fish for a final total of 73 fish landed on the morning.

OBSERVATIONS: The best feeding time ran from ~9 to 10:15A this morning, with a short spurt of topwater action right at sunrise which lasted only ~15-20 minutes. 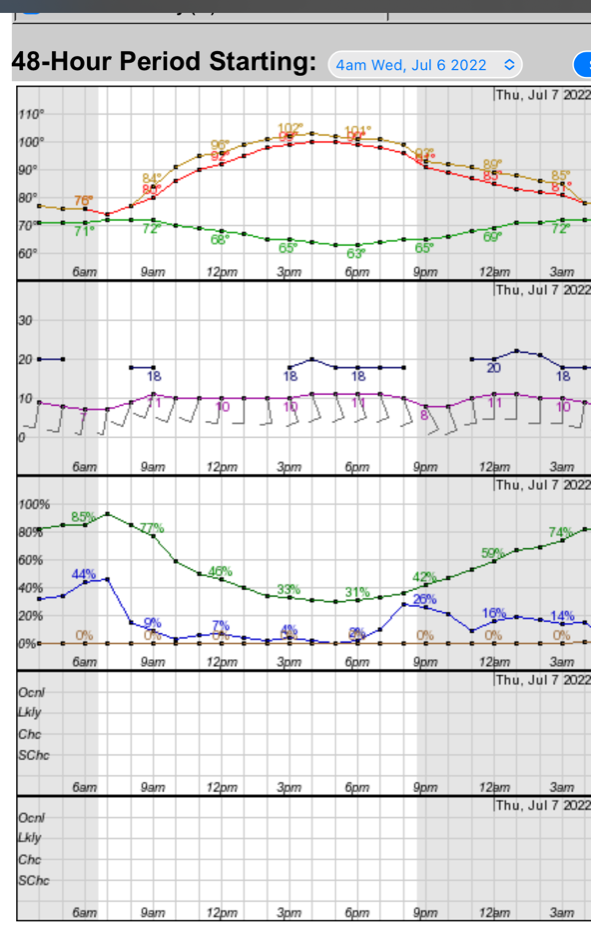