WHO I FISHED WITH:  This past Tuesday morning, February 19th, I fished with a crew of four young men from Georgetown, TX — 3 brothers and a buddy, all escorted by the brothers’ mom, Pam Carroll.

Pam called me while I was in the midst of conducting a guided trip on Monday morning.  As a single mom of three, she was trying hard to help her sons experience the great outdoors, but that wasn’t exactly going as planned.  The family had camped out in an RV at Cedar Breaks Park on Lake Georgetown and made several attempts at catching fish, but to no avail.  Kids got cranky.  Kids got lost.  Dog got lost.  Grandma got worn out.  Sister went home early with Grandma.  Mom started wondering what’s so great about the outdoors after all.

A quick Google search on her smart phone led her to me.  She indicated her interest in seeking “professional help” (her words, verbatim).  I chuckled.  We talked things over and, long story short, met at 7:15AM the following day on Stillhouse for a morning in pursuit of white bass (or anything else with scales) for Corban (11), Connor (9), Cade (8), and family friend Cooper Rhea (11). 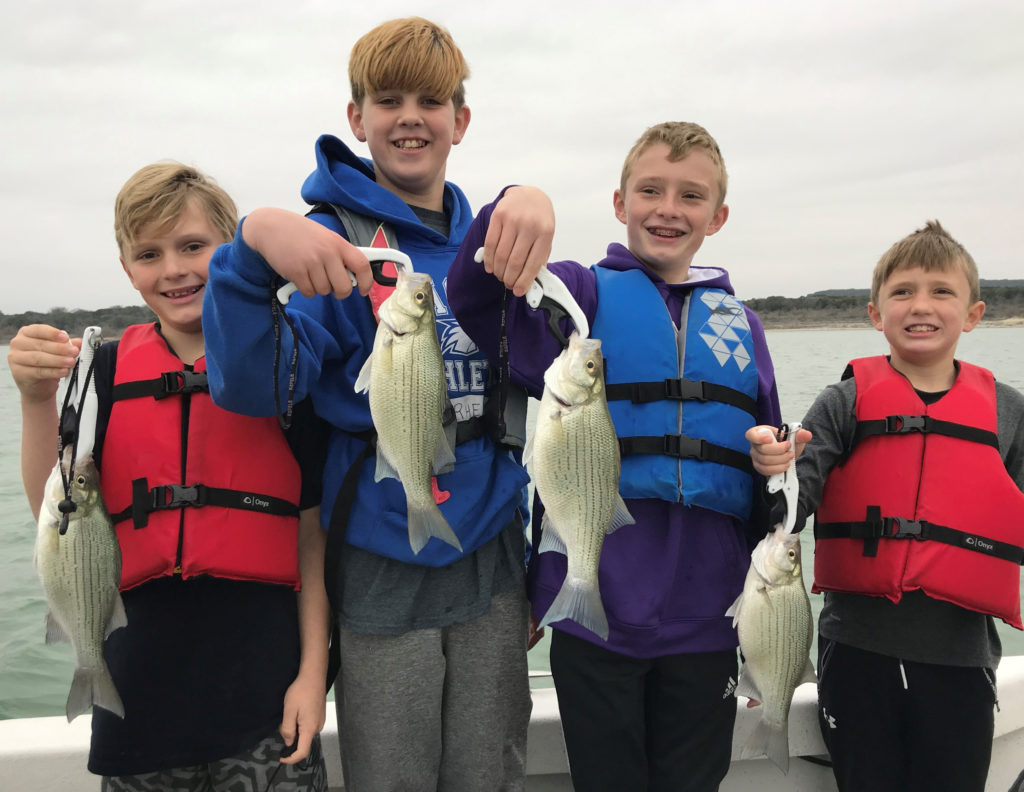 PHOTO CAPTION:   From left:  Connor Carroll, Cooper Rhea, Corban and Cade Carroll, all with evidence of their Presidents’ Day weekend fishing adventure success story that went down to the wire to in the making.

HOW WE FISHED:  The weather forecast was really up in the air.  No two of the sources I use for weather could agree on wind direction, wind speed, ambient temperature, chance of rain, etc.  It was clear that a cold front would arrive, but the timing was uncertain.  As I headed to bed on Monday night, the wake-up air temperature was due to be 53F.  When my alarm went off just before 5AM, it was 64F.  I read my Bible, then looked at my weather apps — the cold front had slowed down and the lead edge was now due in around 10AM.

As I got to the lake, the temperature drop which took place in the preceding 2 hours or so, thanks to clearing skies, allowed a thick fog to form on the lake (not good).  Additionally, the winds went calm (also not good).

Incredibly, Pam showed up with a Ford Explorer full of (mostly) dressed boys 3 minutes early.  I was impressed, as I know that was no small feat, especially given that the family spent the night in an RV.

I went over safety stuff, gear stuff, tactics, and then asked the Lord to grant us safety and success.

Our first 2.5 hours saw us land only 3 fish and miss three more, with no fish on the line for the youngest brother, Cade.  There were no fish showing on sonar, no birds working beyond a 20 minute span right at sunrise, and it was just tough, until…

At about 9:40, the lightest SW breeze began and the 100% grey cloud cover thinned just enough to brighten things up a tad.  I moved us to a breakline from a deep flat into the river channel and there, finally, on sonar was a bottom blanketed with white bass over a 50 yard span.  I literally exhaled a sigh of relief knowing that the boys were soon going to see their dream come true.

I deployed the Ulterra, marked the fish with my cursor on the H’bird Solix, and we Spot-Locked on the fish.  I issued out rods, being careful not to get tangled at this critical juncture, and emphatically reminded the boys not to drop their slabs until I let them know it was okay to do so (once the boat was fixed atop the fish).

I reminded the boys as they held their rods out directly in front themselves about the fundamentals of the technique we’d practiced.  We all let down our slabs to bottom at the same time and the magic started to happen.

The boys caught fish after fish — 45 in all — at this location right through 10:45 AM, during which time the wind developed from the west, then went slack, then began pushing lightly from the NW, then ramped up and shifted to NNW reaching a peak velocity of ~13 mph.  This was a short-lived, pre-frontal scenario and the boys were well-practiced by this point to take full advantage of the potential.

As the winds came full-on, the fish shut down, the boys got cold, and the fun factor started to fade; Pam and I knew it was a good time to call it a success and head for the dock.

The boys landed a total of 48 fish, including 46 white bass, 1 largemouth bass, and 1 drum.  Mission complete!

OBSERVATIONS:   The best concentrations of fish we found were immediately adjacent to the river channel once again today.  Temperature profile from surface to 55 feet deep was as follows:

Air Temp. @ Trip’s Start:  64F, then dropping as the cold front moved in 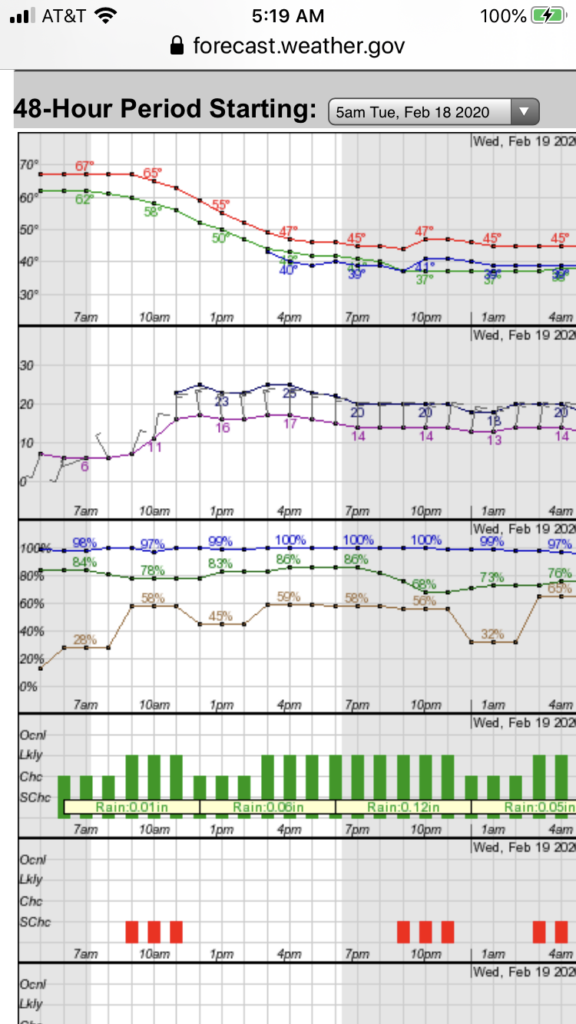 **Area SH0001C – channel drop which yielded nearly all of our fish