WHO I FISHED WITH: Today, Tuesday, Dec. 22nd, I fished with two separate parties.  This morning, I welcomed mother/daughter duo Pat Lehman and Chris Schwenke aboard at 8AM and fished with them until noon.  They landed 55 quality fish after our first 70 minutes’ worth of fog cleared.

My party this afternoon fished from 1:15 to 5:30P and desired not to have their names disclosed in any form of social media.  This granddaughter/grandfather pair landed 201 fish, a majority of which were small white bass.

Between noon and 1:15, I loaded and trailered my boat, wolfed down a Jaliso salad with grilled chicken at Sol de Jalisco in Morgan’s Point, and then re-launched in order to stay clear of the forecast afternoon winds. 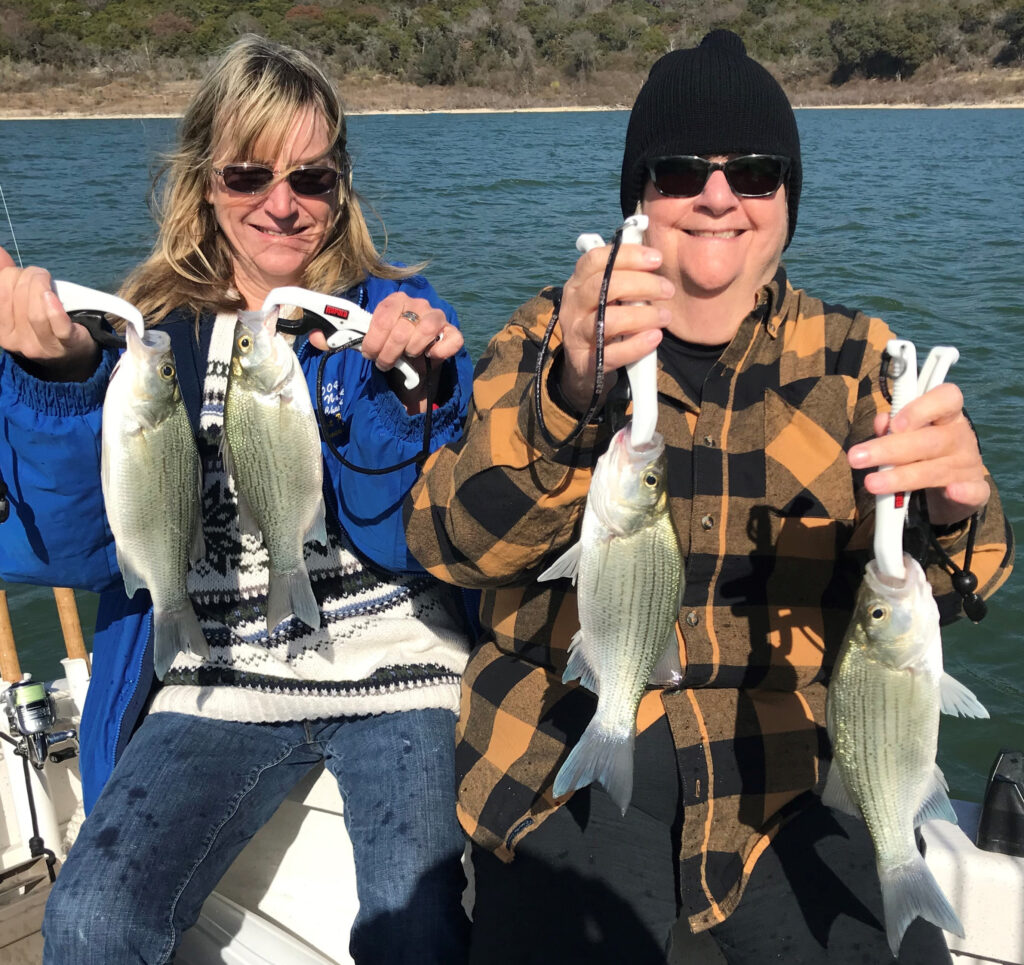 PHOTO CAPTION #1:  Pat Lehman and her daughter, Chris Schwenke, with a few of the 55 fish these ladies took on Lake Belton during the first 4 hours of morning light.  This was a personal best for both women in terms of number of fish landed during a single outing. 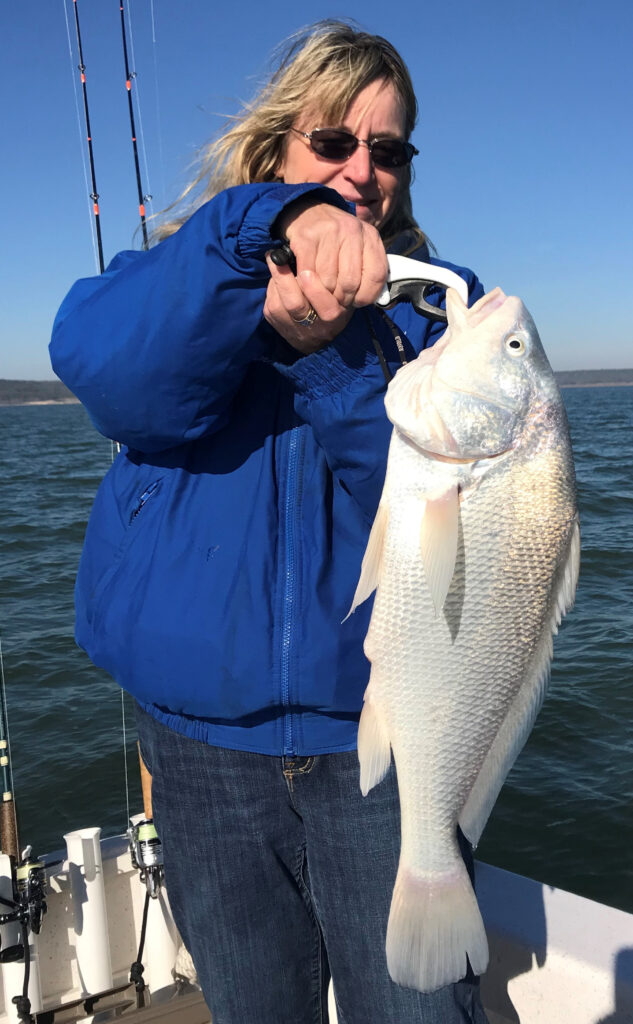 PHOTO CAPTION #2:   Chris wrestled this 5.75 pound drum into the net around 10AM.  As we work closer and closer to bottom for white bass, more and more drum and largemouth have begun showing up in our catch.

MORNING: This morning we were greeted with lake-specific fog which lasted about 70 minutes, during which time the bite stayed below average, giving up only 16 fish, with us having to seemingly pry each fish up off bottom to get bit.  As the fog cleared, the wind also rose to ~SSE11, and the bite loosened up.

We fished 4 areas this morning, each by working a 5/8 oz. Hazy Eye Slab with Stinger Hook vertically using an “easing” tactic.

There are areas that hold mainly quality, 12+ inch fish, and areas which hold smaller fish.  This morning we were able to get to those areas holding quality fish.  The fishing has been made tougher by the falling water temperatures, and the fish tend to come in spurts.  Once a single fish is fooled and is reeled in, others nearby get momentarily excited and are, for a short spell, more catchable.  Things then cool off and fire back up after another fish is landed, and so on.  Generally, suspended fish are a lot more prone to bite than bottom-huggers, but, the bottom-huggers make up the vast majority of fish we’re seeing on sonar.

AFTERNOON: This afternoon my location options were limited by the wind.  Winds peaked around 3p, blowing 17 straight-line, and gusting 23 from the SSE.  This was too rough to get to some of the open water areas holding solid fish, so, we opted for a lot of action provided by smaller white bass.

The approach was the same for my 12-year-old young lady and her grandpa:  find ’em with sonar, Spot-Lock on ’em, work 5/8 oz. lures vertically with an easing tactic near bottom, put ’em in the boat, and repeat.  The fish fed well this afternoon with wind, cloud cover, stable pressure, and a warming trend all working in our favor.  The fish bit well from start to finish, allowing us a take of exactly 201 fish, including 1 largemouth bass, 4 freshwater drum, and 196 white bass.

We caught so many fish they wore the eyes off of my Hazy Eye Slabs!!

OBSERVATIONS:  AM fish came in spurts; PM was non-stop bite.  No bird action.

Wind Speed & Direction AM: SSE under 4 during foggy conditions, rising steadily to SSE12 by trip’s end

Wind Speed & DirectionPM: SSE13 at trip’s start, peaking a SSE16 with higher gusts by 3P, then scaling back to SSE12 by sunset.

Sky Condition AM:  Lake level fog until 9:10, then clearing quickly to 20% white clouds on blue sky.

Sky Condition AM: 40-50% grey clouds on light blue sky with some haze. 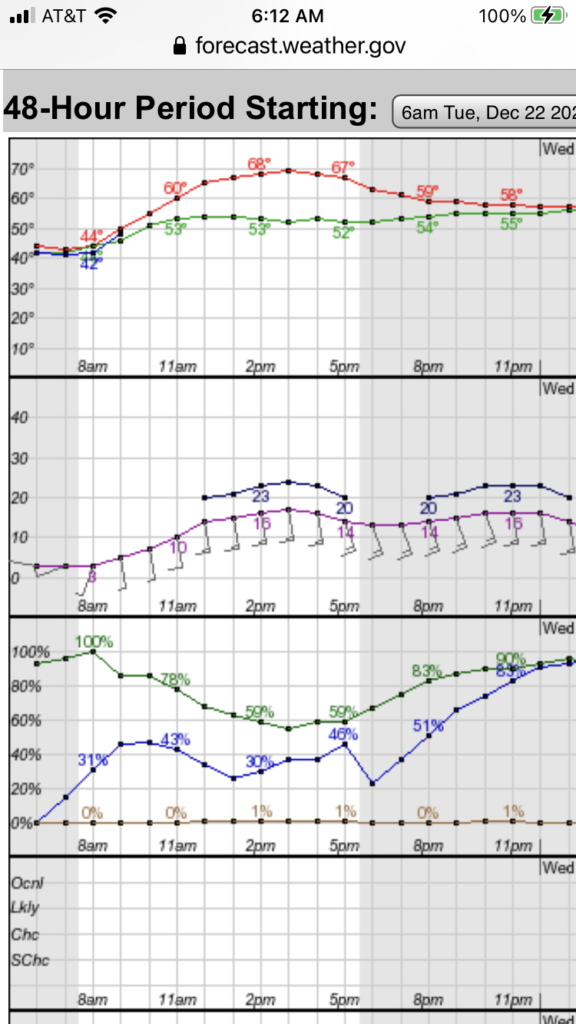