WHO I FISHED WITH:  This morning, Tuesday, 17 May 2022, I fished with a crew of four.  Back during the Christmas holiday, James Copeland’s daughter, Allix, got a fishing gift certificate for him from the family.  Today, “Pops”, as the grandkids call him, brought his son, JT, his son-in-law (Allix’s husband) Randle Jackson, and family friend Cody Stanley, out for a morning of catching on Lake Belton.

My next openings will be on July 7th and 12th.  Weekday mornings are always best.  Saturdays are available for on-the-water sonar training sessions (only) until after Labor Day when I’ll again offer Saturday morning fishing trips (until mid-March 2023). 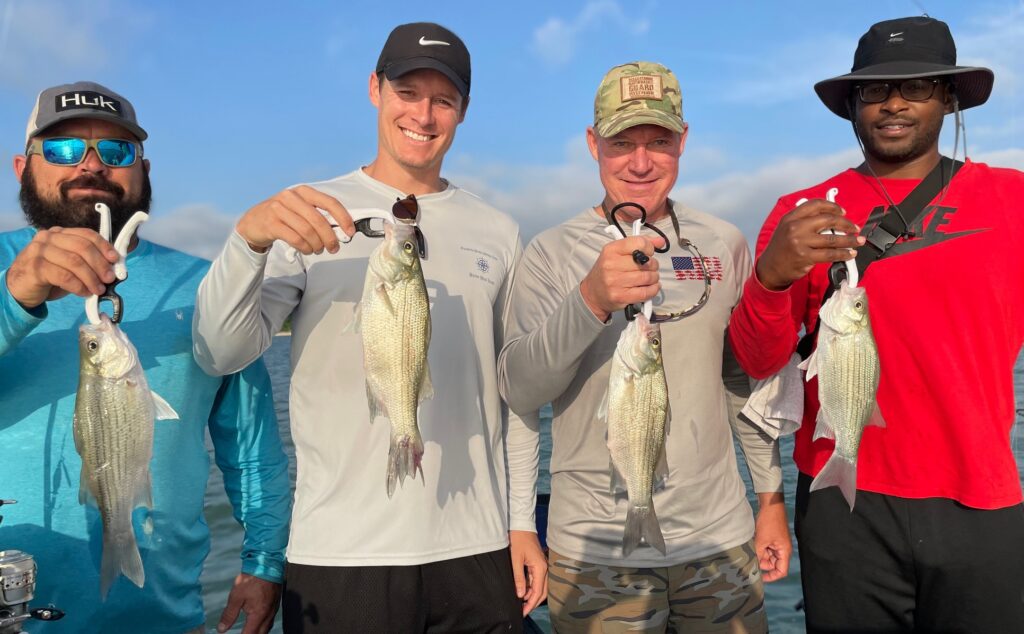 PHOTO CAPTION:  From left: Cody Stanley, JT and James Copeland, and Randle Jackson, each with a (spawned out) 14+ inch white bass we took from our first deep-water stop this morning.

There was really no shallow water/top water bite this morning, thanks to a slack wind.  I noted a lot fewer shad spawning without wind driving wave action onto the shoreline this morning.  I suspect the lack of shad directly corresponded with the lack of white bass up shallow.  With 4 men casting (well) for ~20 minutes, we only managed 2 strikes and one nice crappie landed on MAL Originals.  With that, we headed out deep and stayed there the remainder of the trip.

For you who follow these detailed accounts, I know this is going to sound like a broken record, but I’m a big believe in “if it ain’t broke, don’t fix it”.  The fishing was very straightforward, with the biggest challenge being to find the fish in the first place.  Once found, it was a pretty safe bet that they’d bite, given the weather and time of year.

We fished only three deep-water areas this morning; at the third, we “hopped” around a few yards one way and then the other to keep up with  the fish as the bite was waning, beginning around 10AM.

Other than that, we stayed Spot-Locked on the fish and all four fellows did a great job of effectively working their MAL Dense Lures vertically in conjunction with Garmin LiveScope to take fish after fish after fish.  We used only one tactic, and that was the “smoking” method which involves racing the lure upward from a dead stop on bottom so as to make it look like a panicked shad swimming fast and straight for its life.

One other thing the fellows did well at today was resisting the urge to set the hook.  Rather, they kept right on reeling after feeling a fish make contact with their MAL Lure.  This is a critical step some folks never get the hang of.  As fish pursue the MAL Lure, they push a pressure wave ahead of them (that’s like the “bulge” of water in front of a large, moving ship which you often see dolphins “riding”).  That pressure wave will interrupt the spin of the MAL Lure’s blade.  This interruption can be readily felt by the angler.  Most mistake this for a strike, but it is not.  The actual strike comes a split second later.  But, if an angler sets the hook on that first sensation caused by the interruption of the blade’s spin, either a complete miss can result, or, more likely, the fish will be hooked for all of 1 or 2 seconds and then get off because the hook was on the exterior of the mouth, but not inside the jaw so as to encircle bone or cartilage.

Our 182 fish catch included 175 white bass, 6 sub-legal hybrid striped bass, and 1crappie.   Of significance was the fact that, of the 175 white bass we landed, ~20 were under the 10-inch limit — this is a strong mature fish to juvenile fish ratio for Lake Belton.

OBSERVATIONS: Shad spawn was present, but weaker today.  This could be due to heat or due to a near calm wind scenario this morning.

Wind Speed & Direction:  Calm at trip’s start with light S wind starting around 7:15 and building to S10 by trip’s end

Sky Condition: A thin, grey bank of clouds existed in the eastern sky before and during sunrise, but quickly burnt off, leaving a light blue sky with ~30% white cloud cover the remainder of the morning. 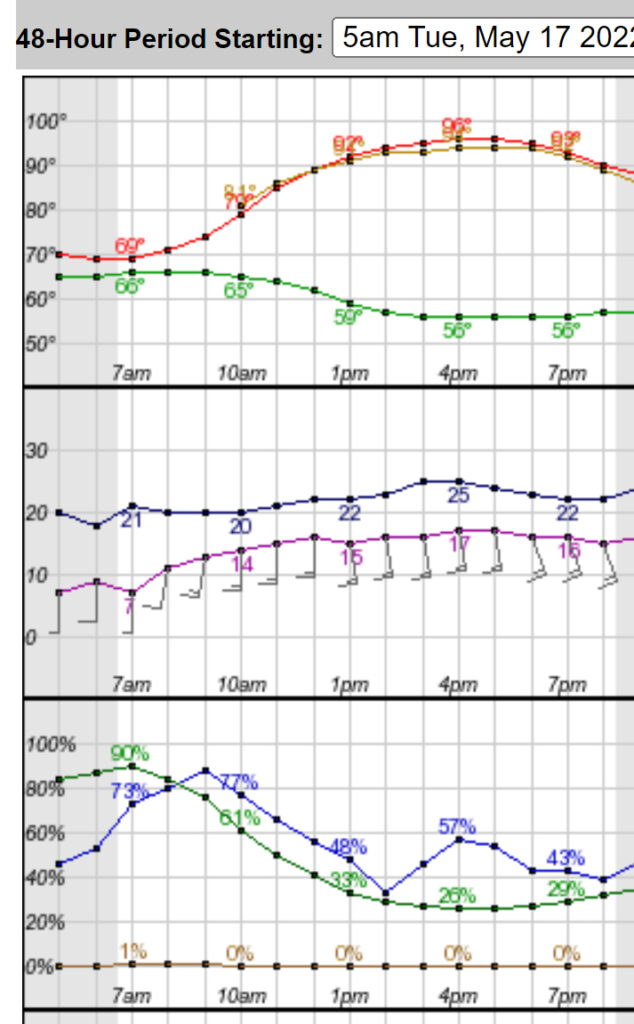