WHO I FISHED WITH:  This morning, Wednesday, July 20th, I fished with Morgan’s Point Resort resident Max Jordan and his grandkids, 18-year-old Dindy Brown, and 15-year-old Houston Brown.

With very stable, high-pressure weather firmly entrenched over Texas, I bet that the topwater would turn on once again today, and that turned out to be a good wager. 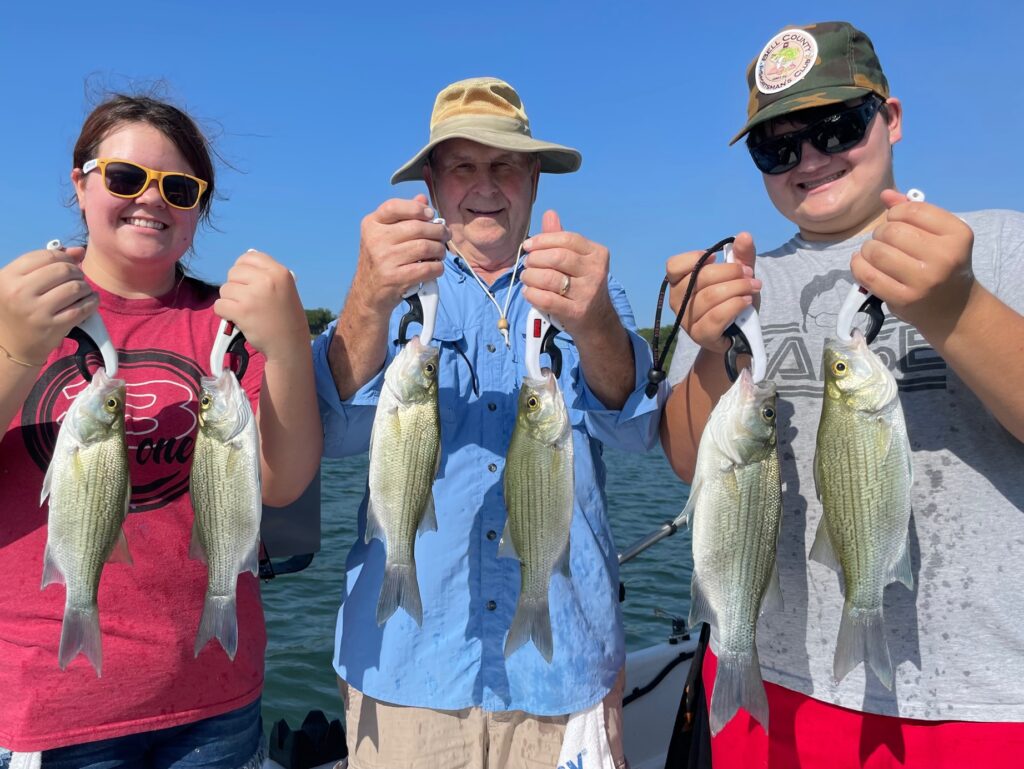 PHOTO CAPTION:  From left:  Dindy Brown, her grandfather, Max Jordan, and Houston Brown with a sampling of the white bass we took on topwater early, and with vertical and horizontal tactics later in the morning.  This crew boated 124 fish in just under 3 hours and then got off the water before it got truly hot. 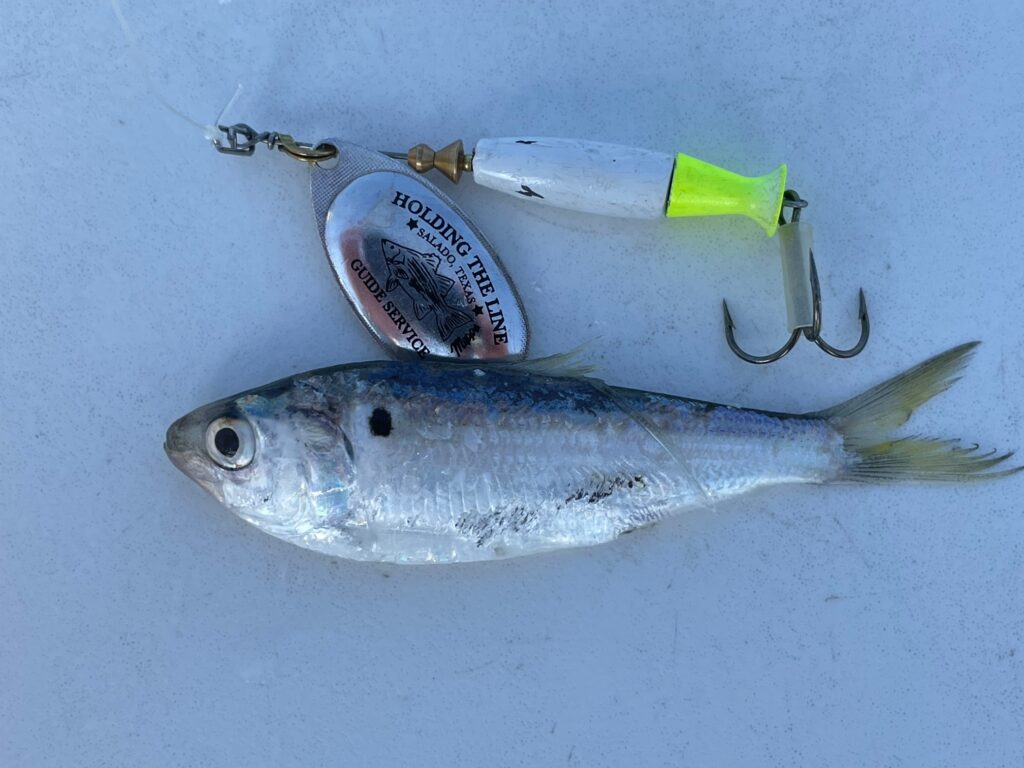 PHOTO CAPTION: When the bait was mature, like this threadfin shad which was regurgitated by one of the white bass we caught, the fishing was easier than when the white bass were keyed in on smaller, ~1.25″ young-of-the-year shad.  Note that “yellow tail” on both lure and shad  — not as brilliant as during the spawn, but present nonetheless.

The easy fishing, fueled by a strong topwater bite, continued on Lake Belton today.  Right at sunrise, smaller white bass began herding young-of-the-year shad to the surface and feeding on them aggressively.

These fish were a bit harder to fool than those we would find later in the morning, which we feeding on mature shad.  To overcome the challenge, I directed my crew to consider before each cast where the “center of mass” of the fish was located, lob a cast over top of that action, and bring the lure back through as many fish as possible.  In doing so, even if only 1 fish in 25 or 30 would fall for the bait (a modified MAL Original with 1 treble tine snipped off and the remaining 2 barbs mashed down), they’d still get bit nearly every time by bringing it through, literally, hundreds of fish.

We sighted our first school of fish at 6:47 AM.  By 7:55 AM, the majority of the topwater action was over, and Dindy and Houston had boated exactly 60 fish as their grandfather and I just sat back, unhooked fish, and encouraged the two of them.

After the fish left the surface, I did some downrigging in the same general vicinity, but the fish were uninterested.  I left this area, relocated, and, as I ran SI, DI, and 2D sonar searching for evidence, we were fortunate to happen upon a large group of bottom-oriented fish which would keep us in business until my crew called it quits early, at around 9:30 A.M.

Upon spotting these fish, I Spot-Locked atop of them, and, aided by Garmin LiveScope, we worked MAL Dense Lures (chartreuse tails) vertically using a smoking tactic.  We put exactly 42 additional fish in the boat in this manner with all three of my anglers now participating.

I encouraged Max to chip in on this, because the commotion caused by a third angler working his MAL and the catching and releasing of fish which resulted from his success would continue to keep the school we’d located fired up more so than with just 2 anglers working at it.

When the vertical action slowed, I gave some quick guidance on using the “sawtooth method”, and directed everyone to cast out to the port side (deeper side) of the boat where, over the time we’d been on Spot-Lock, I’d witnessed numerous schools of fish pass through.

Everyone did their part and we added another 20 fish to the count before Max suggested we wrap up a bit early as the Texas sun began to pour on the heat.

I suggested, since we never did get to witness a fish caught by downrigger earlier, and since Max had expressed interest in it, that we close out the trip with a brief round of downrigging.  We made two quick passes over the exact area we’d been fishing the MALs horizontally atop of, and took one fish on each pass.  The downrigger (I only ran one for this “demo”) was equipped with a 3-armed umbrella rig to which I’d attached Pet Spoons.

OTHER NOTES: 1) Unfortunately, the down-side of topwater action is the “boat show” that can quickly develop with folks cutting their nose off despite their face by motoring into or near the fish and/or chasing the fish with a trolling motor.  Be smart — get ahead of the fish and drift to them and through them.  2) Long casts help you avoid spooking the fish and keep the fish on top longer.

OBSERVATIONS:  This was the fourth solid episode of topwater I’ve observed under our current high-pressure weather.  The times and durations vary, but no topwater has gone beyond ~10:25AM.  Temperature profile was as follows: 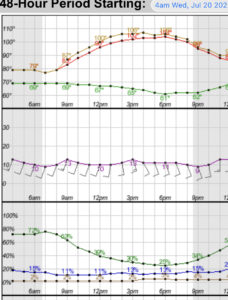