WHO I FISHED WITH: This past Tuesday morning, January 3rd, I conducted the first Soldiers’ Kids Involved in Fishing Fun (SKIFF) trip of the new 2023 season.

Accompanying me were four kids from two families, each currently impacted by the deployment of their fathers.  This would be the final day of Christmas break before the Killeen Independent School District went back in session.

From U.S. Army Sergeant John Diaz’s family I had 10-year-old Violet and 13-year-old Alexander join me.  SGT Diaz has been in the military for 11 years and serves as a wheeled vehicle mechanic.

From U.S. Army Staff Sergeant Matthew Peet’s family I had 8-year-old Rowan and 12-year-old Jack join me. SSG Peet has been in the military for 13 years and serves in the field artillery.

The homefront parents, Jonelle Diaz and Theresa Peet, are back here in the Fort Hood area essentially managing as single parents while their husbands are deployed.

ABOUT SKIFF:  S.K.I.F.F. stands for Soldiers’ Kids Involved in Fishing Fun.  SKIFF fishing trips are provided at no charge.    This program began in May of 2009, and is funded by the donations and fundraising efforts of the Austin Fly Fishers and other organizations they have partnered with.  S.K.I.F.F. provides the children of military personnel separated from their families due to duty commitments with the opportunity to go fishing.  SKIFF trips are also provided, free of charge, to Gold Star families who have lost their service member while he or she was on active duty.  In mid-2019, SKIFF also began providing trips to dependents whose parents are bona fide disabled veterans.  I coordinate and conduct these ~3.5-hour  adventures on Belton Lake and Stillhouse Hollow Reservoir, just outside the gates of Fort Hood in Bell County, TX, year ’round.  Call or text 254.368.7411. 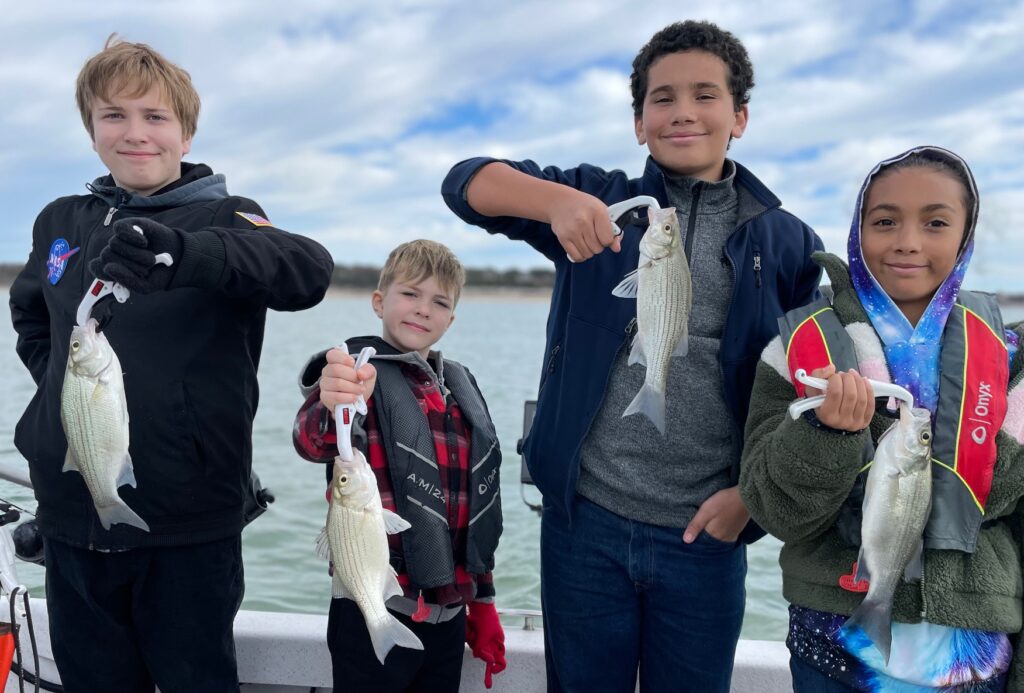 PHOTO CAPTION: While their fathers are deployed, the Peet kids and the Diaz kids got to enjoy a fishing trip provided free of charge via the Soldiers’ Kids Involved in Fishing Fun (SKIFF) program.  From left: Jack & Rowan Peet, and Alexander and Violet Diaz. 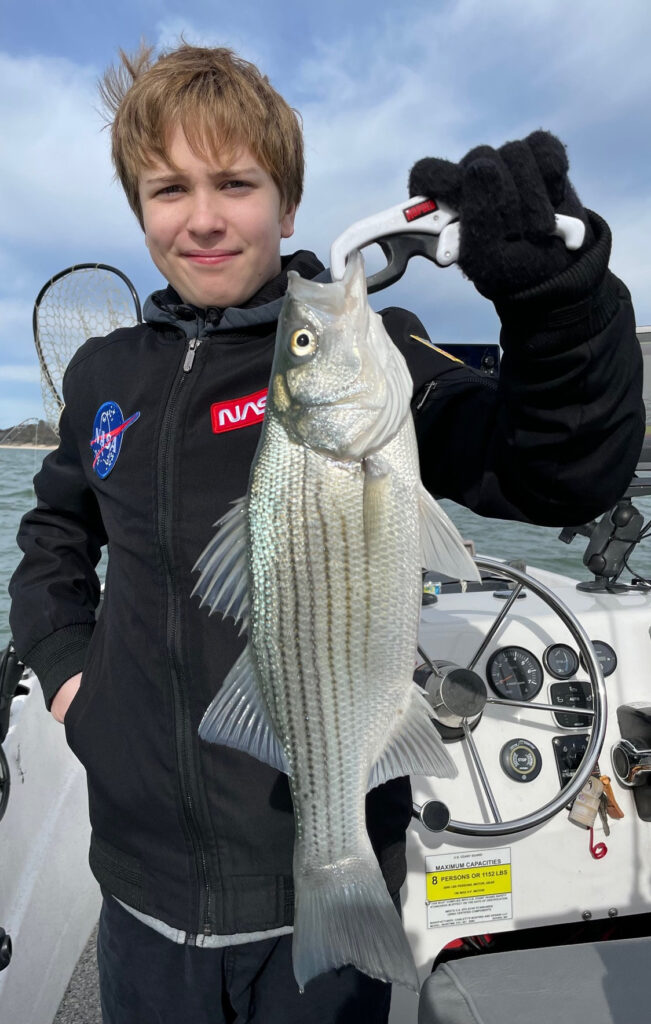 Bottom line: This was a challenge.

I had four young, inexperienced anglers I truly wanted to do well, and at a time of year when (due to cold water and inconsistent weather patterns) the fishing is typically neither consistent nor overly productive.

My approach was to keep it very simple so far as the kids’ part was concerned, and do my darnedest to find abundant quantities of fish.  Whenever white bass are found grouped together in great numbers, even if they are not very “hungry”, the sheer numbers of fish present can generate competition.  A given fish may not be proactively feeding, but, I do feel it will swat at a bait just to keep another fish from grabbing it first.  This was the kind of bite I needed to get the kids into, and, it worked out!

Violet was our first lucky contestant.  Once she hooked and landed a fish, the three boys got competitive and started listening (that is, listening as well as Violet did right off the bat!!!) to what I was telling them they needed to do to be successful.  Violet’s first bit of success also “broke the ice” and showed everyone else that this thing called catching fish could really be done.

For 3.5 hours the kids worked white, 3/8 oz. Bladed Hazy Eye Slabs with stinger hooks vertically using a slow-smoking tactic while watching Garmin LiveScope.  They amassed a catch of 51 fish during this time, including 1 legal hybrid striper, 1 short hybrid striper, 2 freshwater drum, 1 largemouth bass, and 46 white bass, of which 3 were short.

We fished only three areas, and, counter to the recent trend I’ve experienced involving a near total lack of bird activity, birds (both gulls and terns) actually led the way to our final stop of the morning.  This activity was light and brief and only involved perhaps 15 birds, but, it was enough to get me to the right area where I could then rely on sonar to take care of the rest.

I felt very satisfied when I overheard the discussions going on as the kids ran up the concrete boat ramp to meet their moms when Jonelle and Theresa returned to pick them up.  Those discussions centered around, “When can we go again?!?”.

OBSERVATIONS: After 7 consecutive trips without helpful bird activity, we had just a brief episode this morning which took place around 10:15A involving a mixture of ~15 gulls and terns — just enough to get us close enough to allow sonar to do the rest.

Wind Speed & Direction:  W3 at sunrise, increasing to W7-8 by 9A, and maintaining thru trip’s end 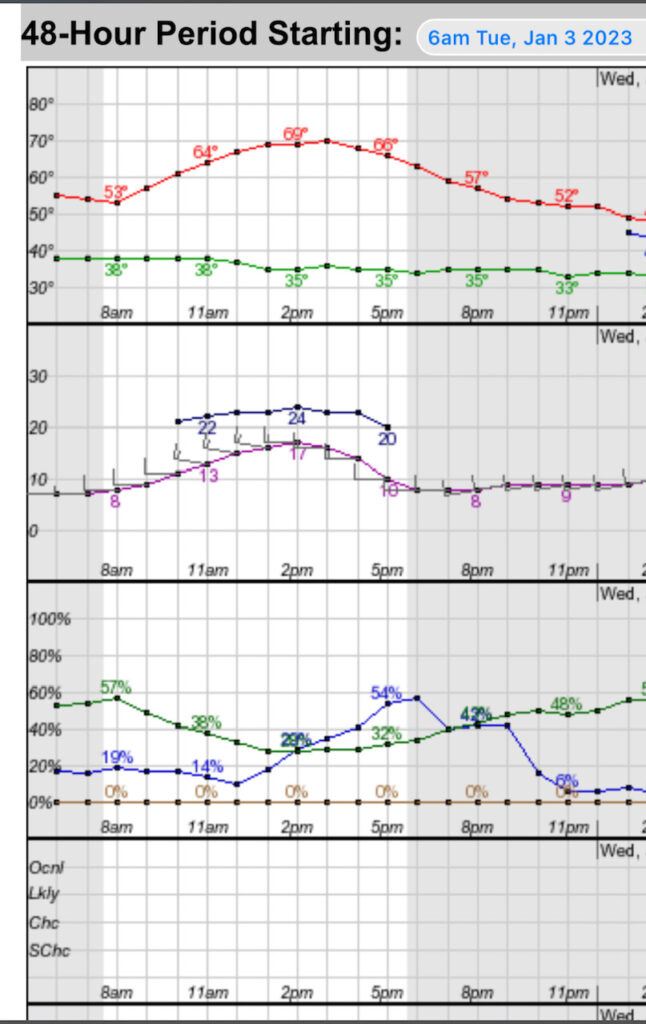