WHO I FISHED WITH:  This morning, Friday, July 22nd, I fished with two of Tom Bohmfalk’s grandchildren, Abigail and Josiah Bohmfalk, as Tom capably served as “first mate” helping me help the kids be successful on this “Kids Fish, Too!” package trip.

Such trips are both shorter in duration and more economically priced than my standard 4+ hour adult trips. 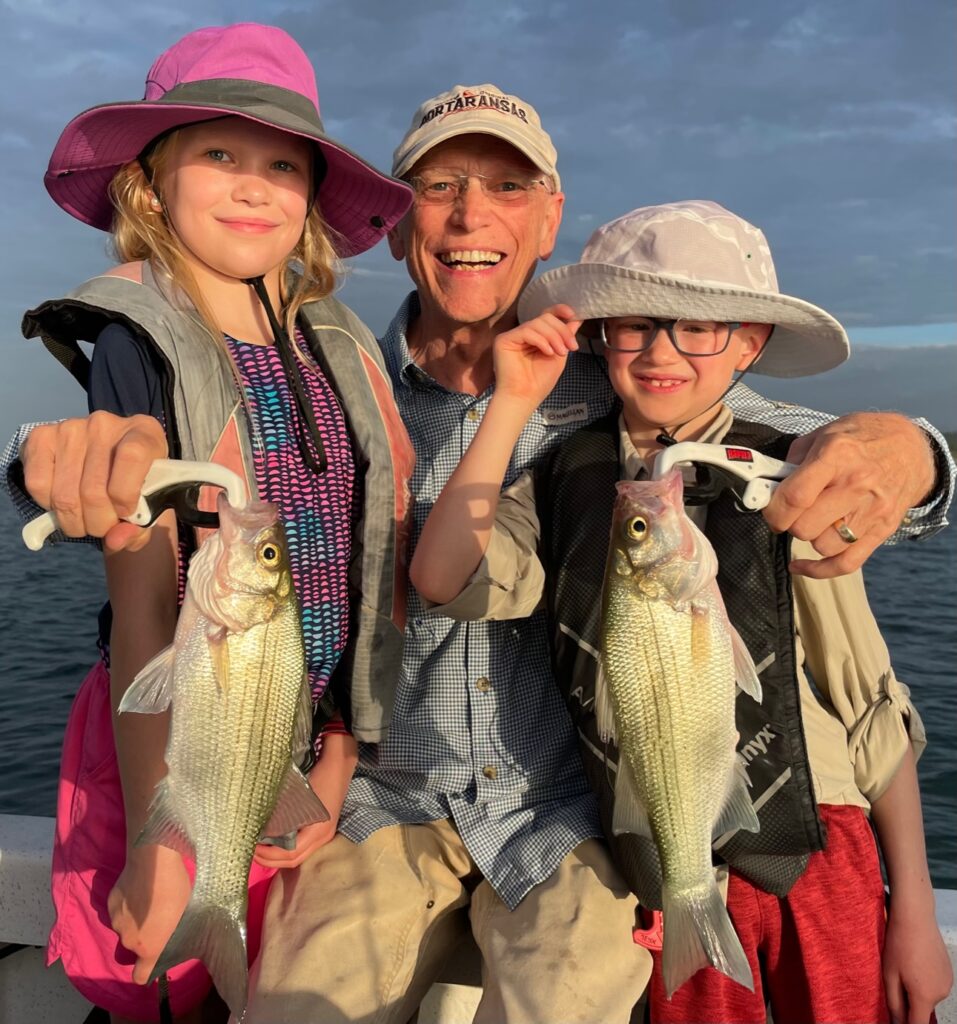 PHOTO CAPTION:  From left: Abigail, “Poppy” Tom, and Josiah Bohmfalk with a pair of white bass the kids landed simultaneously early on in our trip using MAL Dense Lures to get to bottom quickly in deep water. 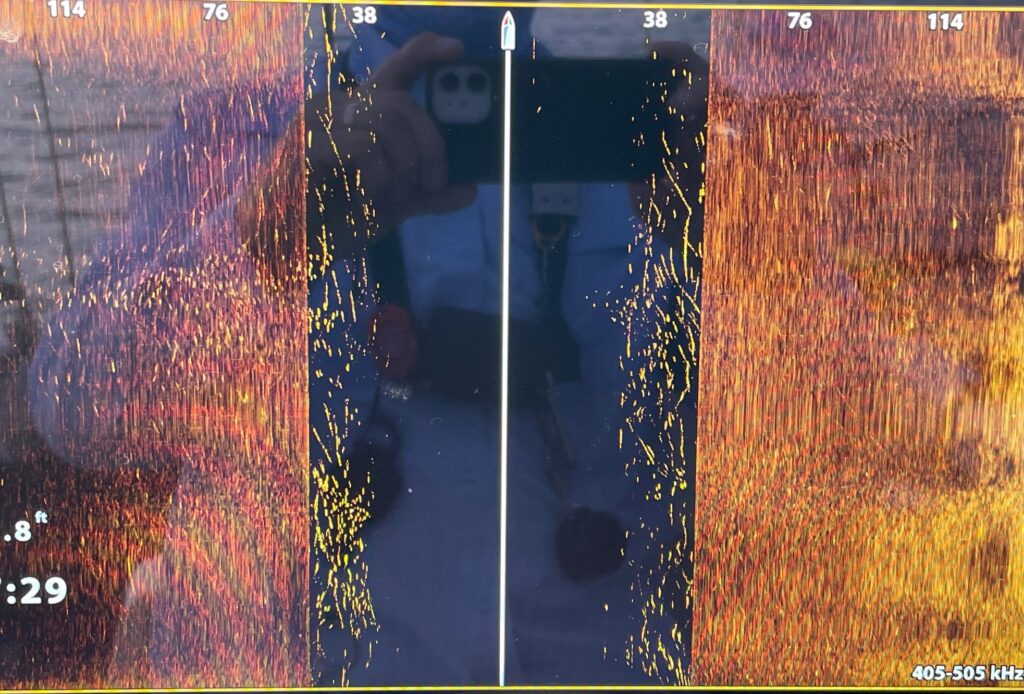 PHOTO CAPTION: A sonar sight to behold when you are trying to put 7 and 8 year old kids on fish and hold their attention!!  Thank you, Lord! 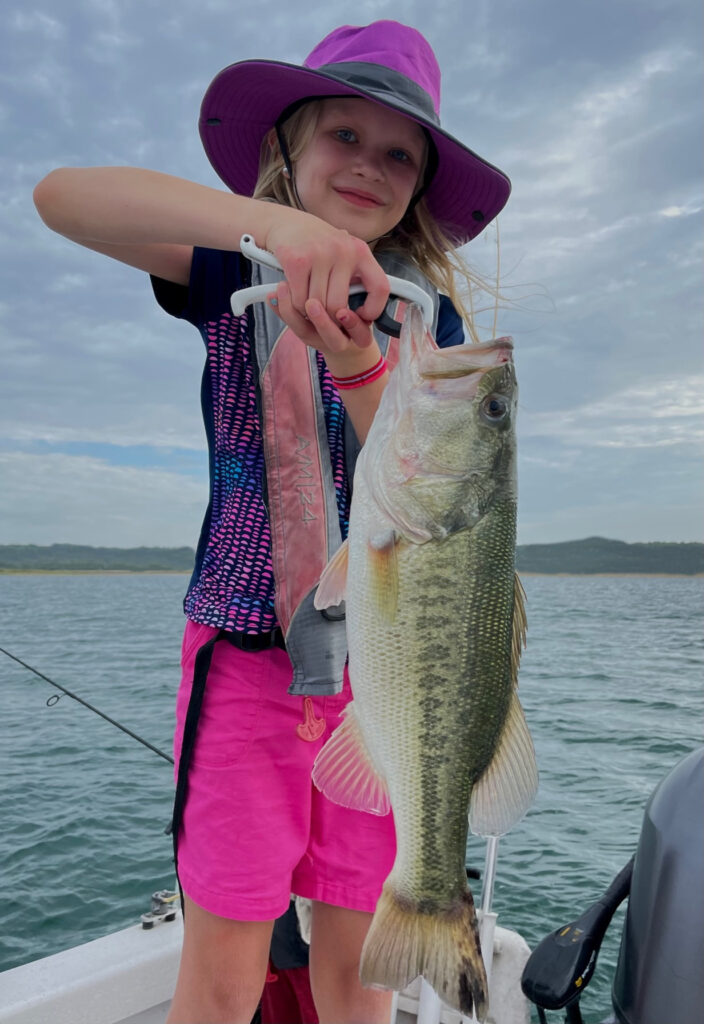 PHOTO CAPTION: Abigail landed this 4.50-pound largemouth from out of 57 feet of water.  It chased after an MAL Dense Lure and was mixed in with a large school of white bass.

Both Lake Belton and Stillhouse Hollow are fishing well right now with stable weather setting the stage for much consistency in the fishery.  I chose Stillhouse for this morning’s trip because I knew I could help the kids do well without requiring them to do a lot of casting, given their young age and lack of prior experience with spinning tackle.

We fished only three locations this morning and boated a total of 80 fish.

Our first stop came in 57 feet of water and produced 45 of our 80 fish.  This area also produced longer than any of the other areas.  We stayed in a single Spot-Lock position and worked MAL Dense Lures vertically while the kids watched their presentations and fish response to those presentations on Garmin LiveScope.

After this played out, we found a subtle, underwater depression which held a lot of smaller schools of white bass, each with perhaps 25-40 fish, as seen on side imaging.  Since the kids’ wrists were just about shot at this point from fighting fish, we downrigged for these fish with twin ‘riggers, each equipped with Pet Spoons running behind 3-armed umbrella rigs.  We took another 30 fish from this location before the bite went soft around 9:45.

We hit one last location and fished it in the same manner as our first stop of the day.  The fish were really gearing down at this point in time.  We took a final 5 fish in our final 35 minutes on the water, and then called it a day.

Our tally was 80 fish, including 76 white bass and 4 largemouth bass; no sub-legal fish of either species was landed.

OBSERVATIONS:  Thanks to a cooling layer of cloud cover and winds which picked up to 13 mph by mid-morning, the topwater action which has been taking place reliably through around 10A was diminished this morning.

Sky Condition: A solid, thin grey cloud mass stayed with us until ~9A, then began to break up.  By trip’s end, we had 40% broken white cloud cover on a bright sky. 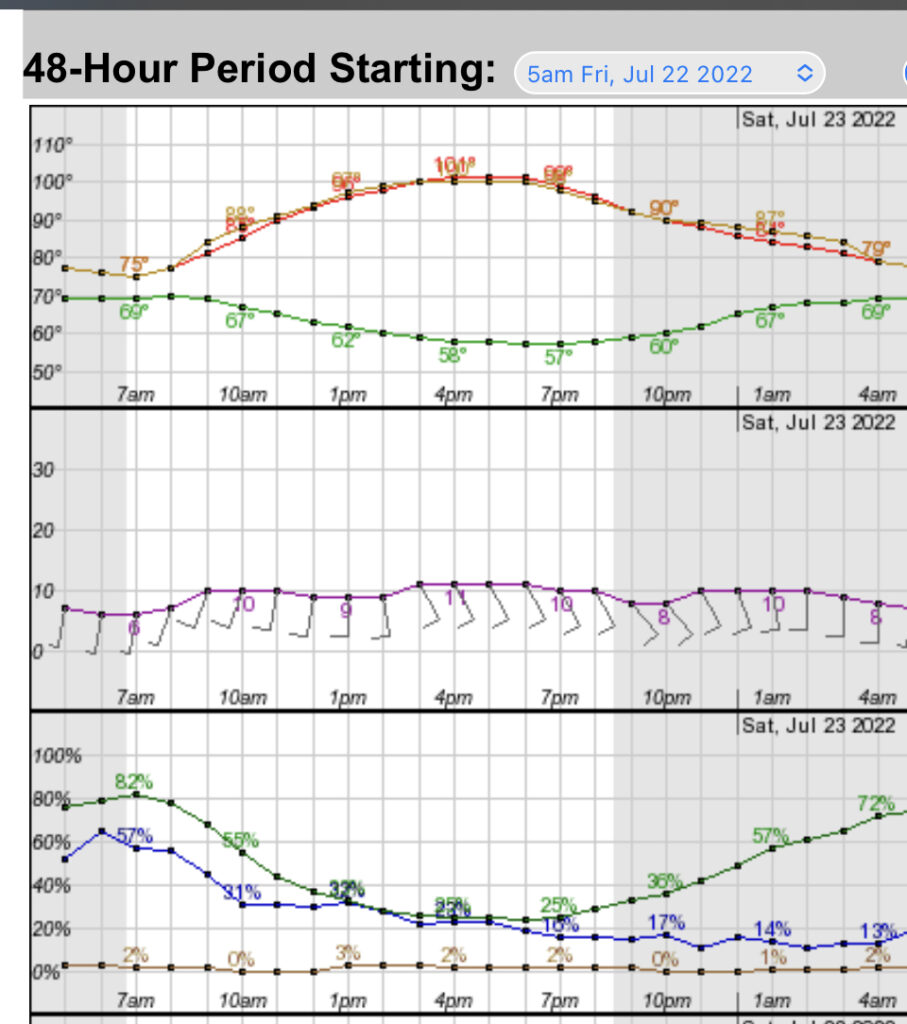