WHO I FISHED WITH:  On Thursday, 02 June 2022, I fished with first-time guests Cedric, Terry, and Daniel Day.

Cedric, who serves as the medical director for the faith-based Hope Pregnancy Centers in Central Texas, and I first met at a recent fund-raiser for that organization.

Cedric had considered fishing with his son earlier in the year, but I suggested holding off until the peak mid-April to late-May/early-June timeframe to ensure success. 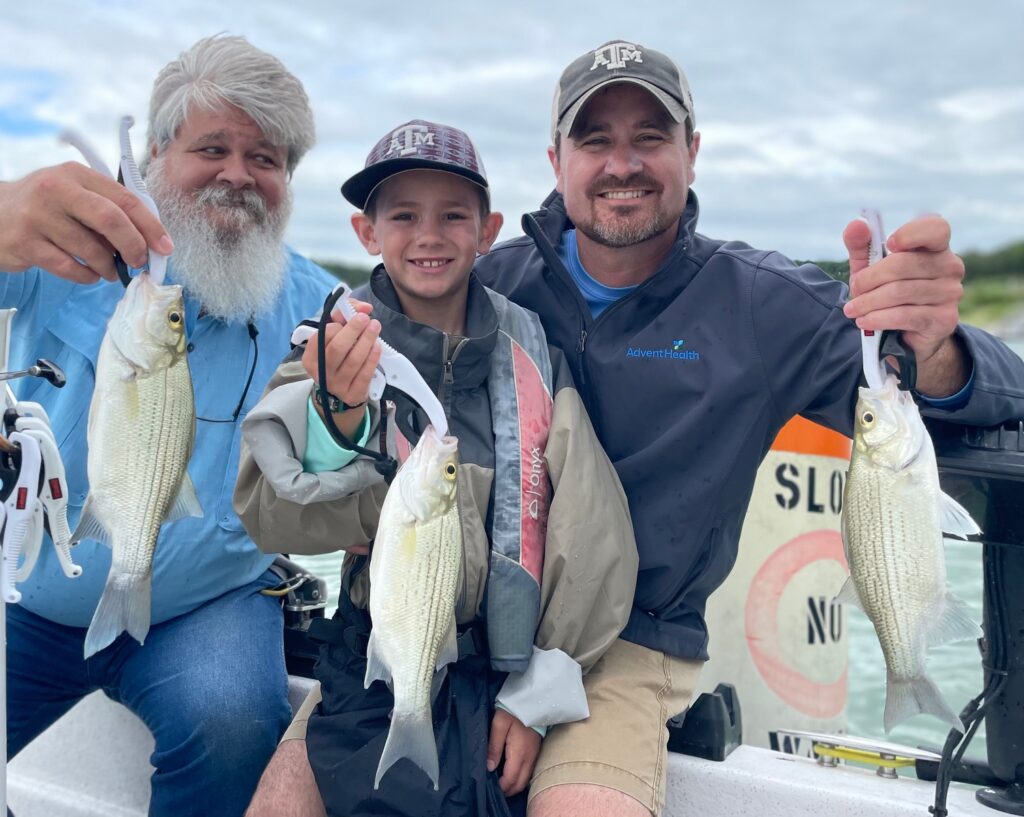 PHOTO CAPTION:  From left: Terry (Papa Bear), Daniel (age 9) and Cedric Day with a few of the 86 fish they landed as an early summer cold front surprised us and the weathermen. 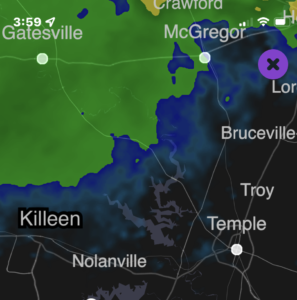 PHOTO CAPTION: After an hour of fishing, that “green monster” bore down on us around 8:00A, but, by 8:30, had moved quickly to the SE.  We got in another hour of fishing, before another, more violent, wave of weather moved in forcing an early conclusion to our trip.

I know I’m preaching to the choir when I lament how erroneous weather forecasting can throw anglers a real curve-ball, but, today was a real doozy.  We were due to have winds from the SW at 7-12 during our first 4 hours of light today, but, in reality, were faced with northerly winds all morning, the passage of two bands of rain, and winds which went 15-18, gusting 22+.

We got going at 6:30A, found a few fish chasing shad on topwater, but the ill effects of the north wind were already beginning.  The wind speed was up, thus disturbing the surface, which cuts down on fishes’ ability to silhouette prey against the bright surface.  After catching a handful of fish, we moved on to look for congregated fish in deeper water to work vertically for.

We found such a school in about 26 feet of water, caught another 9 fish from that bunch and, perhaps more importantly, got all the kinks worked out of everyone’s technique.

We caught those nine fish with a wind driving drops of rain from the north at high velocity so, when the bite died, we made a call to get everyone back to cover to await the passage of this band of weather which appeared on weather radar to be moving quickly.  I was now about 8A.

We reboarded the boat at 8:20A and drove straight to a nice, bottom-hugging school of fish in just over 40 feet of water. We picked up another 23 fish here working MAL Heavy Barbless Lures (for the men) and an MAL Dense (for Daniel).

When that group of fish lost interest, I found another nearby.  This school was NOT bottom-oriented.  Rather, it consisted of a loose gathering of suspended fish which, by the commotion we created as we fished for them, we were able to get to consolidate under the boat.  We continued our “smoking” tactics, but, instead of cranking x number of times up off bottom as we did for the bottom-oriented fish, we cranked until our lures were 2-3 handle turns above the highest of the suspended fish.

We took a final 51 fish at this location and then got while the gettin’ was good as yet another storm pushed in from the NW, this time with ample thunder and lightning.

I got my three men to their vehicle before the first raindrops fell, then sat in my truck in a downpour between getting my boat on the trailer and trailering home.  As I sat in the truck, glad we didn’t wait a minute longer to come in, I watched the temperature drop from 74F to 66F in a matter of minutes.

OBSERVATIONS:  1) White bass are definitely turning on to young of the year threadfin now. 2) In addition to bottom-hugging fish, loosely grouped fish in the lower third of the water column were consistently found on the windward side of deeper, steeper bottom features.

Wind Speed & Direction:  Light/variable winds at trip’s start under 2mph, then picking up from the SE at under 8 mph from ~8A on.

Sky Condition: Grey skies all morning with rain and wind gusts under influence of an incoming cold front.

Wx SNAPSHOT: (This turned out to be quite inaccurate!) 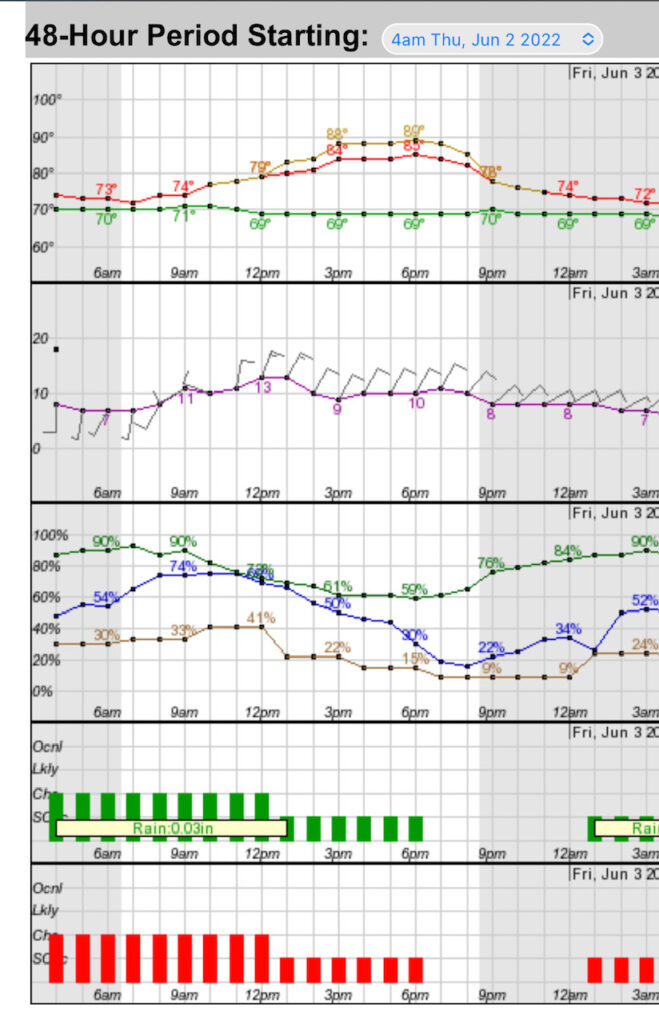