WHO I FISHED WITH:  This morning, Thursday, June 16th, I welcomed aboard 9-year-old Miss Adi Zwern of Houston.

Adi is in the midst of her annual summer visit with her Grandma and Pop Pop in Georgetown.  For the last three years now, fishing with me has been a part of that summer visit.

Adi was accompanied by Pop Pop Larry Brewer and Uncle Blake Hoekstra on this “Kids Fish, Too!” trip — a trip intended just for kids, which is less expensive and shorter in duration than my adult trips.

In addition to the fishing, games and craft projects are also a traditional part of Adi’s summer visit.

This year, the domino game “Train” was the big hit, and painting birdhouses was the craft du jour.  It seemed Adi took particular delight in causing “train wrecks” for her Pop Pop, thus causing him undesirably high scores (like 87 … 87 … 87… 87 … 87)!!

My next openings will be on July 12th and 13th.  Weekday mornings are always best.  Saturdays are available for on-the-water sonar training sessions (only) until after Labor Day when I’ll again offer Saturday morning fishing trips (until mid-March 2023). 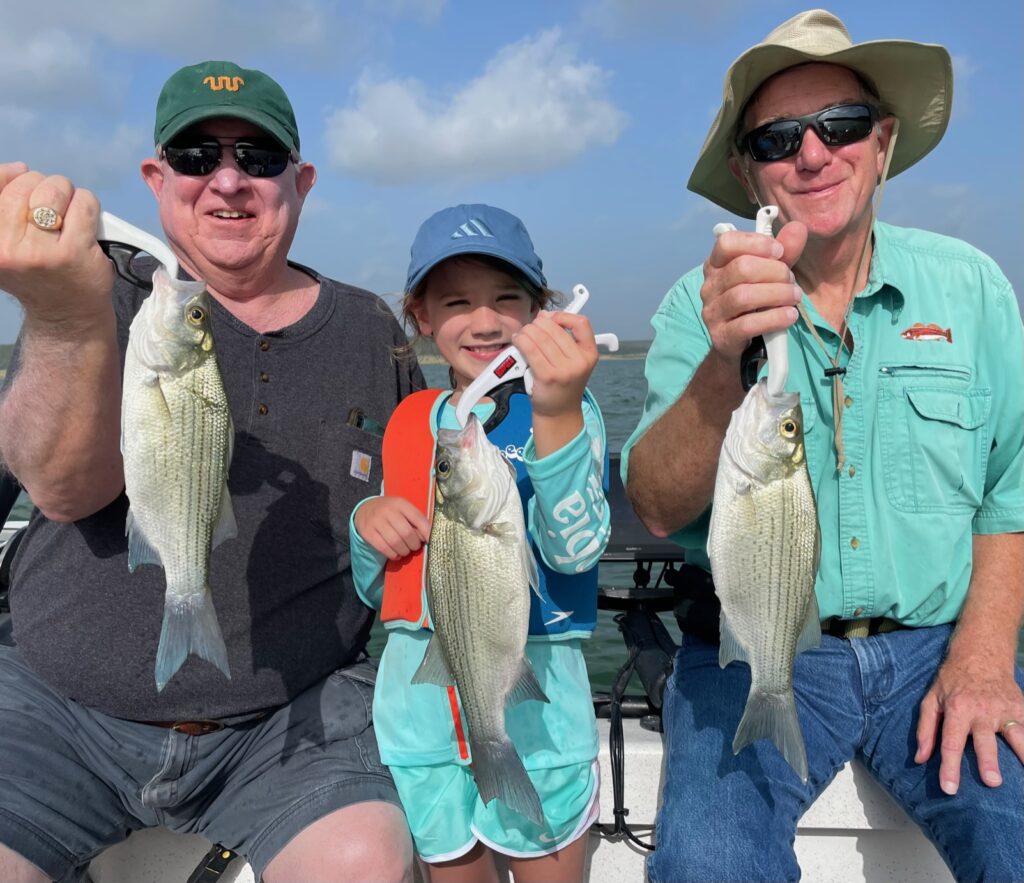 PHOTO CAPTION: From left: Pop Pop Larry Brewer, Adi Zwern, and Blake Hoekstra, each with one of the larger white bass we took mid-morning from deeper water after topwater feeding by smaller fish died down. 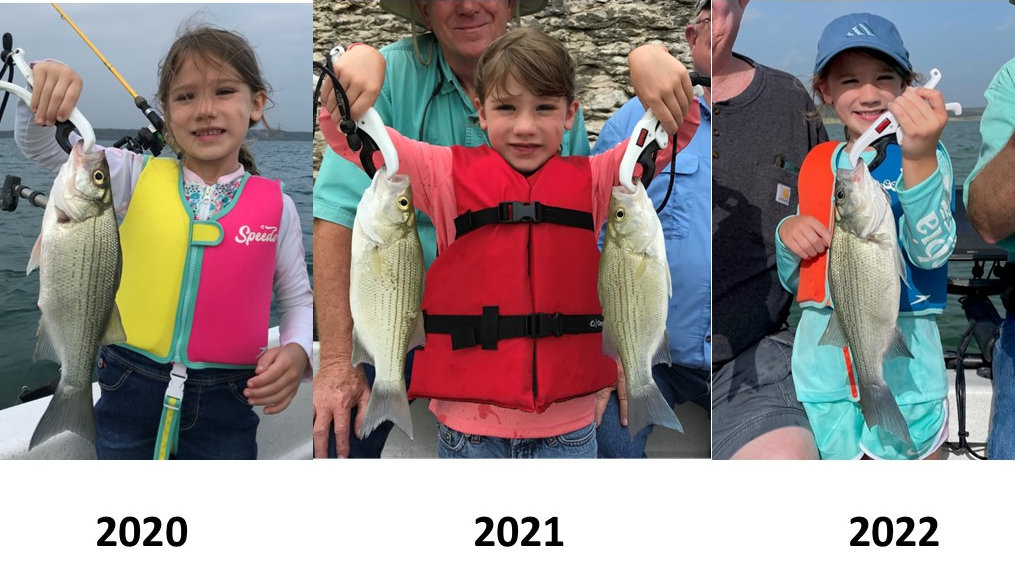 PHOTO CAPTION: A few pieces of Adi’s summers spent with Grandma and Pop Pop through the years.

There is a very definite transition to summertime fishing patterns now underway at Lake Belton, as was the case over at Stillhouse Hollow earlier this week.

This morning on Belton, lots of small, young-of-the-year shad made easy pickings for white bass under low light conditions right at sunrise.  We sight-cast to fish in schools of perhaps 100-200 fish each all tightly bunched together as they worked together to pin bait up against the surface.

We threw MAL Original Lures with white tails to these eager feeders and caught a fish each time Adi could reel the lure fast enough to keep it from sinking below the fish.

After the sun rose above the clouds and started brightening things up, we continued catching these same fish which were now visible only on sonar down between 12-18 feet.  I ran just one downrigger with a 3-armed umbrella rig equipped with silver Pet Spoons to catch these fish until they finally pushed deeper in the water column and away from shore.  By this time we’d landed 16 fish, including a double on the umbrella rig.

From this point and until about 9:15, we went out into deeper, 38-44′ water searching for more bottom-oriented schools of fish.  We found two such groups of fish, drew them in toward the boat with the commotion we created, and caught them on MAL Heavy Lures (silver blade/white tail) steadily, greatly aided by Garmin LiveScope.

The sole tactic we relied upon in this deepwater fishery was “smoking” MAL Heavy Lures  up off the bottom repeatedly.

We picked up 32 fish at our first deepwater area, and another 19 fish at our second.  By the time our fish count approached 45, Adi’s little wrists were starting to give out.  I’d already swapped her spinning reel handle from left to right and back again multiple times to give her arms a break, but, at fish #67, she said she didn’t think she could reel in any more.

With about an hour still remaining, we took photos, did a bathroom break, and I then re-tooled to pursue sunfish up in shallow water.  This was a much less strenuous exercise and Adi, who’d sunfished with me previously, did wonderfully well at watching her float and setting the hook.

In about a half-hour, Adi put 24 sunfish in the boat, including redears and bluegills, thus bringing our final fish count to 91.

Adi reeled in every last one of those 91 fish all by herself!

OBSERVATIONS:  The fairly light winds and thin, but complete, grey cloud cover this morning made for great topwater conditions, with fish feeding for an extended period of time versus a bright, cloudless and/or windy morning.