WHO I FISHED WITH:  This morning, Wednesday, June 29th, I welcomed aboard U.S. Army veteran and retiree Robert Rhodes of Killeen, TX.

Robert, like many anglers, has a boat which is well-equipped with sonar, a trolling motor, and quality batteries to keep everything powered up, but he knew he just was not using this equipment to its full potential when it came to finding and catching fish.

We made some inroads today toward that goal of consistently finding and catching fish after Robert booked both a fishing trip, followed by an on-the-water sonar training session with me.

My next openings will be on 1, 10, & 11 August.  Weekday mornings are always best.  Saturdays are available for on-the-water sonar training sessions (only) until after Labor Day when I’ll again offer Saturday morning fishing trips (until mid-March 2023). 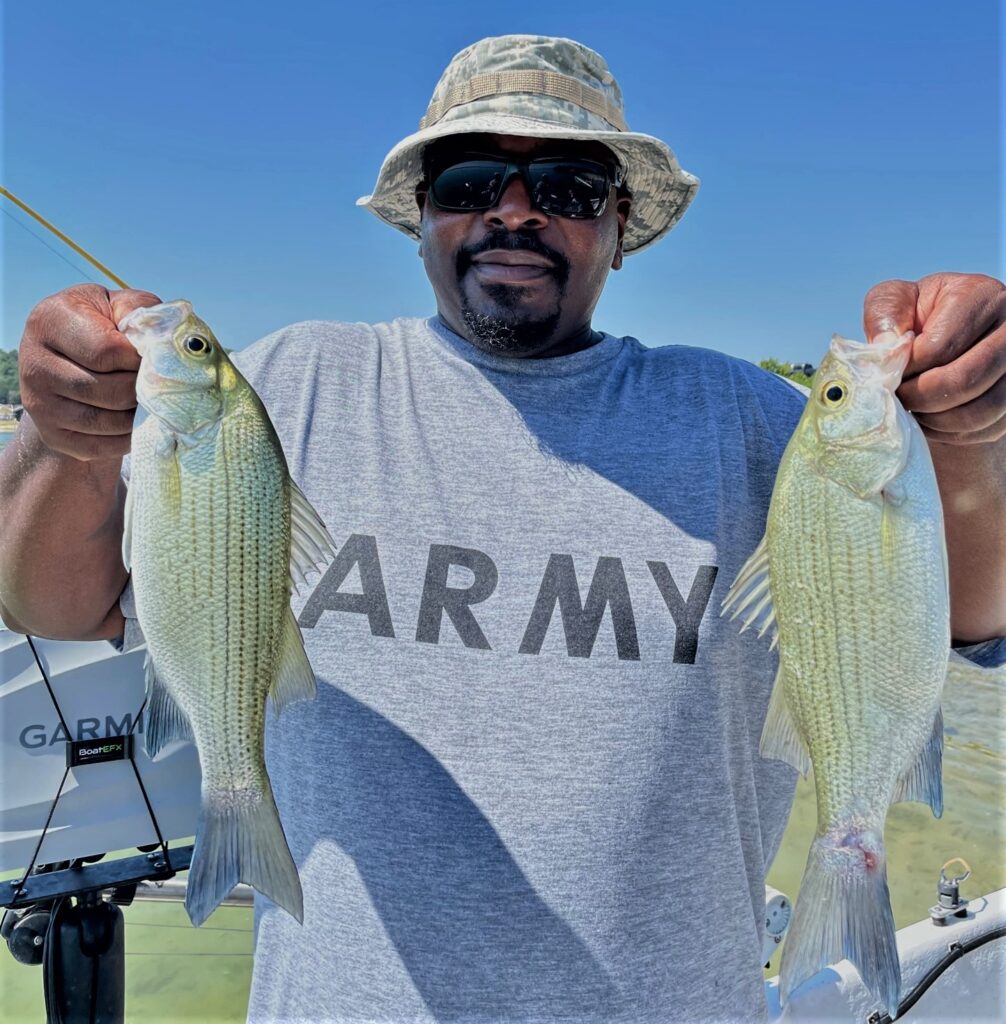 PHOTO CAPTION: With clear skies and light winds following Monday’s cold front, we really had to work for what we caught today.  By the end of the trip, Robert got great exposure to downrigging, sonar use, the smoking tactic, and the sawtooth tactic. 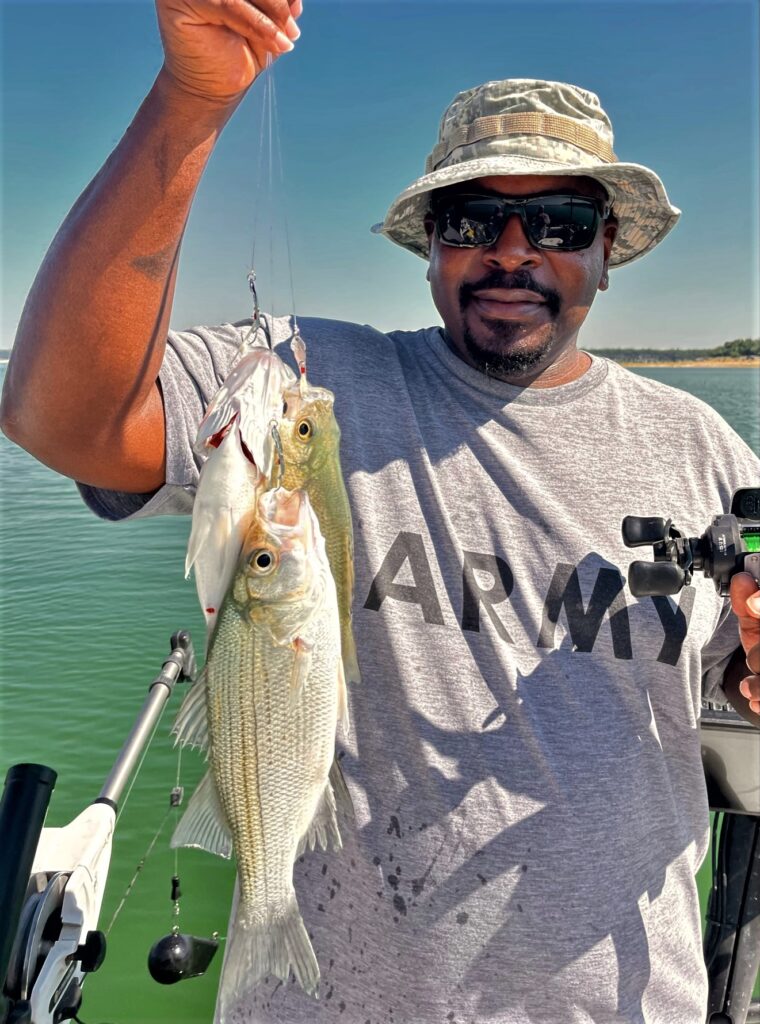 PHOTO CAPTION:  For the sixth consecutive trip we managed a “triple” — catching three fish at a time, one on each of the three Pet Spoons on my 3-armed umbrella rig fished behind a downrigger.  This was our one and only triple today under calmer, brighter conditions.

We came as close to “post-frontal” tough as we could today without the winds actually going calm.  Despite a forecast to the contrary, we endured bright skies and near-calm, puffing winds all morning. The fish really didn’t put on the feed bag at any point this morning, but, the latter half of the trip was definitely more productive than the first half.

The downriggers really earned their keep this morning.  When the bite gets tough, the downriggers allow for covering a lot of territory very quickly.  Many folks mistakenly think of downrigging as an expensive, highly-technical form of trolling, but it is much more than that.

By precisely controlling the depth of your presentation (and verifying it on sonar), lures can be run in and around many times more fish than could be presented to with a vertical or horizontal presentation over the same amount of time from a fixed position.  Further, at a time when fish begin to organize horizontally (parallel to the bottom) due to thermal stratification, the downrigger keeps your baits right in the “zone” better than any other method.  The Hell-Pet, Jet Divers, Dipseys, and trolled crankbaits just can’t match the downrigger’s accuracy and allowance for tight turns.

When fish are turned off, a downrigger can help expose that low percentage of fish willing to chase and eat to your lures while the vast (disinterested) majority of the fish just watch that bait go on by.  You are able to weed out the aggressive fish from amongst the passive fish.

We used the downriggers to find and catch fish, and, on the occasions where the caught fish came from an area with an abundance of other fish present, we stopped and worked MAL Dense Lures more thoroughly over those areas with a horizontal “sawtooth” method, guided by side-imaging which showed us which direction to cast, and how far out away from the boat the fish were.

We caught roughly 3 fish on downriggers for every 1 we took on the MAL Lures today because the fish were very spread out and pretty disinterested all morning.  We took two fish on the MAL Original (the lightest version of the MAL) when the burst up on the surface chasing after shad, literally, for just seconds.  I rigged up our downriggers with unweighted 3-armed umbrella rigs equipped with Pet Spoons.

Wind Speed & Direction:  Puffing 0-3 from ENE for the entire morning.

Wx SNAPSHOT: Unfortunately, this wx forecast missed the mark.  We never had winds above ~4 mph, with multiple spans of calm; and, we never had any cloud cover. 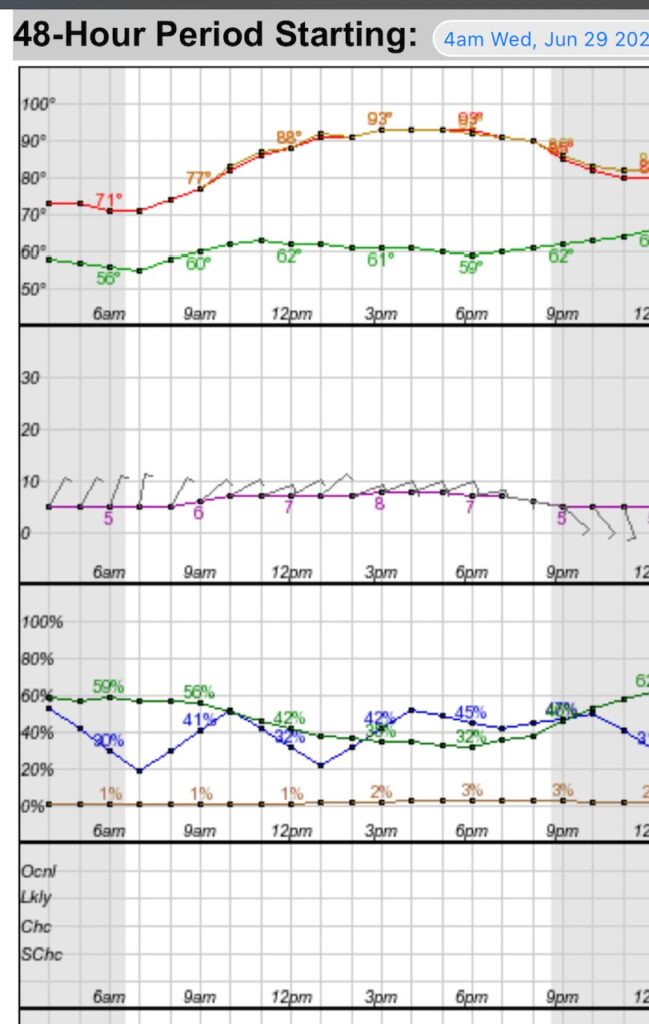 Areas B0099G, and B0180C to 347 — all downrigging to find fish, then horizontal MAL Dense work to capitalize on what we’d found.