WHO I FISHED WITH: This past Wednesday morning, 23 November, Mr. John Matthews and his wife, Retta, treated three of their grandkids, all sisters from Humble, TX, to a fishing trip on Lake Belton.

This was a “Kids Fish, Too!” trip just for kids, hence, it was both a bit shorter and a good bit less expensive than a standard adult trip.

Joining their grandparents were Eva (age 14), and twins Madison and Bradie Smith (age 11).  Two of the girls had never fished before.

We faced an uncertain weather forecast and, when all was said and done, experienced just about all manner of weather, short of frozen precipitation and a tornado, but, the girls were troopers and just kept smiling, talking, and catching fish through it all. 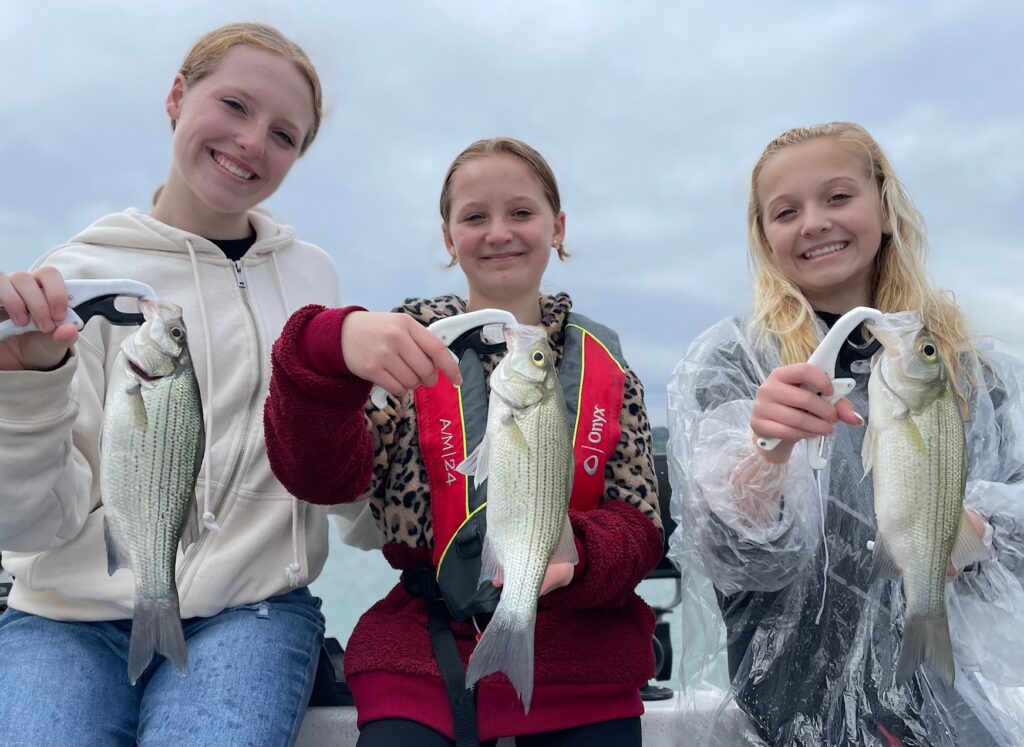 PHOTO CAPTION:  From left:  Eva, Madison, and Bradie Smith with a few of the white bass they worked Bladed Hazy Eye Slabs vertically to catch. 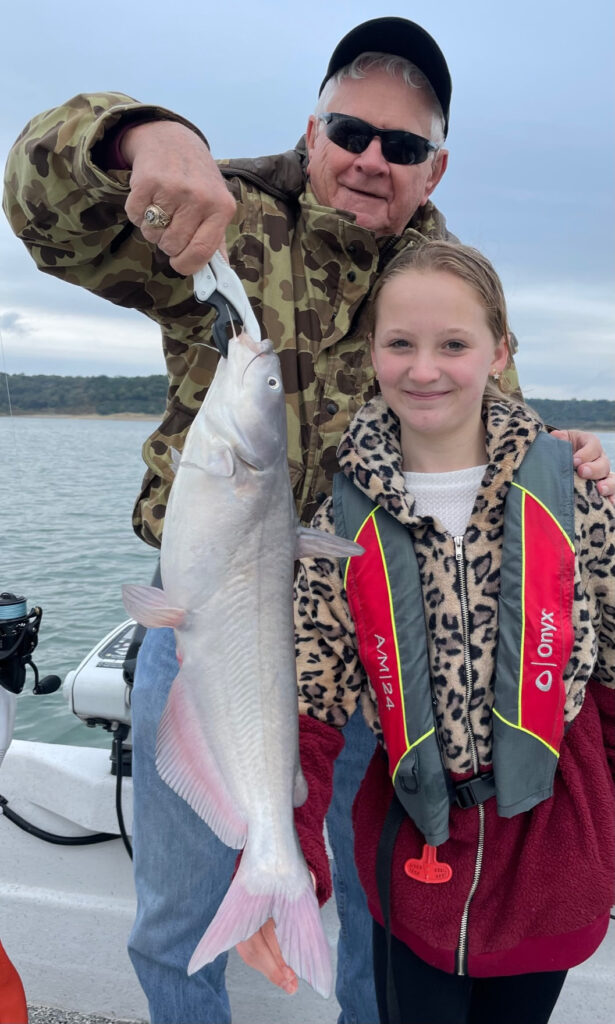 PHOTO CAPTION:  John Matthews gives his grandaughter, Madison Smith, a hand hoisting the 6.50 pound blue catfish she took from out of a school of white bass feeding on bottom in about 31 feet of water. 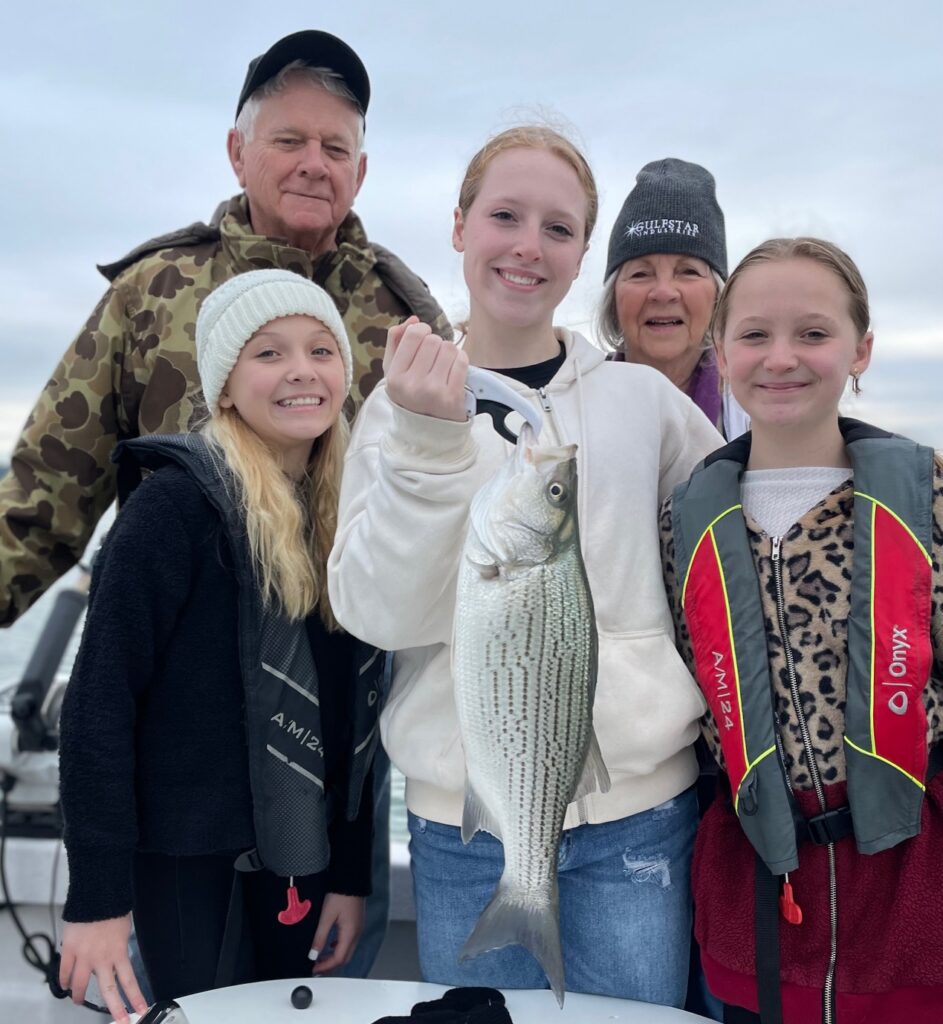 PHOTO CAPTION: Everyone celebrated Eva’s catch of our largest of three legal (18″ minimum) hybrid striped bass.  This one took a downrigged Pet Spoon worked about 3′ off bottom; it weighed 4.25 pounds. 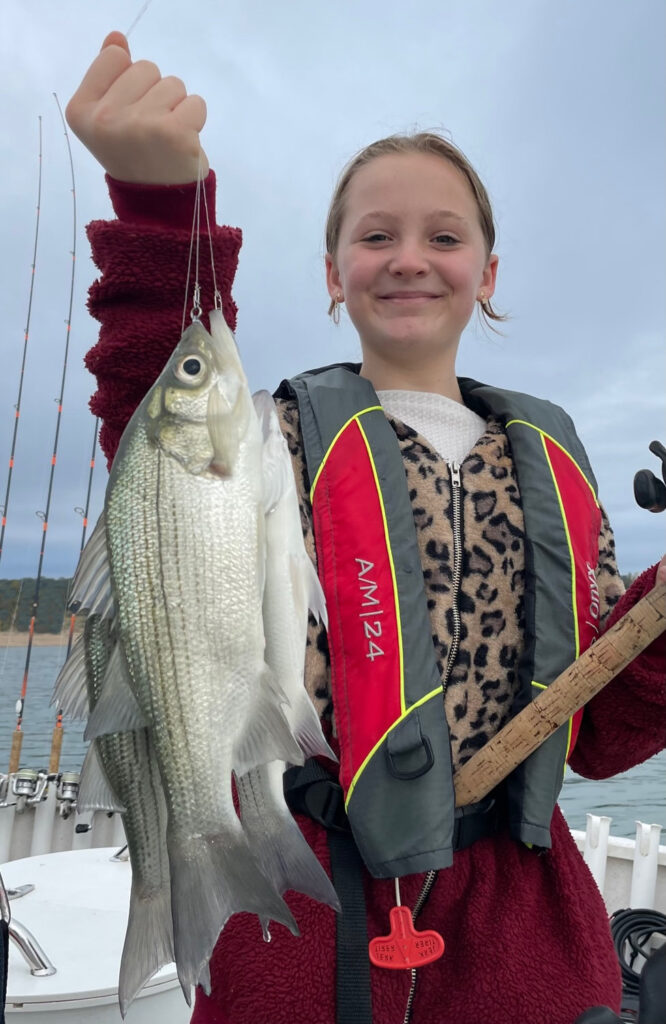 PHOTO CAPTION: Madison also landed both of the morning’s “triples”, catching three fish at the same time on each of the three Pet Spoons used on the 3-armed umbrella rigs were were downrigging with on occasion over well-scattered fish.

Our lengthy downward trend on water temperature continued today, making it an unheard of 13 consecutive days over which at no time did the air temperature exceed the water temperature.  This has led to one of the fastest lake cooldowns I’ve seen in my 30 years on Central Texas reservoirs.

Cold-blooded creatures just don’t take well to being chilled quickly — it’s like tossing a snake in a refrigerator and leaving him in there for a few days straight — he won’t come out near as lively as he went in!!

As I waited for my crew to arrive, I saw some very light topwater action on the calm, pre-dawn surface and mentally marked the general area where I’d seen that.  As we got going, I ran sonar over the area and found roving schools of white and small hybrids cruising around and eating shad.  I set us up with twin downriggers, each equipped with a 3-armed umbrella rigged outfitted with #13 Pet Spoons in a mix of white and yellow feathered tails.   We got right down to catching, with singles, doubles and one triple taken as the girls went through three rounds of downrigger releases each, accounting for a total of 16 fish in our first 45 minutes.

No sooner did this action die down than some bird activity cropped up about a mile away leading us to our next round of catching.  These birds were few in number (perhaps 20 gulls) and they were widely spread.  This typically means fish which are also well spread and mobile.  Sonar confirmed such was the case, so, after a short, fairly unsuccessful stab at vertical jigging, we went right back to downrigging and took another 9 fish fairly quickly.  As we were in the midst of this, a short-lived rain shower moved through and once it cleared, it was as if someone turned off the switch.  The birds disappeared, and the fish got harder to find and much harder to catch.  Even when we found great concentrations of fish and got on top of them, they were still hard to catch.

My water temperature profiling (see details below) indicated that we’ve finally broken that critical 60F mark at depth, so, for the first time since the early spring, I relied on other than the MAL Lure to do my vertical work, choosing the 21 gram (~5/8 oz.) white Bladed Hazy Eye Slab with stinger hook to catch our fish.

For the remainder of the trip we relied on this bait worked with a “slow smoking” retrieve to tempt the very reluctant fish we found.

Fortunately, all of the girls have a background in dance and so when I used the word “cadence” and demonstrated how to effectively move the bait upward off the bottom smoothly and steadily to a “count” or “beat”, they immediately picked up on what I meant.

This served them well and allowed for a steady catch of fish right up to the 11 o’clock hour when the fish voted that they were done. 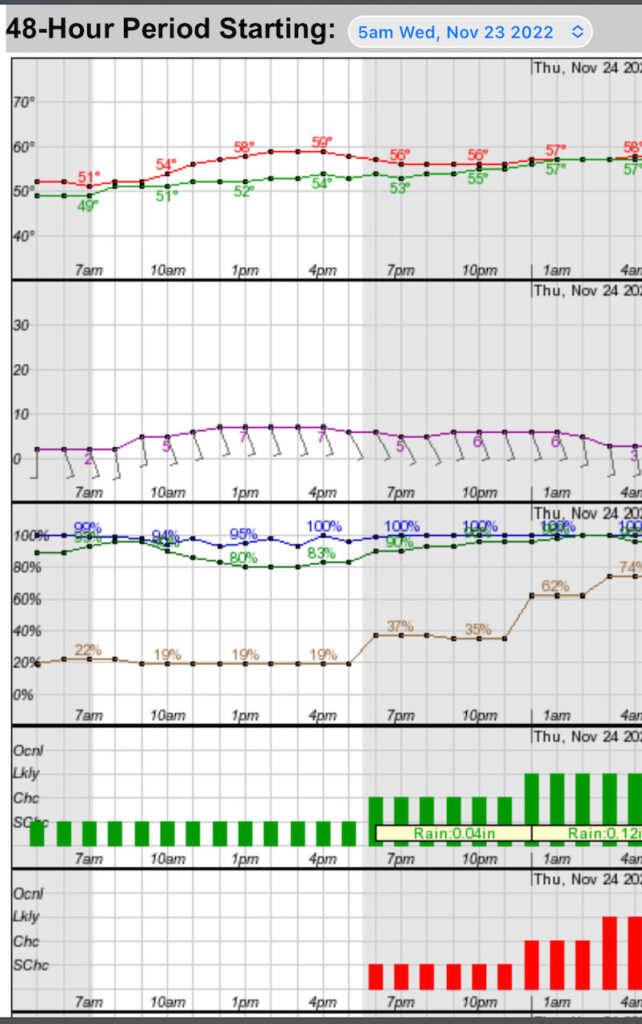