WHO I FISHED WITH:  This morning, Monday, August 15th, I fished with returning guest Dave K. and his three kids, Savannah (10) and twins Cole and Caden (7).

Dave first started fishing with me when Savannah was about 5 years old and the boys were too young to come.

Although our local school districts all went back in session for the 2022/2023 school year today, Dave and the gang traveled in from outside the area.  His kids start back on Wednesday.

Whenever all anglers participating are under the age of 17, and adults are not also fishing, such trips are eligible for my “Kids Fish, Too!” rates.  These trips normally go a maximum of 3.5 hours versus 4+ hours for adult trips, and, they start at $195 for up to two kids.  I don’t know of too many guided trips out there for that price point anymore — it is my way of trying to make guided fishing affordable for families and get kids engaged in the outdoors.

My next open date will be on August 30th. 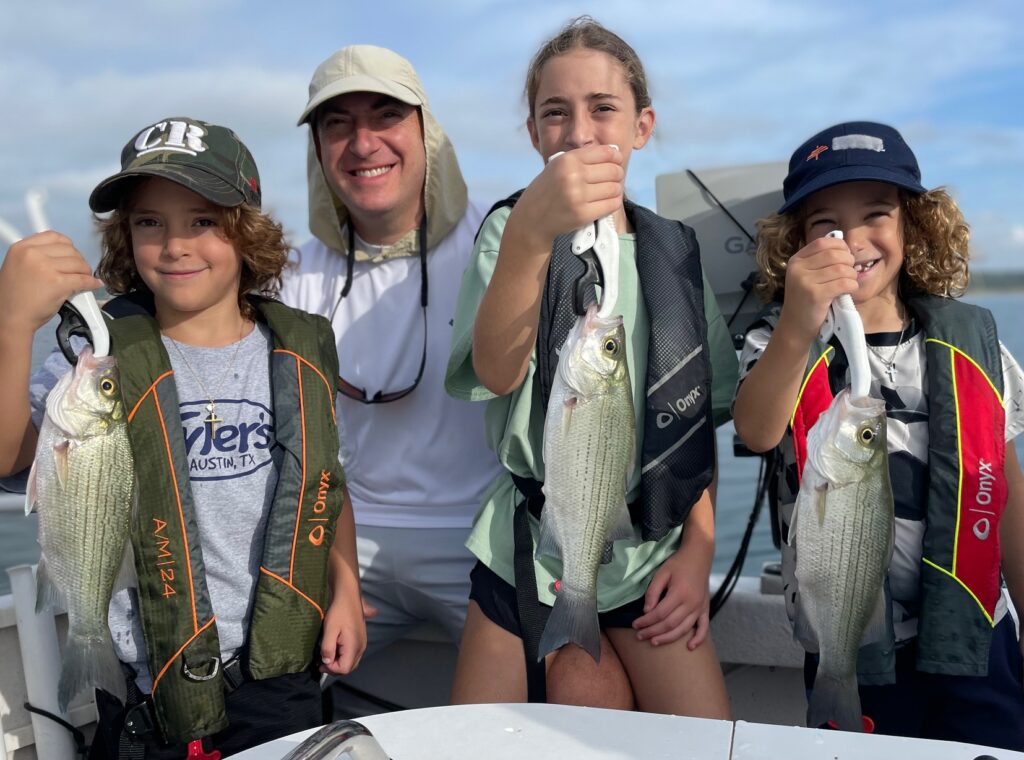 PHOTO CAPTION:  From left: Caden, Dave, Savannah, and Cole with a few of the 29 quality white bass we took by downrigging after the kids wore out the sunfish up in shallow water the hour before.

With three kids aboard, we kept it sweet and simple this morning.  Dave came with the mindset of being there to help me help the kids be successful, and that made a huge difference.

When the kids stepped aboard I had three 11 to 12′ bream rods ready to rock with slipfloats and live bait ready for dunking.  Savannah is an old hand at the sunfish catching by now, so, I put her working independently on the starboard side of the boat working a line of hydrilla, while Dave and I worked with the twins to do likewise on the port side.

Thanks to some cloud cover, the fish stayed shallow for an extended period of time, thus allowing us to catch more than we would have otherwise on a bright, cloudless morning.

When the novelty wore off the sunfishing about an hour in, the kids had landed a total of 40 sunfish, including bluegill, longears, and redears.

It was now time to transition to fishing for white bass.  I was glad the sunfish held up for a long while because, up to this point (around 8:15A) it had been windless.  Now, a light SE breeze was blowing just enough to ripple the surface.

As we made our way to where I thought the fish might be this morning, I saw multiple schools of white bass churning the surface along the way.  One area, in particular, had multiple, small schools working over a 75 yard area.  I stopped and put downriggers down and kept a sharp eye on 2D, DI, and SI sonar as we worked the area.  There was bait present, but not an abundance of gamefish, so, we moved on after landing just one white bass.

In 35-42 feet of water I found a very strong congregation of white bass holding in the lower third of the water column, clearly in a feeding posture.  We got twin downriggers working, each with a 3-armed umbrella rig equipped with #12 Pet Spoons.  In the 75 minutes which followed, we landed singles, doubles, and triple for a total of 28 additional white bass.

By the time the last few fish came aboard, the kids were handing the rod over to their dad to do the final few winds of the reel to land the fish because they had just about worn out.

At our 69th fish, Dave gave me the “let’s pack it up” signal and we headed back to the dock with fish caught, memories made, deer sighted, snacks eaten, stories told, and school on the near horizon.

Our tally of 69 fish consisted of 29 white bass and a mixed bag of 40 sunfish.

OBSERVATIONS:  The atmosphere was more humid and cloudy today, with SE winds.  This was caused by the passage of a tropical depression which passed between San Antonio and the border with Mexico overnight.

Wind Speed & Direction:  Calm for the first hour, then a slight ripple from the SE began 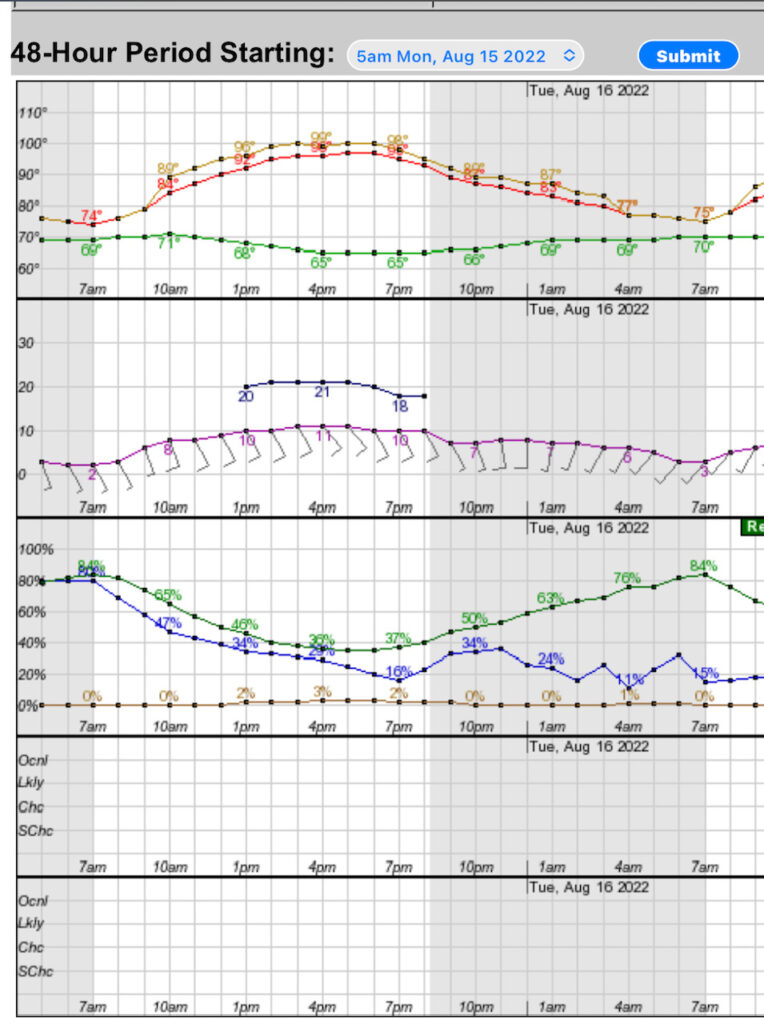