WHO I FISHED WITH:     This morning, Friday, August 23rd, I conducted the 2019 season’s 19th SKIFF trip as I welcomed aboard Elizabeth Fisher of Killeen.  Elizabeth is involved with a scouting organization called American Heritage Girls.  Her parents approached me about helping her fulfill the requirements for her merit badge in fishing, and I agreed.  Elizabeth’s father, Dale, is a disabled veteran who served 6 years in the U.S. Army’s Field Artillery branch working on 155-millimeter howitzers and 8-inch guns.  Elizabeth is home-schooled by her mom, Becky Fisher, and is 12 years old.

This fishing trip was provided to this military family at no charge.  S.K.I.F.F. stands for Soldiers’ Kids Involved in Fishing Fun.  This program began in May of 2009.  It is funded by the donations and fundraising efforts of the Austin Fly Fishers and other organizations they have partnered with.  S.K.I.F.F. provides the children of military personnel separated from their families due to duty commitments with the opportunity to go fishing.  In mid-2019, SKIFF also began providing trips to dependents whose parents’ have military-related disabilities.  I coordinate and conduct these 3.5 to 4 hour adventures on Belton Lake and Stillhouse Hollow Reservoir, just outside the gates of Fort Hood in Bell County, TX, year ’round. 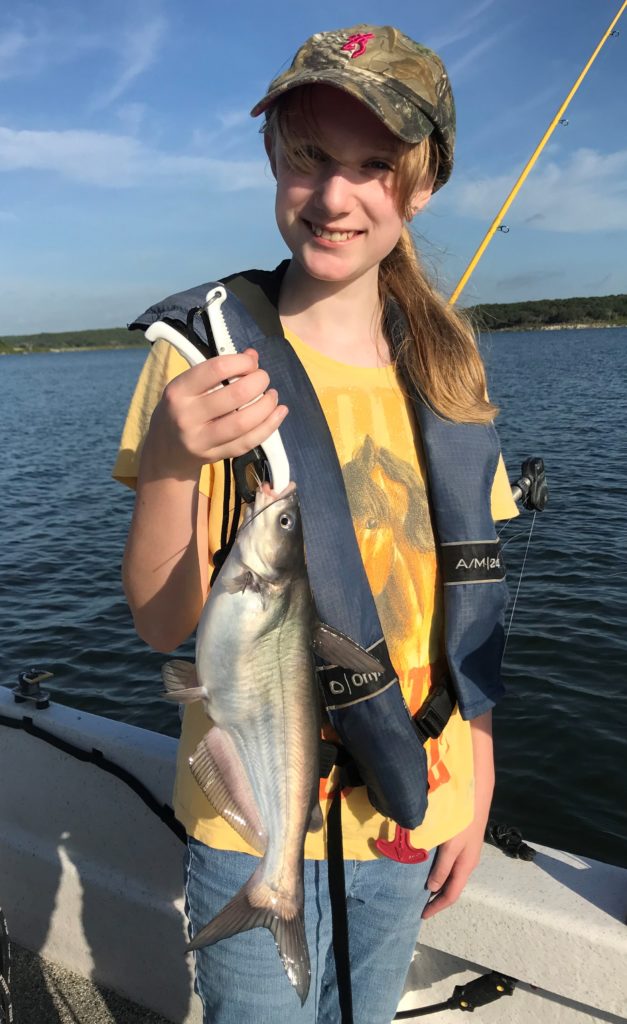 PHOTO CAPTION:   Elizabeth Fisher with a Lake Belton blue catfish — one of two in a row that hit our downrigged baits moving at 2.6 mph and which were suspended right along with schooled white bass about 23′ below the surface. 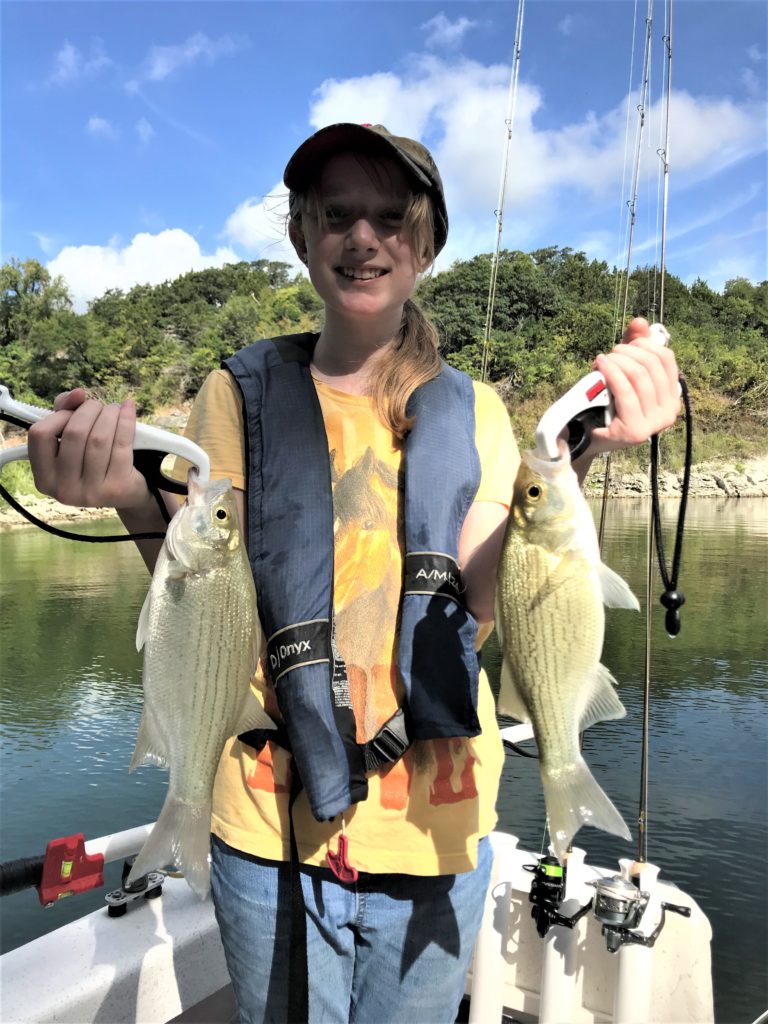 PHOTO CAPTION:  Elizabeth Fisher with a pair of white bass we landed on silver spoons — the white bass was one of eight different species of fish she landed this morning.

HOW WE FISHED: I prepared for this trip by reading, numerous times, through the requirements Elizabeth had to meet to obtain her merit badge.  Among others, these included:

We began our morning casting spinning gear equipped with small, shad-imitating spoons up shallow to white bass gorging themselves on shad during both the low-light time around sunrise, and then beyond that.  Thankfully, some grey cloud cover dimmed down the direct sun’s light and allowed us an extended time catching these fish.

Once this action died, we moved on to downrigging and landed singles, doubles, and triples of white bass, as well as two blue catfish on the downriggers set at 23 feet fished over a deeper bottom for suspended fish feeding upwards on bait.

We closed out the trip fishing up shallow in quiet, protected waters for sunfish using bait under a float.

Over the course of this trip, Elizabeth managed to land  several dozen white bass, a smallmouth bass, 2 blue catfish, bluegill sunfish, green sunfish, longear sunfish, longear/green sunfish hybrids, and spottail shiners — 8 species for a young lady who had never stepped foot on a boat before, and who was very new to casting with spinning gear.

Sky Conditions: 30% grey cloud coverage in the eastern sky which hindered a sudden sunrise brightening of the skies, then about 30% white clouds on a blue sky thereafter.