WHO I FISHED WITH: This past Wednesday evening I fished an evening trip with U.S. Army retiree Garrett Ralston and his 14-year-old son, Liam.

I normally decline trips on summer afternoons, especially if kids are involved, because the first 2.5 hours of a 4 hour trip will be predictably slow.

Garrett had limited time to spend with Liam before he headed back to California to start the new school year, and my mornings are full for the next several weeks, so, I offered a “short trip” just to take in the 3 hours of light.  Garrett agreed that would work for he and Liam, so we planned on it. 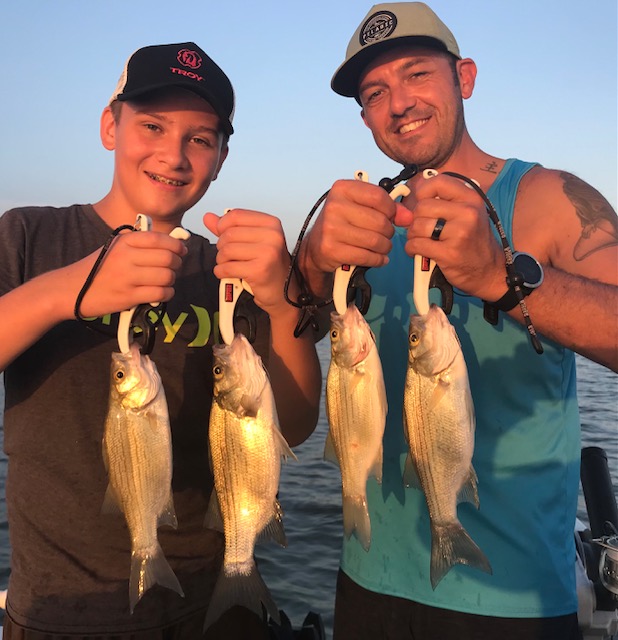 PHOTO CAPTION:  Liam Ralston and his dad, Garrett, with 4 of the 68 white bass they landed in high heat and humidity just before sunset using MAL Original Lures in chartreuse.

Summer afternoon fishing is predictably tough.  No matter where I’ve looked or what I’ve done in the past 29 years on Lake Belton, the white bass just don’t fire up until after 6PM, and, truth be told, most of the catching takes place minutes before, during, and after sunset.

Around 6:45, as we ran downriggers to cover lots of ground, watching my H’bird Solix’s side-imaging like a hawk, we began to see small schools of white bass beginning to coalesce and patrol.  I would spot them on side-imaging, mark them, then navigate back to them using my mapping function on my sonar unit.  Some schools moved before we got back to them, but some didn’t, and those that didn’t would yield a fish or two each.  Before long, enough schools were milling around in the area we were patrolling that I felt we could get them to respond to a vertical tactic using MAL Lures.

We chose MAL Heavy Lures in white for this work, and steadily caught singles and doubles as Garrett and Liam got accustomed to the assistance Garmin LiveScope offered them.

After about an hour at this, the light finally dimmed enough to spur fish to rise to the surface and trap shad there.  Although the feeding was not violent or splashy (because the bait is small and doesn’t require aggressive chasing on the part of the predator fish), it was noticeable on the nearly smooth lake’s surface.

We had the fish all to ourselves as the fed on topwater for about 40 minutes.  I had Garrett on my left and Liam on my right up on the bow casting deck as I ran the trolling motor manually seated between them, keeping them in casting distance and taking off fish as fast as they could catch them.

For this work, I chose long rods, large diameter spools, light line, and the MAL Original Lure in chartreuse.  The Original, although it doesn’t cast as far as the MAL Heavy, also does not sink as quickly, so, when I wanted to be sure my clients were keeping their retrieves up high in the water column where the fish were, I went with this 5/8 oz. bait over the 7/8 oz. bait.

OBSERVATIONS: USACE is releasing at 1,595 cfs on Belton.