WHO I FISHED WITH:  On Monday, May 11th, I fished both AM and PM.  In the evening I was joined by retired  Command Sergeant Major Terry Spidell and his son, Tyler, who is currently working his way toward licensure as a commercial airline pilot.

The Spidell’s have a shallow, 14′ skiff with basic sonar and a GPS-equipped Minn Kota trolling motor.  In addition to catching fish, the pair also wanted to see how they might use their equipment more effectively by learning how I put similar equipment to use in pursuit of white bass. 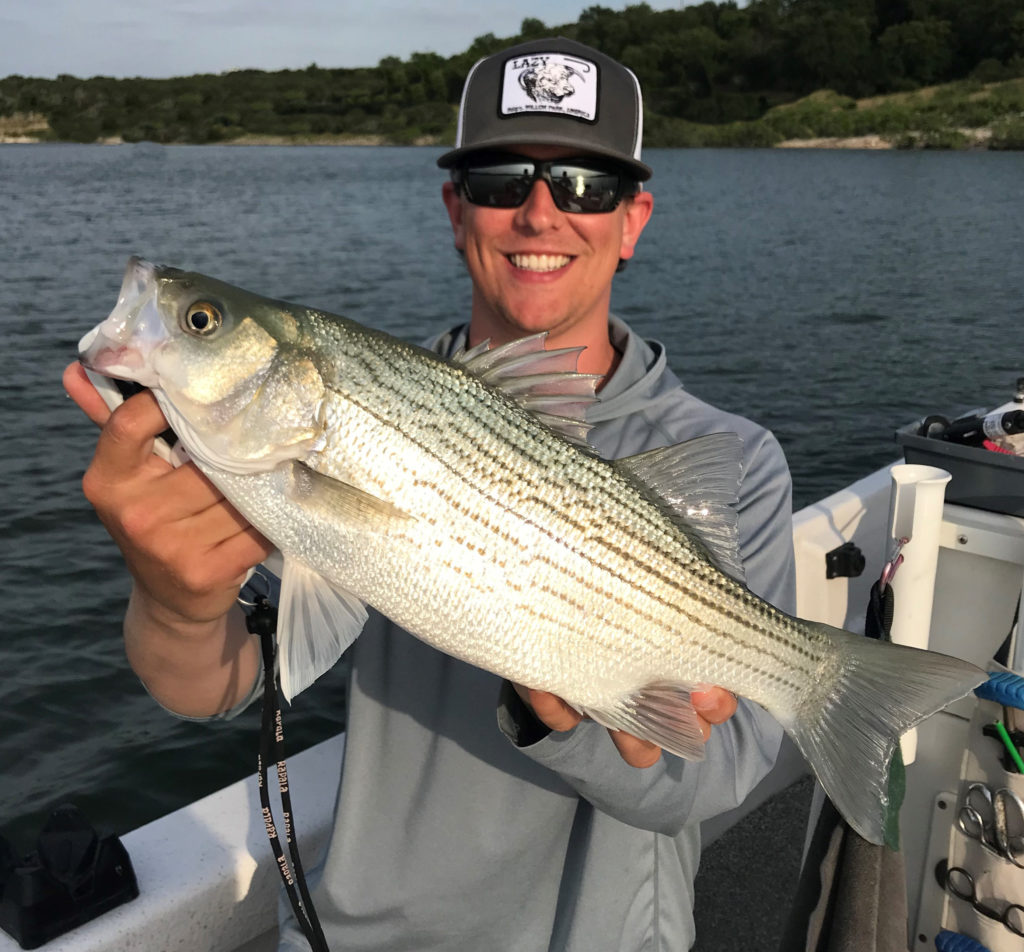 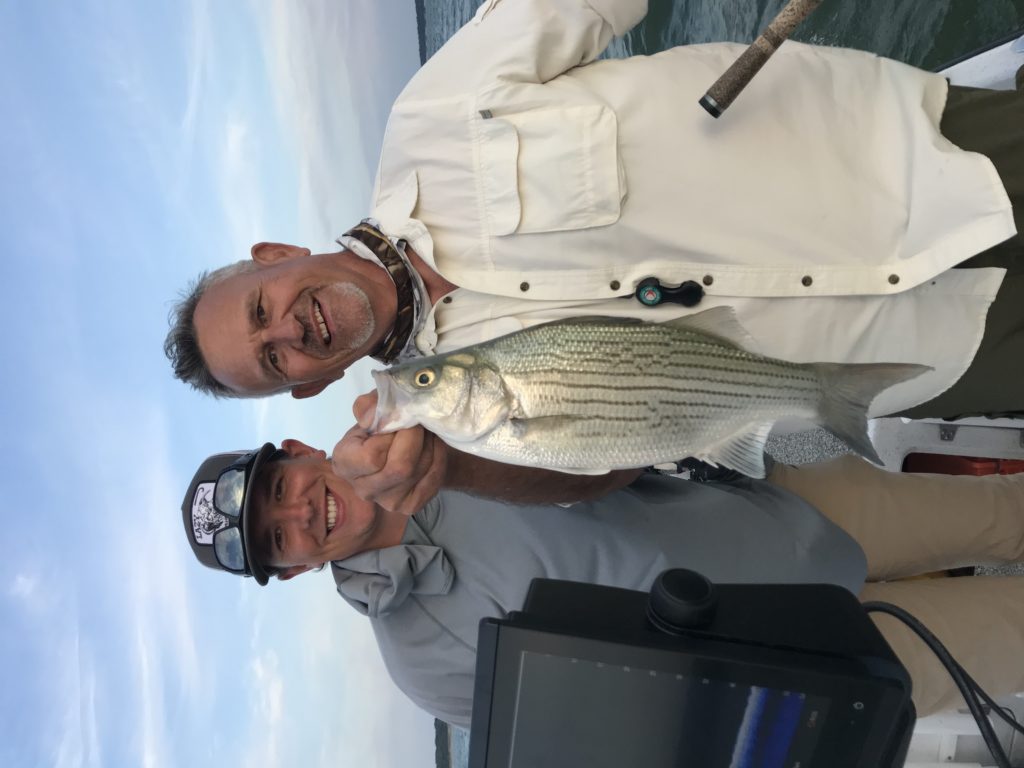 PHOTO CAPTION:   Tyler and his dad, Terry, with one of the 31 fish we landed in our final 25 minutes on the water. 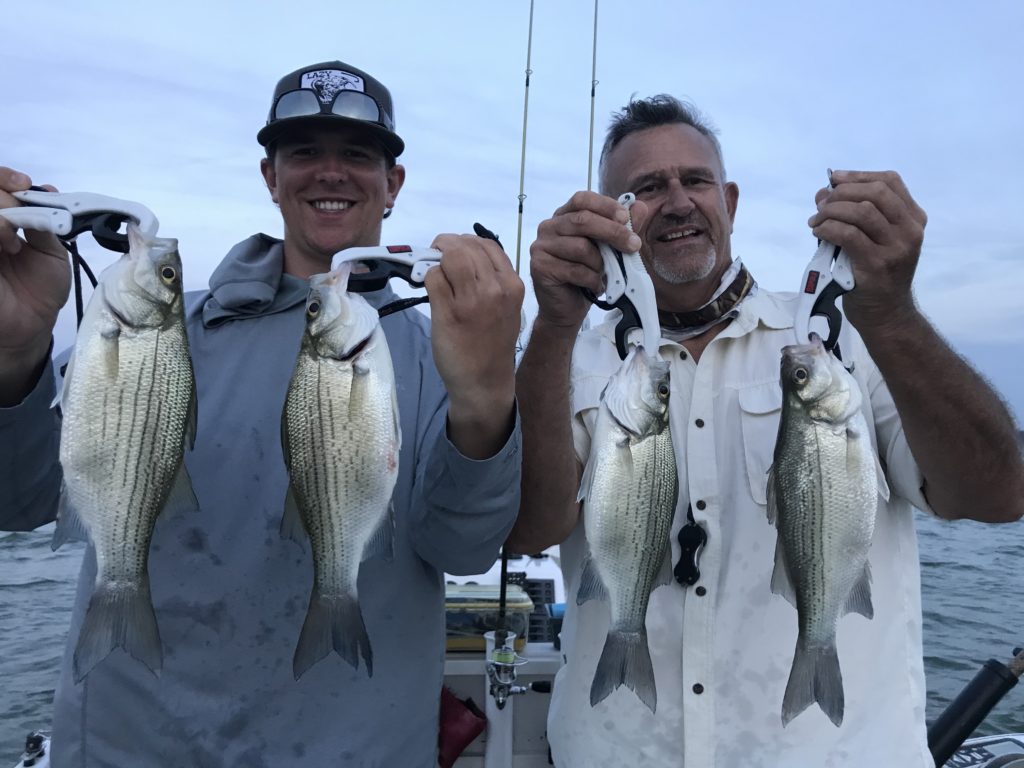 PHOTO CAPTION:   And some Belton Lake fatties as far as white bass go.  All taken on a 3/4 oz., white Hazy Eye Slab with stinger hook attached.

HOW WE FISHED: We fished artificial baits (my 3/4 oz. Hazy Eye Slabs with stinger hooks attached) vertically the entire trip in water from 12 to 48 feet, finding most of the fish and action between 35-47 feet.  I started off with the fundamentals of using a “smoking” tactic, they offered pointers on hooking and landing techniques to help improve our “strike to land” ratio.  Next, I layered in the use of LiveScope.  Terry was blown away at the video-like quality of this Garmin technology, and  Tyler, a self-confessed gadget nut, quickly grasped the concept of what was being shown and how to improve efficiency based on the data available.

We fished 5 areas with success and passed on 3 other areas where down-imaging, side-imaging, and colored sonar did not reveal evidence of aggressive fish behavior.

With about 25 minutes’ worth of light left to fish in, we motored into an area with our tally standing at exactly 60 fish.  I had commented to the fellows at the beginning of our afternoon that afternoon trips typically start slowly and end well, which is just the opposite of morning trips.

In those 25 minutes, we boated more than a fish per minute, taking our final tally up to 91 fish.  That equates to 34% of our catch made in the last 9% of our time on the water.

When all was said and done, the fellows had a blast and were encouraged that they would be able to do better going forward while fishing on their own.

OBSERVATIONS:  No laughing gull action observed this evening.  Saw gizzard shad in great quantities feeding on the surface between vic 0147 and the shore, over 9-12 feet of water.  We cast into them thinking initially that they were being driven to the surface by gamefish, but, on closer inspection we saw this was a feeding behavior by the shad. 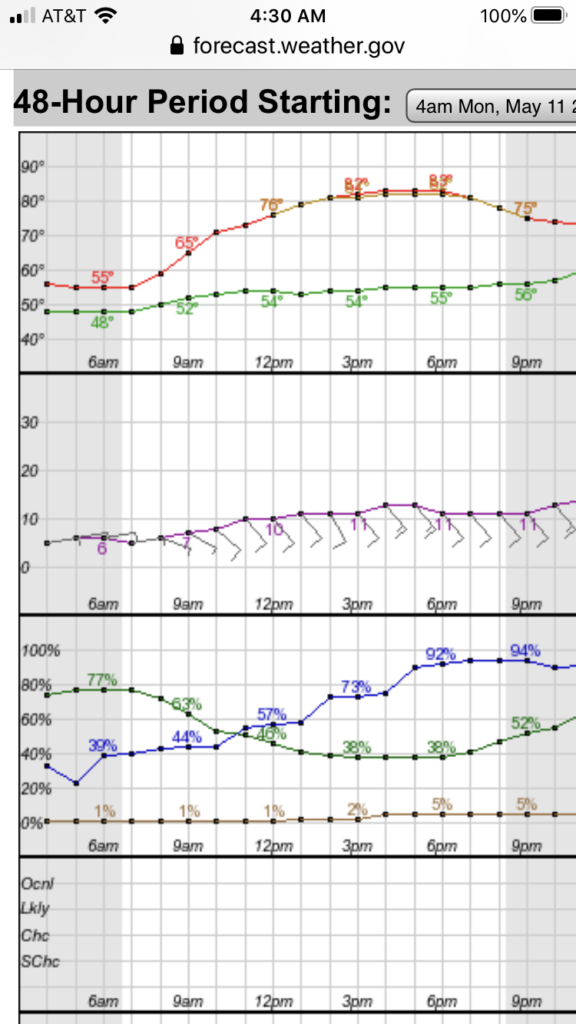 WHO I FISHED WITH:  On Monday, May 11th, I fished both AM and PM.  In the morning I was joined by a crew honcho’d by Mr. Jack Oliver of Marble Falls, TX.  Joining him were his brother, Jamie Oliver, and three friends, Hank, Mark, and Lance.

We were hunting hybrid on Belton. 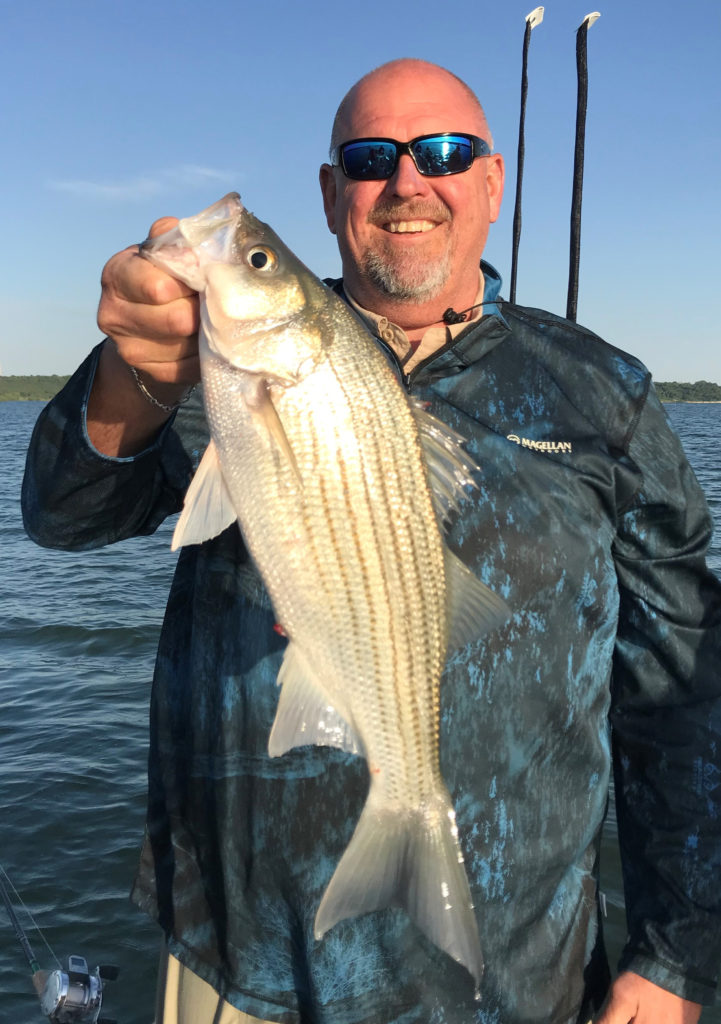 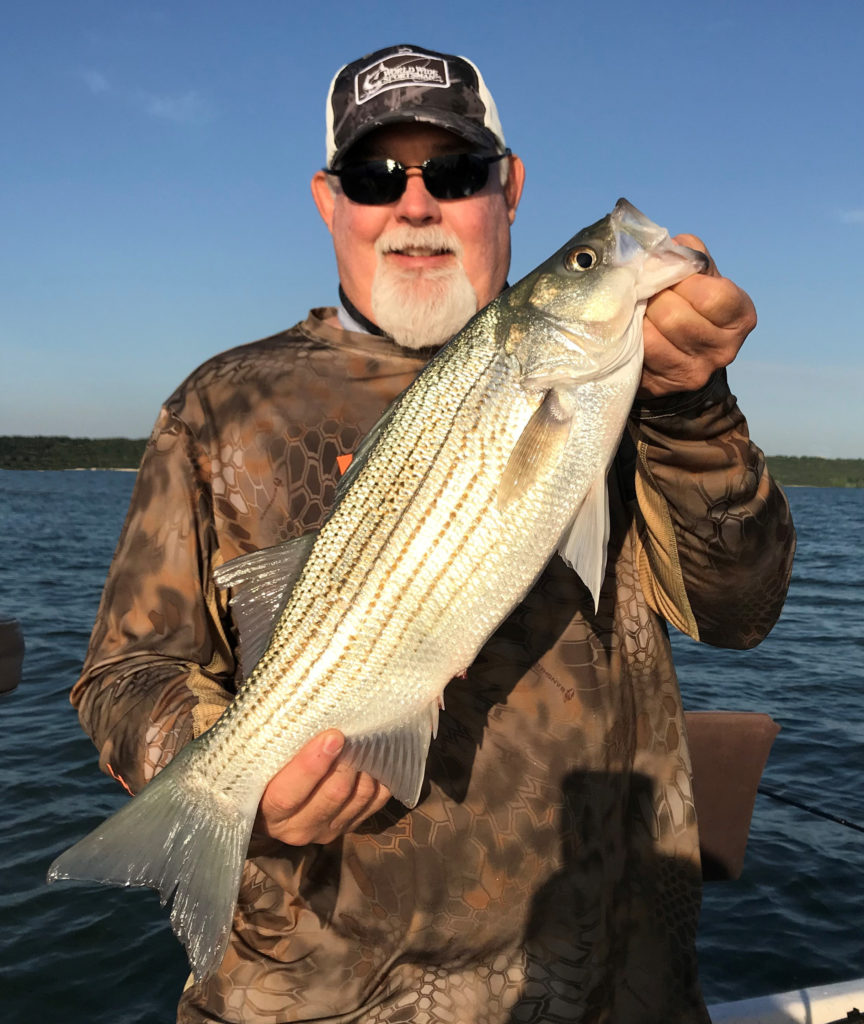 PHOTO CAPTION:   Mark took this long-bodied hybrid which looked more like a full-blooded striper than most hybrid do. 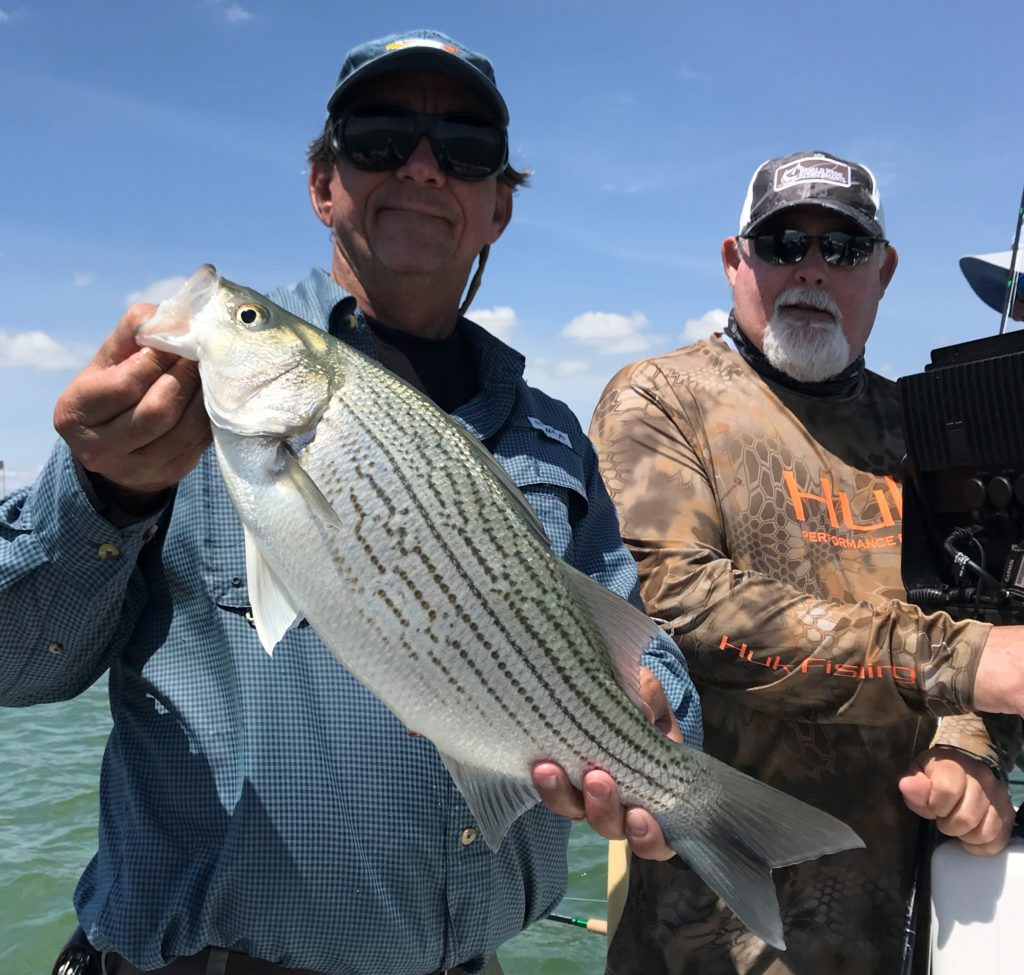 PHOTO CAPTION:   The white bass seemed particularly fond of executing “hit and run” tactics on Hank this morning, but, he got the last laugh and landed our final legal fish of the morning right at noontime.

PHOTO CAPTION:   As you might expect from a counselor, Jamie talked most of his fish into biting with calm, soothing words and tones. 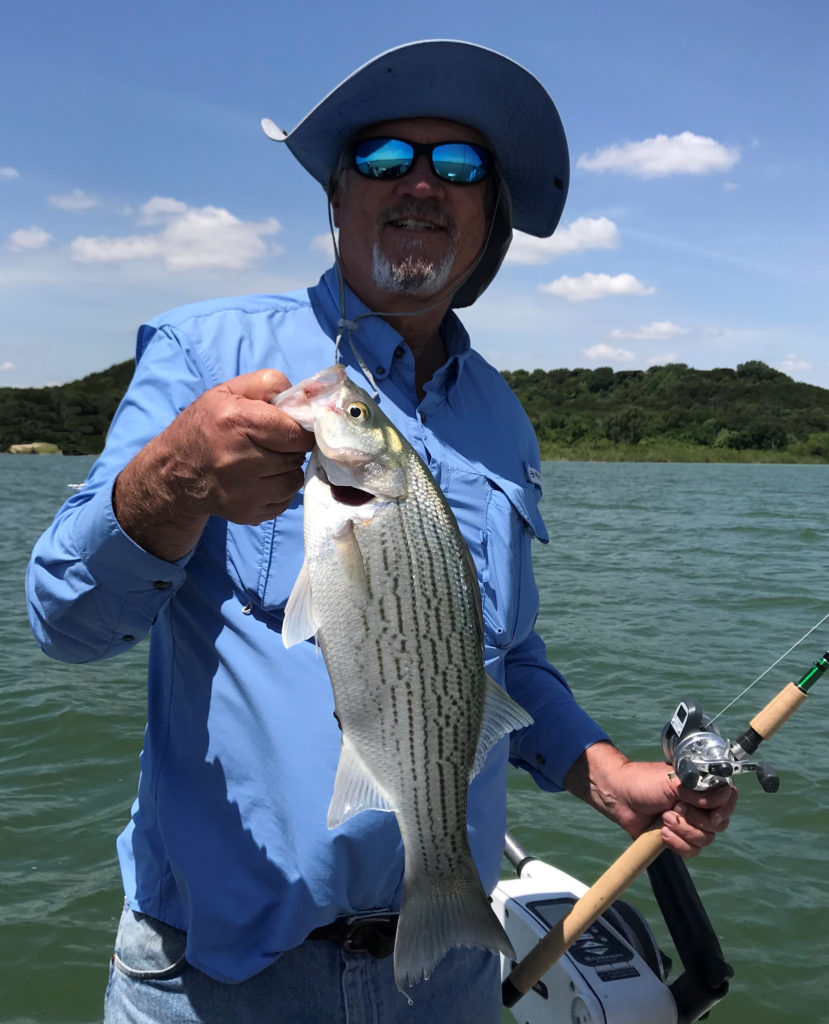 PHOTO CAPTION:   And, last, but not least, the host with the most — Jack Oliver who coordinated the the trip for this morning’s crew.

HOW WE FISHED:  The first indicator that the stars were just not aligned quite right for us was the noticeably weak shad spawning activity.  Both me and Mr. Bill P. have been right on top of the shad situation for quite a while now and, yesterday, both of us struggled to find the great quantities which make bait gathering a rather simple chore this time of year.  We also had calm winds which picked up from the ESE under bright skies once they did begin.

Long story short, we hunted hybrid for 5.25 hours and never really got into them really well.  We landed a total of 19 legal hybrid as well as 3 just-short ones, but they all came as pairs and triples outside of one short burst of action around 7:50 to 8:20.

Additionally, the white bass really made their presence known this morning, either already being located at, or quickly arriving at, every single one of the areas we fished this morning.

Fortunately, by extending the trip, we were able to end on a strong note with a nice run of hybrid action, but otherwise, it was more slow-going this morning.

We landed 84 fish in all, including 19 legal hybrid, 3 short hybrid, 1 drum, 4 blue catfish, 1 channel catfish, and 56 white bass, most of which were healthy 2-year class fish.