WHO I FISHED WITH:  This past Friday evening I fished with Steve Niemeier and his grandson, Caleb Fowler.  If that name rings a bell, it is because Caleb is the young man who, back in March of this year, set a new Stillhouse Junior Angler record for the blue catfish category with a 17+ pound monster.

Today will not be one I look back upon with fond memories, although the day was quite memorable.

Originally, I met Steve, Caleb, and Caleb’s sister, Macy, at 7AM for a long-awaited hybrid striped bass fishing trip.  As was the case the previous two mornings since the gates were opened and releasing water, the bite was super-slow for the first 2 hours.

At exactly 9:12, we spotted our first really good school of fish which I knew would provide us with some action.  As my Ulterra trolling motor deployed and then started to take us to the spot I’d located our fish at, it literally powered itself loose from the mounting bracket and wound up in the water, prop still spinning.

I ran to the front deck to grab it (it was still attached via the power cable and coiled steering command cable) and held on for dear life while talking Steve through how to shut it down with the remote control located near him.  We got it shut off and recovered, then I tried remounting it.  The 4 stainless steel bolts threaded into the aluminum “quick release” bracket had, over time and with much use, just worn out the aluminum threading.  As soon as I tried testing the motor, it came off a second time and we had to call it quits, agreeing to meet back up in the afternoon for a white bass fishing trip, instead, assuming I could fix the motor.  Yes, it is truly a “quick release” bracket!!!

Here’s the silver lining: The guys and gals at Texas Boat World picked up my call on the first ring (thanks, Maggie), then Ken in parts let me know what my options were.  When I got there about 40 minutes later, Jay in service was all ready to get helicoils in my aluminum base.  Ronnie came out and visited with me and made sure my blood pressure did not exceed safe limits. Ken and Jay worked together quickly to get me back up and running, function-checked, and out the door.  Just awesome!!  Heck, I even had time for a 25 minute nap before heading back to Belton to try again.

So as not to provide an encore performance, I elected to through-bolt two of the four bolts in that bracket.  It adds a step to sliding the bracket off, but, in the 4 years I’ve owned that motor, I’ve only done that 3 or 4 times anyway. 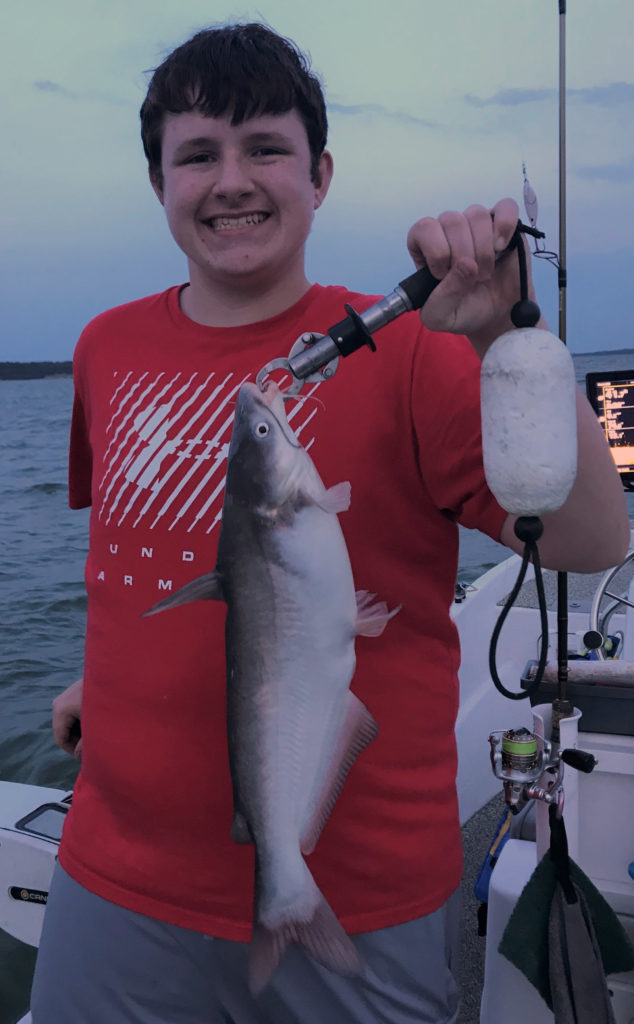 HOW WE FISHED: As we ventured out on Belton, fishing was tough for the first two hours of the afternoon.  I looked over a lot of water, finding some shad and a lot of blue catfish, but no real strong signs of white bass or hybrid.

I looked at the hydrologic data for Belton prior to the trip and saw that the 1607 CFS flow had been reduced back to 17CFS (essentially closed gates).  So, after 4 days of flowing what had become the norm, we now had yet another significant factor to deal with, creating the beginning of another new normal.  This day was getting really interesting!!

Finally, just prior to 6PM, we found a nice school of white bass laying tight to bottom in about 28-32 feet of water.  We all hooked up on our first slab drop down to them and kept right on catching pretty consistently in this area for about an hour.  During this time we “short hopped” in the same vicinity two more times.  Finally, around 7:10PM, these fish shut down.

We moved to another area which was a bit more wind exposed and found fish getting poised for the final, low-light feed right at 7:15PM.  Just as we stared to get into them, the wind ramped up suddenly about 8 mph more than the 12 or 13 mph it was already blowing.

We had discussed shooting for white bass for the majority of the trip, then hanging bait for the final hour when hybrid action typically increases.  Now, the wave action made the bait option a non-option.  We stuck with our slabbing until the wind, evidently related to distant thunderstorms to our south, decreased.  We were able to fish with bait in the final 20 minutes prior to dark, but that only produced the same white bass we’d been catching, as well a nice 3-pound class blue catfish.

Caleb, in the 12 years I’ve fished with him, has always had a “thing” for catfish.  When he was in scouts, we specifically caught and kept one (likely the only fish ever kept by my guide business) so he could clean and cook it himself to earn some manner of badge or award for doing so.  At least the day ended on a good note.

Wind Speed & Direction:  SSE12, then ramping up suddenly around 7:30P 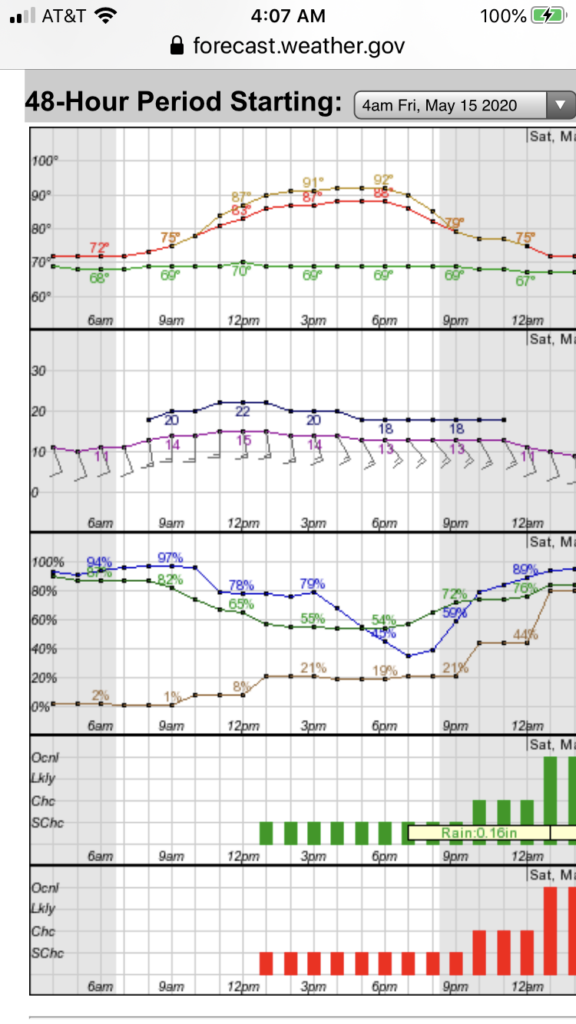