WHO I FISHED WITH: This past Saturday morning, October 31st, I fished with three friends from the Austin area.

Stiles Parker, who fished with me once before over the summer, accompanied by his brother, arranged this trip for himself and two of his brother’s co-workers — Paul Geyman and Chris Mitchell.

All had prior fishing experience, but not with the tactics we employed today. 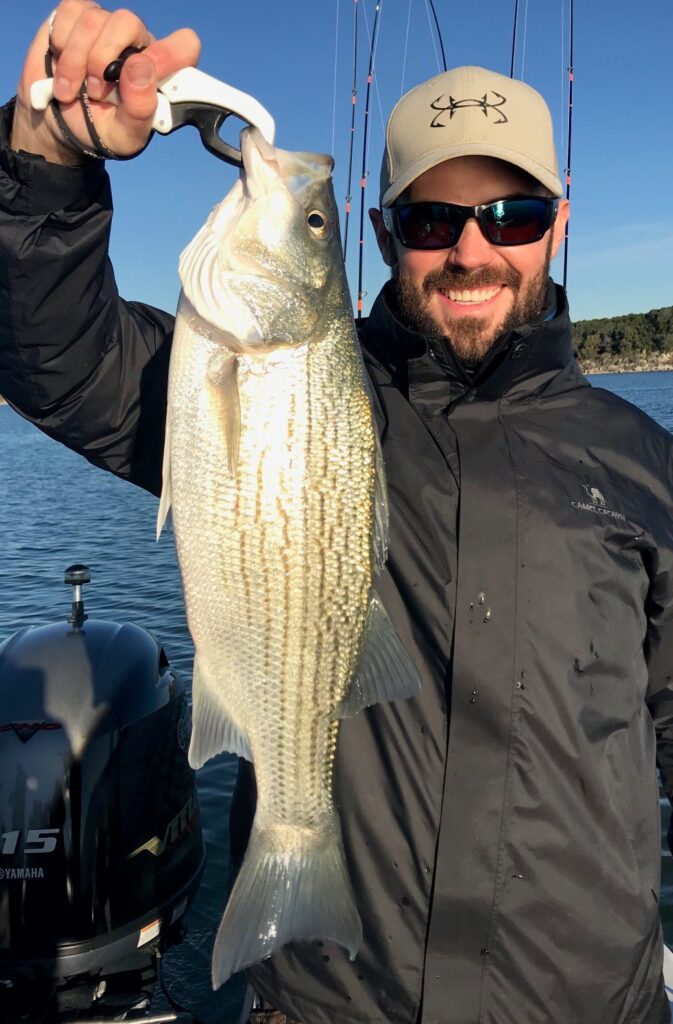 PHOTO CAPTION #1:   That’s Chris Mitchell — he landed the largest of our 151 fish this morning.  This hybrid, and four other keepers like it, were mixed in with a nice school of white bass in about 38 feet of water. 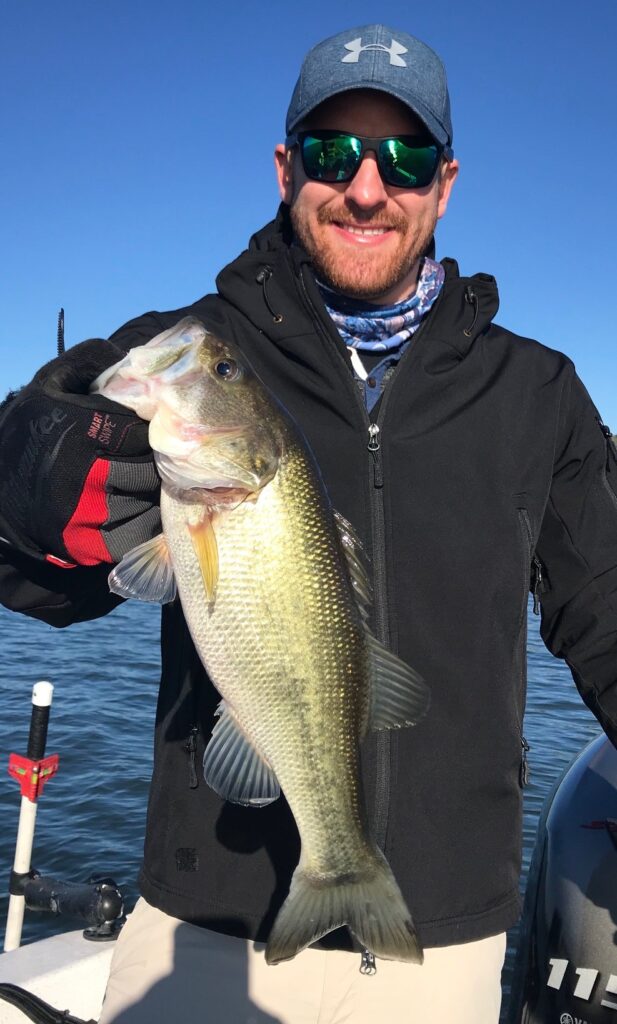 PHOTO CAPTION #2: The largemouth bass count coming out of deep water is starting to rise.  Note how nicely colored this bass is.  It has not been in deep water very long. 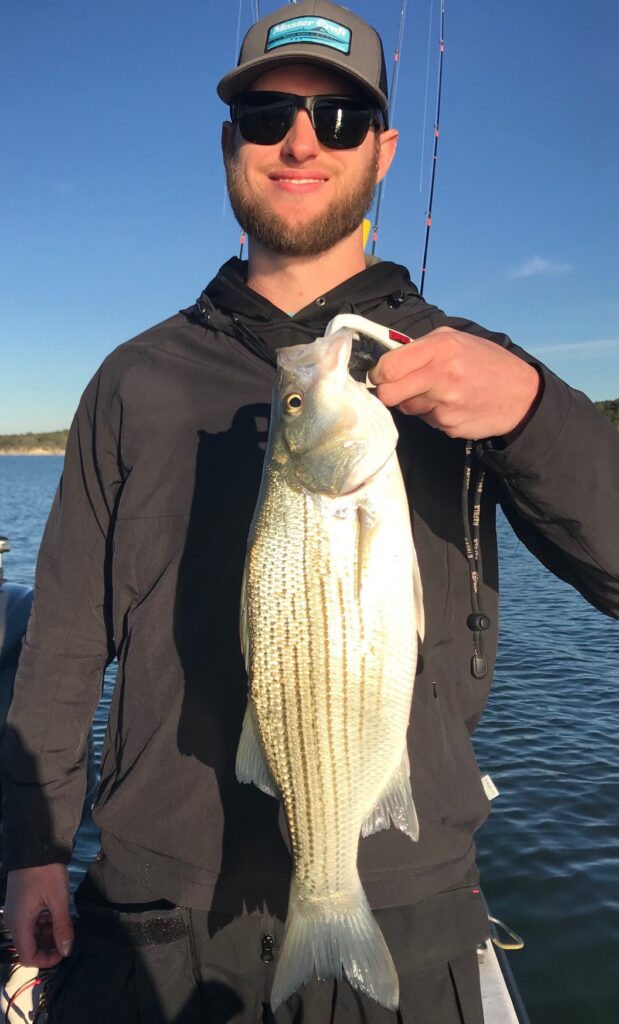 PHOTO CAPTION #3: Paul took this hybrid on a white MAL Lure.  It came out of the same school that Chris’ hybrid came from, and just minutes apart. 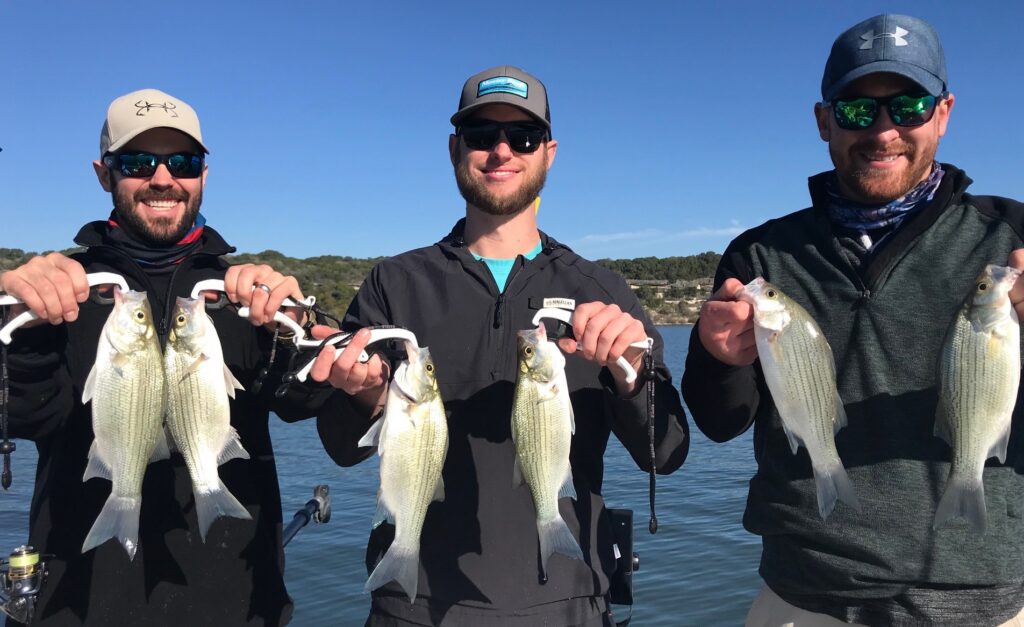 I spoke with Stiles by phone in advance of the trip letting him know the bright skies and calm winds would make things tough as long as they persisted, and, they did.

We went fishless for 1.25 hours until, around 9AM, the southerly winds began to ripple the surface and, just a few minutes thereafter, the fish turned on.  From that point until the close of the trip, we found fish consistently and the fish we found cooperated consistently.

Each of the three areas we fish produced similarly in that the fish first presented in a positive posture on bottom, then, as we created commotion with our presentations, they pulled up off bottom into the entire lower third of the water column, with occasional fish coming up as much as half way off bottom.  We found these “high flyers” were typically small fish.

The MAL Lure worked with a plain-Jane retrieve from bottom up through the fish very well today — it wound up being the only thing we caught fish on this morning, as the low-light downrigger bite seems to have died.  White and chartreuse MAL Lures were used interchangeably and worked equally well.

OBSERVATIONS: Spotted the first gulls on Lake Belton which were actually “working” the lake looking for food.  Their behavior did not aid in finding fish, but, at least we have a few present now, and more to come.