WHO I FISHED WITH: This past Saturday evening, Halloween 2020, I fished with three generations aboard.

Richard Kusak arranged this trip after being referred my way by Belton chief of police, Gene Ellis.  Richard, a former military policeman and Belton police officer, brought along his dad, Randy Kurzinsky, and his 12-year-old son, RJ Kusak.

Randy is part of the United Steel Workers’ Union up in Ohio and works as a heavy machinery mechanic in a scrap yard there.  He loves leaving the cold behind and visiting Texas, especially this time of year.

RJ is working his way through middle school with the Belton Independent School District and is attending class in person where he plays bassoon in addition to his academics. 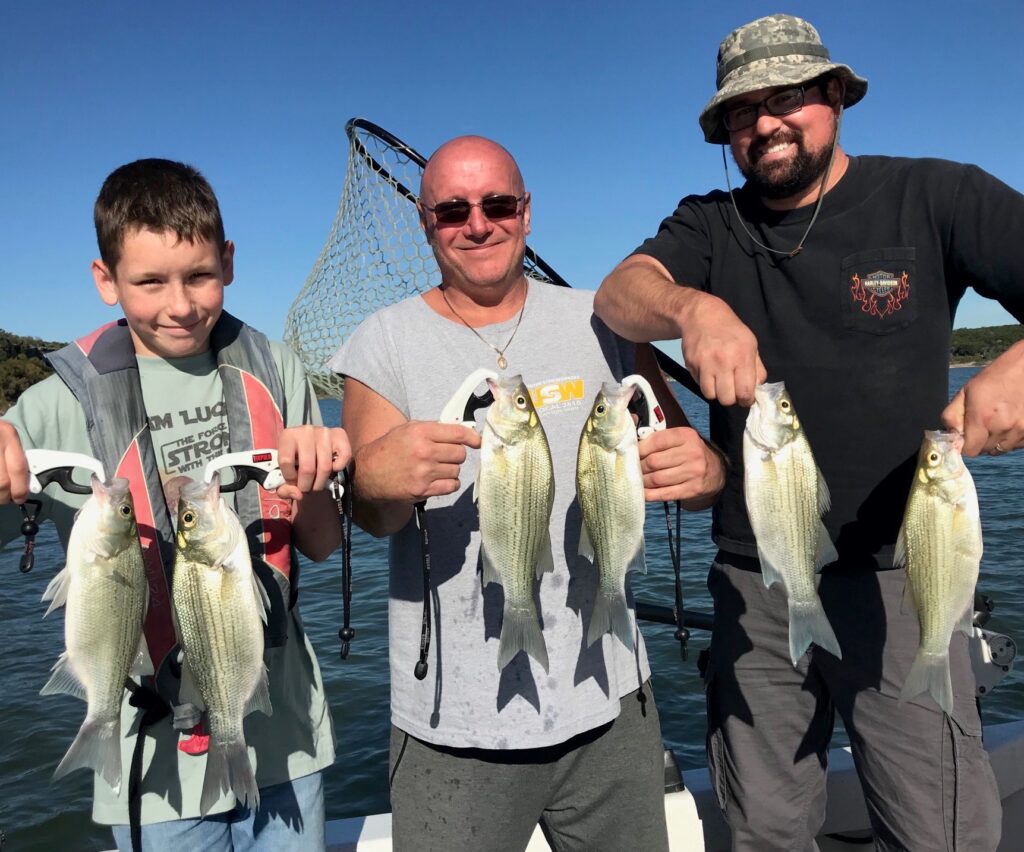 PHOTO CAPTION #1:   From left: RJ Kusak, Randy Kurzinsky, and Richard Kuzak with some of the solid white bass we took on Halloween 2020. 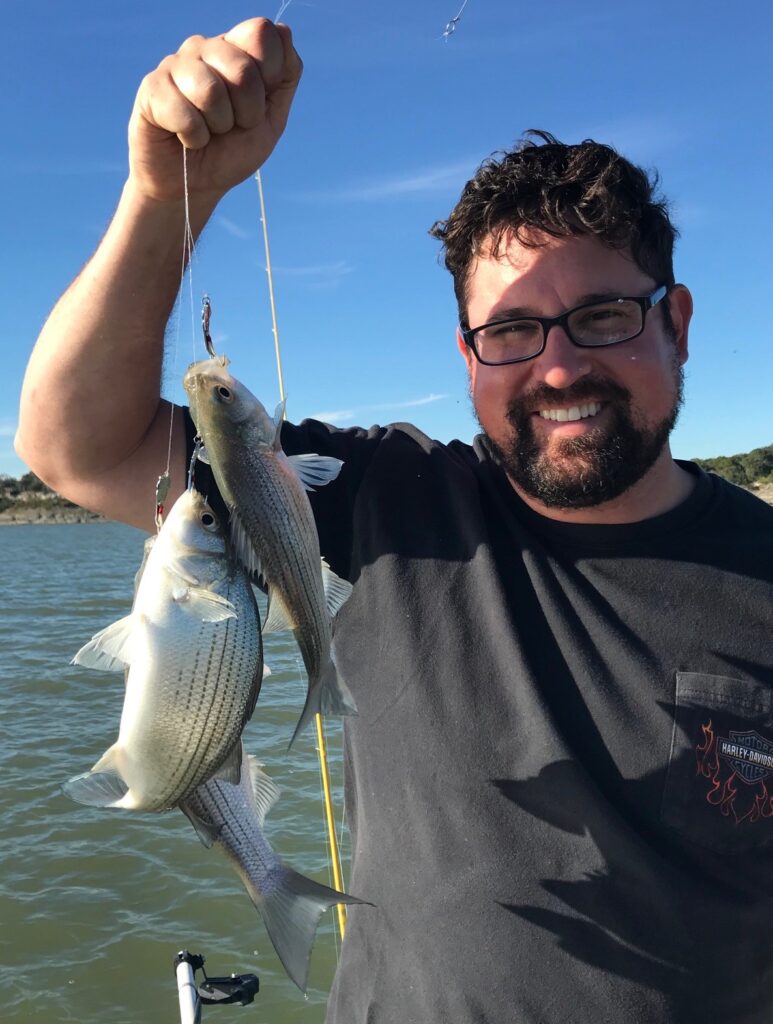 PHOTO CAPTION #2:  Triple!!  We tried downrigging for variety’s sake and to give RJ’s wrist a break, and Richard came up with 2 sets of triples on the 3-armed umbrella rig equipped with Pet Spoons. 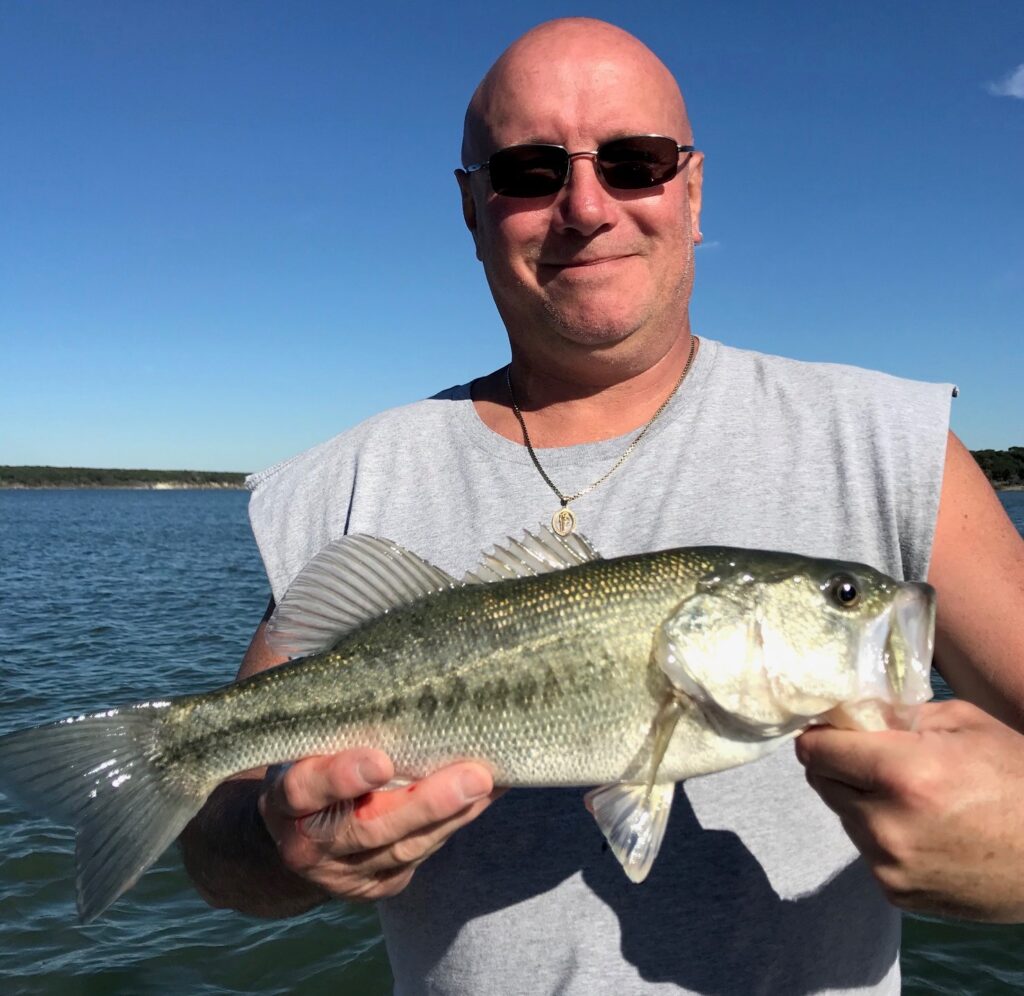 PHOTO CAPTION #3: Here’s Randy K. with a nice largemouth taken from amidst a large school of white bass.  As I’ve noted several times this past week, brightly colored largemouth are now beginning to show up in deep water. 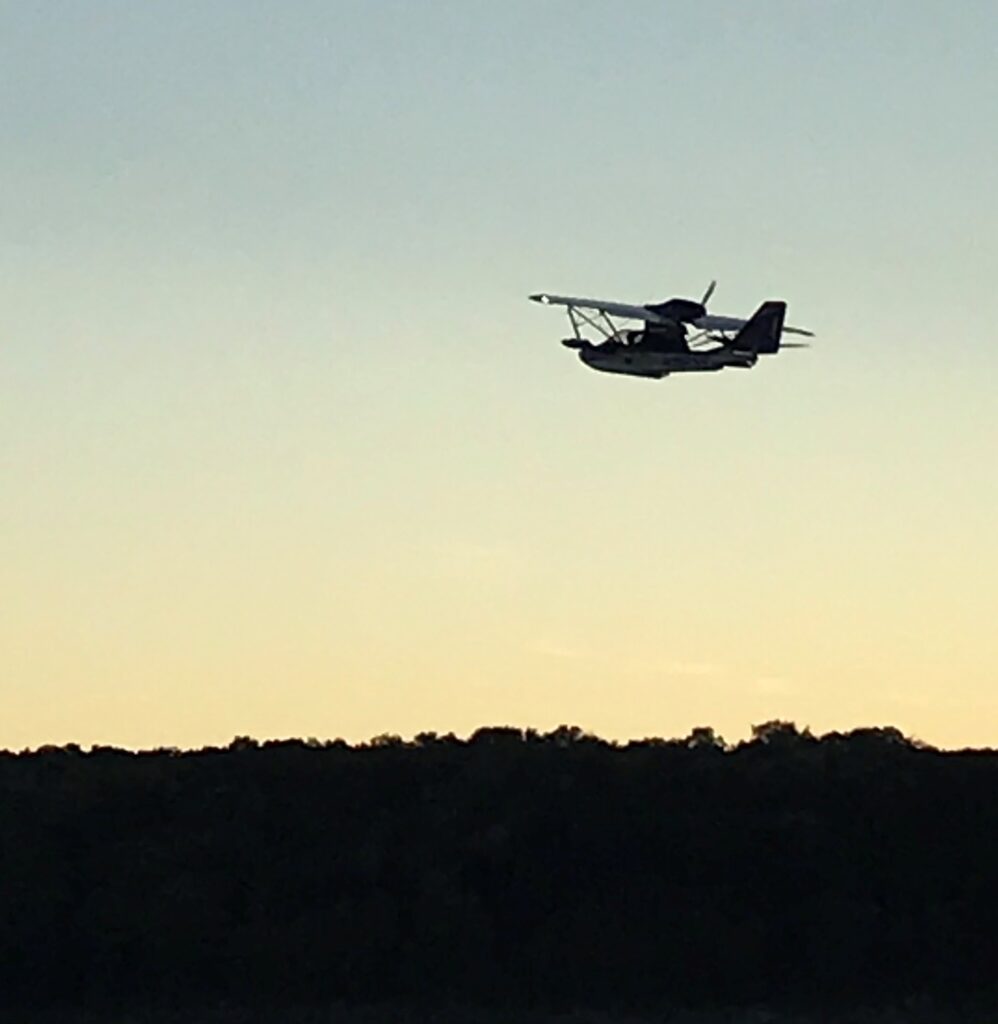 PHOTO CAPTION #4:  I captured this image just after sunset as a small, single-engine float plane which was doing “touch and go” practice all day, came near enough for a photo.

This afternoon with picked up right were we’d left off this morning as the afternoon bite got underway, then tapered up to a peak, then dropped off beginning around 5:30P.

We caught fish in rapid succession by working MAL Lures in both white and chartreuse vertically over heavily congregated fish at three distinct areas.  These fish were “glued” to the bottom when we first detected them on sonar, then got “teased” up into the lower third of the water column after we began catching them.  The commotion caused by reeling fish in, working the MAL Lures, and the feces and regurgitated fish falling down from the fish we’d hooked, just served to attract more fish and get a frenzy going.

This morning’s downrigging attempt was a flop with no fish to show for the effort, so, I was a bit leary about doing this, but, we’d already caught a bunch of fish and so I thought a short experiment wouldn’t hurt.

We got re-tooled for downrigging and, no sooner did the balls go down than Richard came up with a triple and RJ came up with a double.  We continued downrigging as long as the fish were willing to bite horizontally moving baits, which was until right around 5:30, when there was a very distinct decrease in the action.  Richard actually wound up catching back-to-back triples — a pretty rare event.  We landed another 23 fish downrigging, and, as we wrapped that up, our tally stood at 103 fish

After the 5:30 slowdown, we looked at 4 other areas and sonar revealed nothing at each one.  We persisted, and found one last patch of fish.  This school gave up a final 22 fish for a grand total catch on the evening of 125 fish.

OBSERVATIONS:  Had reliable report of white bass popping shad in last 90 minutes prior to sunset in the vicinity of Area B0047C.