WHO I FISHED WITH: This past Tuesday morning, November 24th, I fished with contingents from the Van Riper clan and the Howley clan.

The patriarch of the family, George Van Riper, a U.S. Army veteran who resides in Harker Heights, loves fishing, owns his own boat, fishes our local reservoirs routinely, and has fished with me on numerous occasions.

Nearly two months ago, knowing the Thanksgiving timeframe is a busy week for me, George set this trip up for his daughter, Nancy Howley, his daughter-in-law, Kim Van Riper, Nancy’s boys, Kaden and Jacob, and Kim’s son, Gregory.

Nancy is a public school teacher, and Kim is into real estate.  The boys are doing the best they can with a COVID-impacted school year. 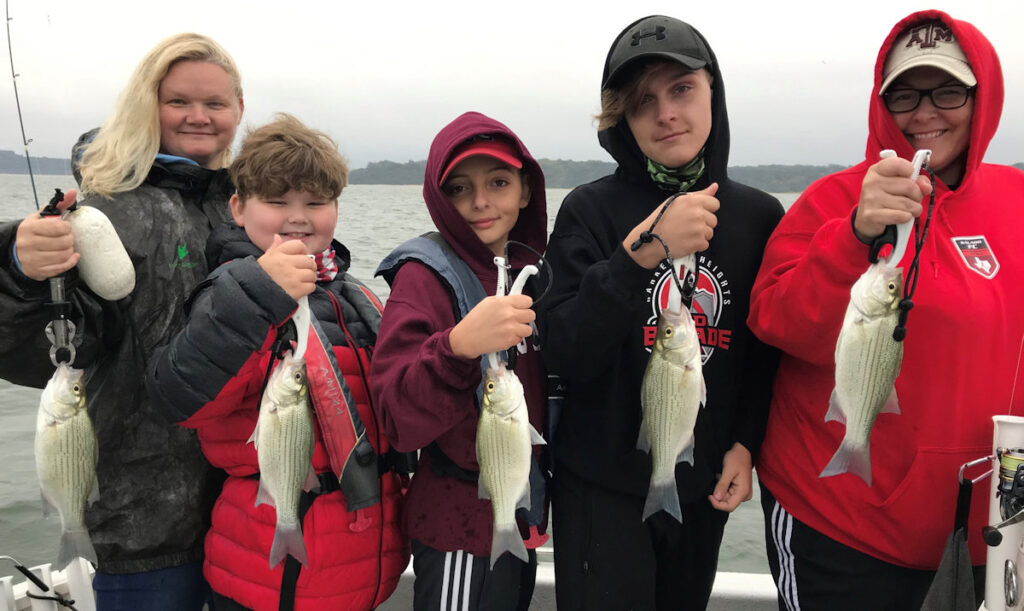 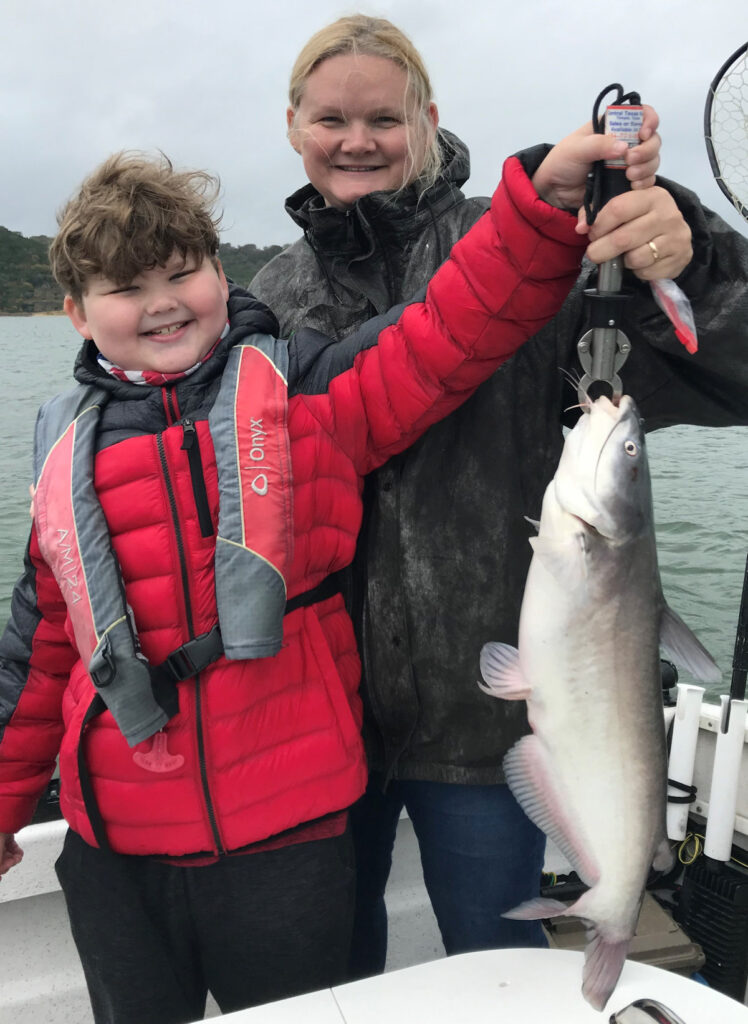 PHOTO CAPTION #2:  Kim gives Gregory a hand hoisting this 8-pound blue catfish which consumed Gregory’s MAL Lure near bottom in about 46 feet of water, no doubt attracted by the falling bits of shad regurgitated by the white bass we were catching. 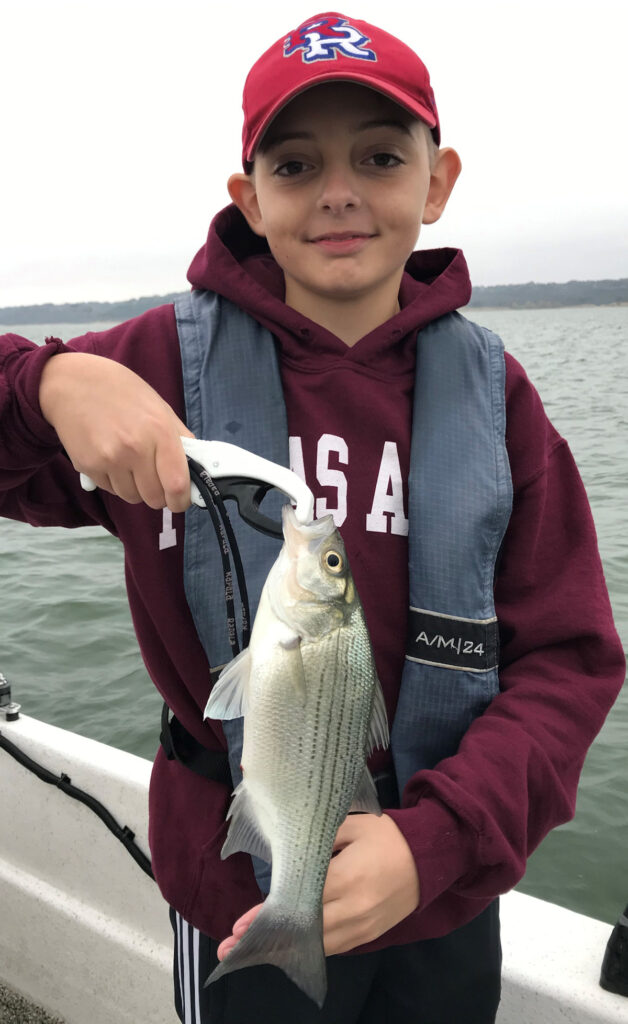 PHOTO CAPTION #3:  This young man, Kaden Howley, is a fishing machine.  He did not snack, he did not banter, he did not take a leak … he just stood in one spot in the middle of the starboard gunwale all morning and flat caught fish after fish after fish.  He was as excited about his last fish as he was about his first fish (after 4 hours of catching!!) This is our 100th fish of the morning, caught by Kaden, at exactly 9:28AM. 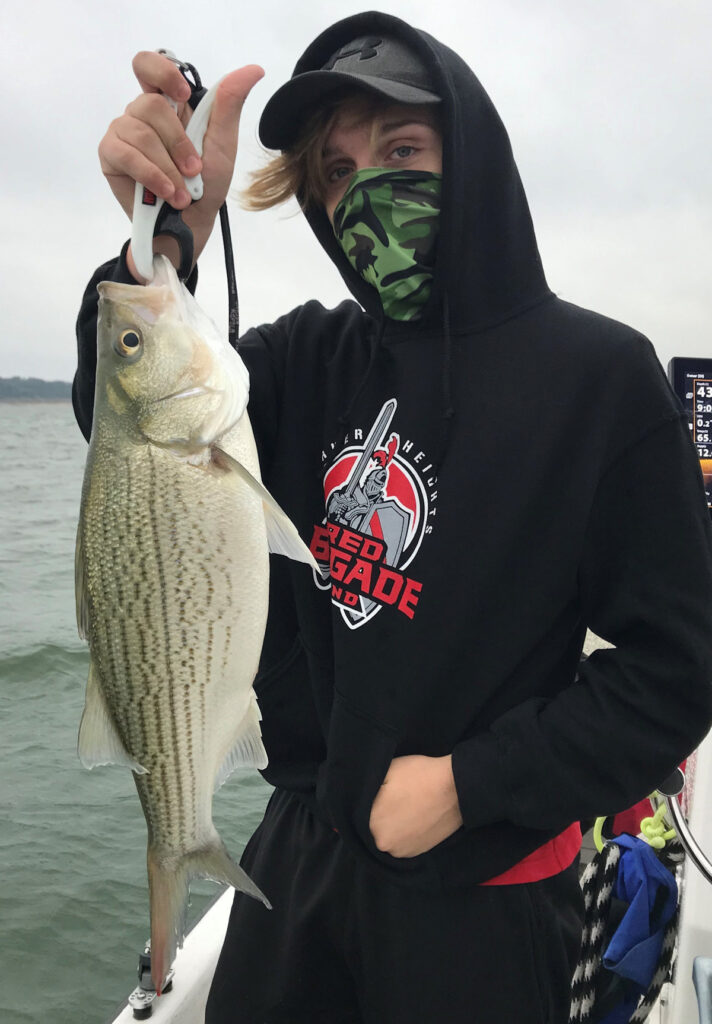 PHOTO CAPTION #4: Jacob Howley with our one and only hybrid striped bass of the morning.  This 3.75-pounder came out of 43 feet of water and was among the first fish to strike as we arrived at a new location.

For the second day in a row, we were blessed with grey skies and wind — and, unlike yesterday’s NE breeze, this morning’s wind blew from the SSE.  Overnight we experienced warming and increased humidity in the atmosphere as the overnight temperature rose from 59 at sunset to 61 at sunrise.

Anytime we have wind and cloud cover, I get pretty giddy about having folks – especially kids – on the boat.

Before we left the dock I gave my MAL Lure demo, then had each person demo it right back to me to be very sure everyone knew what to do when we found fish.  This pays off when, instead of having to coach out bad technique as we are fishing, that coaching can be done before risking the loss of fish.

With everyone “MAL-qualified”, we set out to find fish.  It did not take long, in fact, I was surprised at how quickly I found fish given that the skies were pretty “murky” with dark cloud cover and a light drizzle falling at the time.

We fished 3 general areas this morning with the first and last stops seeing moderate action, and our middle stops (accounting for the middle two hours of the trip) producing the lion’s share of the fish.

At long last we were aided by gulls this morning.  A small flock of ring-billed gulls began to circle and pluck shad from the surface over top of actively feeding white bass in over 40 feet of water.

We “short-hopped” in an area perhaps 2-3 acres in size to stay on these fish, all the time working 5 MAL Lures with a smoking retrieve to keep fish coming over the side and keep the commotion generated near bottom going so as to feed the “chain reaction”.

Between 11AM and 11:15AM, the action died hard, the winds picked up to over 14mph, and it looked like a good dose of rain was going to fall once again.  At this point only the moms and Kaden were fishing, when Kim gave me the “let’s call it a good morning” sign and we headed in with exactly 175 fish landed.

OBSERVATIONS:   During the mid-morning period a small flock of ~8 gulls helped us find very active white bass feeding on bottom as they picked off dead and crippled shad driven to the surface by the most active feeders in these white bass schools. 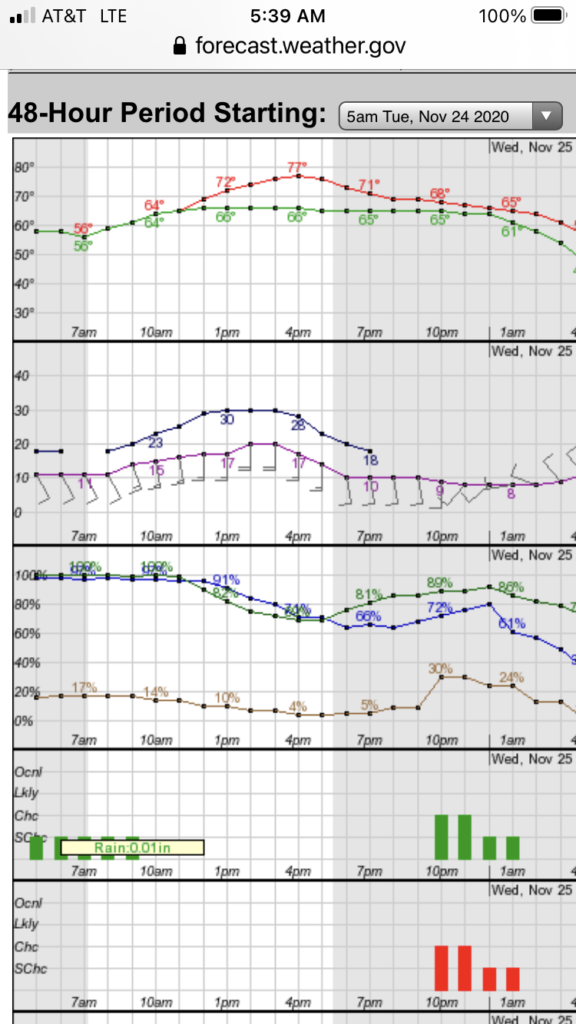 As I watched my crew make their way from the parking lot to the courtesy dock, my first comment was (only half-jokingly), “It looks like someone didn’t get the email.”

It was 50F and cloudy with a northeasterly breeze blowing, and Tim was wearing shorts and a hoodie.  I had on 5 layers on my torso.  I expressed my concerns but, Tim insisted he’d be okay, sharing that he occasionally golfs with snow falling up in Colorado.

With that, we headed out to hunt for fish. 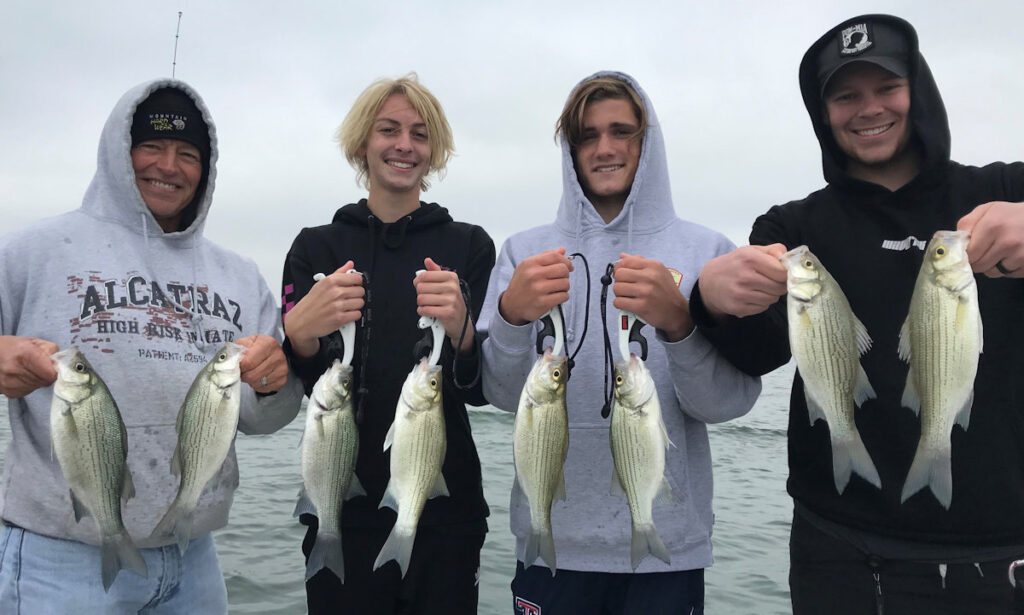 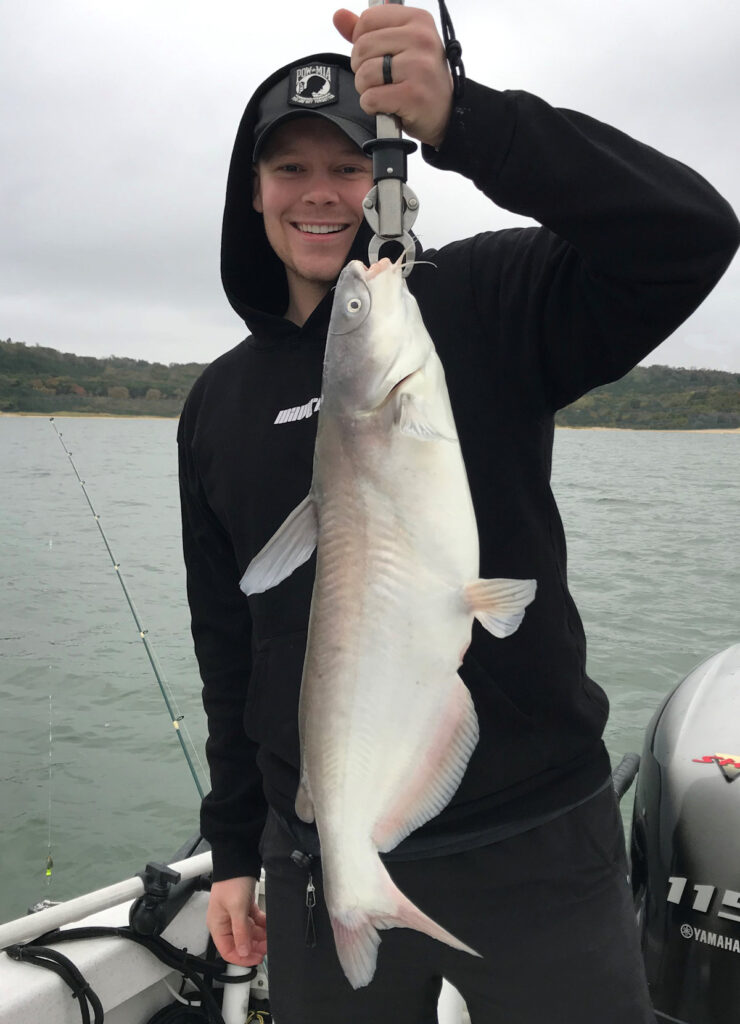 PHOTO CAPTION #2: Tim took this nice 8-pound bluecat in ~47 feet of water.  Most of Tim’s prior experience has been fishing in saltwater on the Texas coast, or pursuing trout in Colorado and Wyoming streams.  He was a quick-study and picked up on the MAL Lure tactics easily. 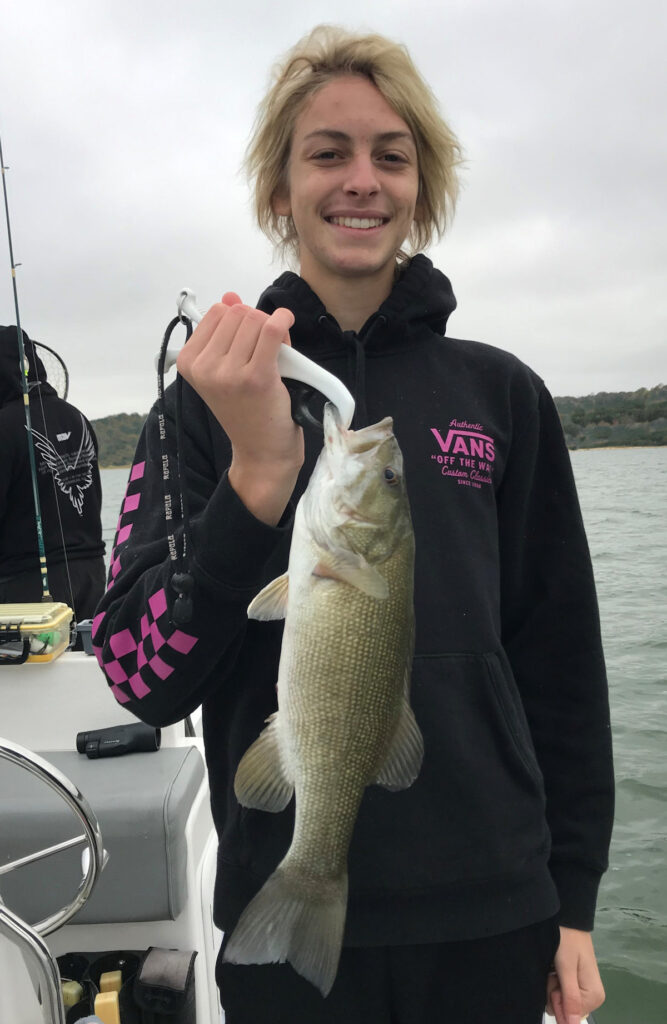 PHOTO CAPTION #3: Sean came up with a deep-water smallmouth from the same area where we picked up the bluecat.  An abundance of shad had all sorts of fish pulled into this area.

Despite having fished my entire life, I still get excited when we get a combination of grey cloud cover and wind, just knowing that feeding fish are out there to be found.  This morning, although the winds had an easterly component, it was still moving the water, and the grey cloud cover stuck around all morning.

Since I’ve fished nearly every day but Sundays and Thursdays since returning from Alaska in mid-September, I was able to compare/contrast today’s fishing which was influenced by an easterly wind, with the fishing on days with wind from other directions.  I found that although the fish were willing to bite, they would “flare up” soon after we got our presentations down to them, go strong for a short while, then cool off more quickly than with a southerly or westerly wind.  Thus, in today’s 4-hour trip, we moved a bit more (6 stops in all), whereas I’ve been able to put together a solid 4-hour trip with just 3-5 stops under more favorable wind conditions.

I also noted that we had more fish “pass” on our lures as they cruised by, thus having to “work” harder to catch a given number of fish.

Once again, 100% of our catch was taken on the MAL Lure this morning, in fact, I didn’t even bring any other rods as I was very certain that without a major change in weather and with the water temperature remaining stable, the fishes’ interest in the MAL Lure would continue.

In all, we landed 155 fish by using a smoking tactic in conjunction with Garmin LiveScope.  Once everyone got the fundamentals of the MAL Lure retrieve down, I then introduced LiveScope to make them more efficient by seeing/knowing when to retrieve short and when to retrieve long, based on fish reactions to their presentations.

It was a good day and, to my surprise, Tim’s lips did not have a notably blue tint to them by the time he was ready to wrap them around some Miller’s Smokehouse fare following the trip. 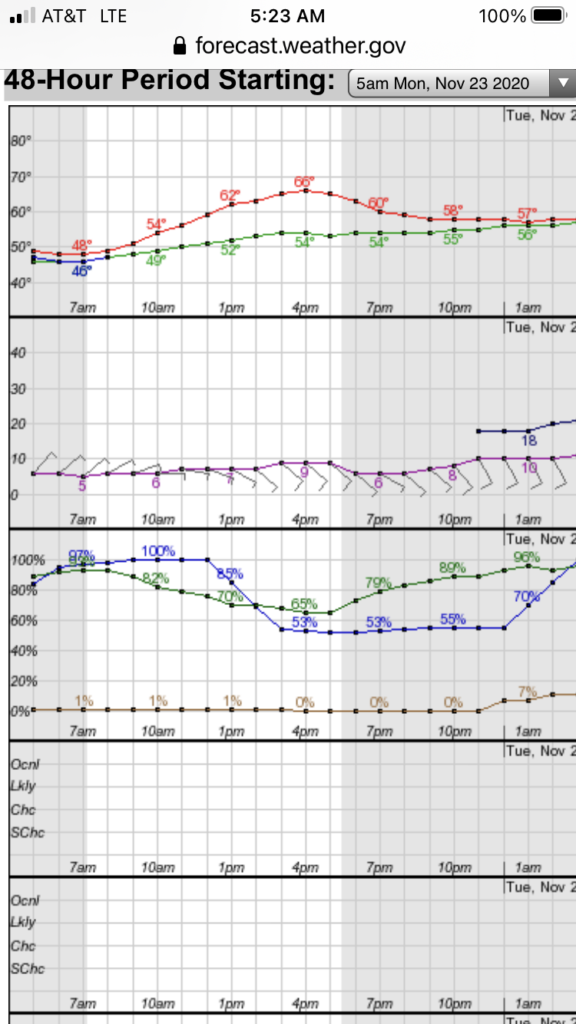