The two fish and hunt together in and around Choke Canyon Reservoir, near San Antonio.

Steve also heads up to Alaska and works operations for Adventure Alaska, a hunting and fishing operation on Prince of Wales Island, about 3-4 months out of the year most years (www.FishOrHunt.com).

The fellows shared that they both do well on white bass in the spring and on into the summer, but the deep water, cool season fishery is something they’d hoped to improve on.

Steve has a new Ranger boat on the way and also wanted to check out the array of sonar on my own boat in order to narrow down makes and models which would suit his own multi-species pursuits, so, in addition to catching fish, I also intentionally pointed out what I was (and wasn’t) seeing on sonar which led us to fish on certain areas and pass on others. 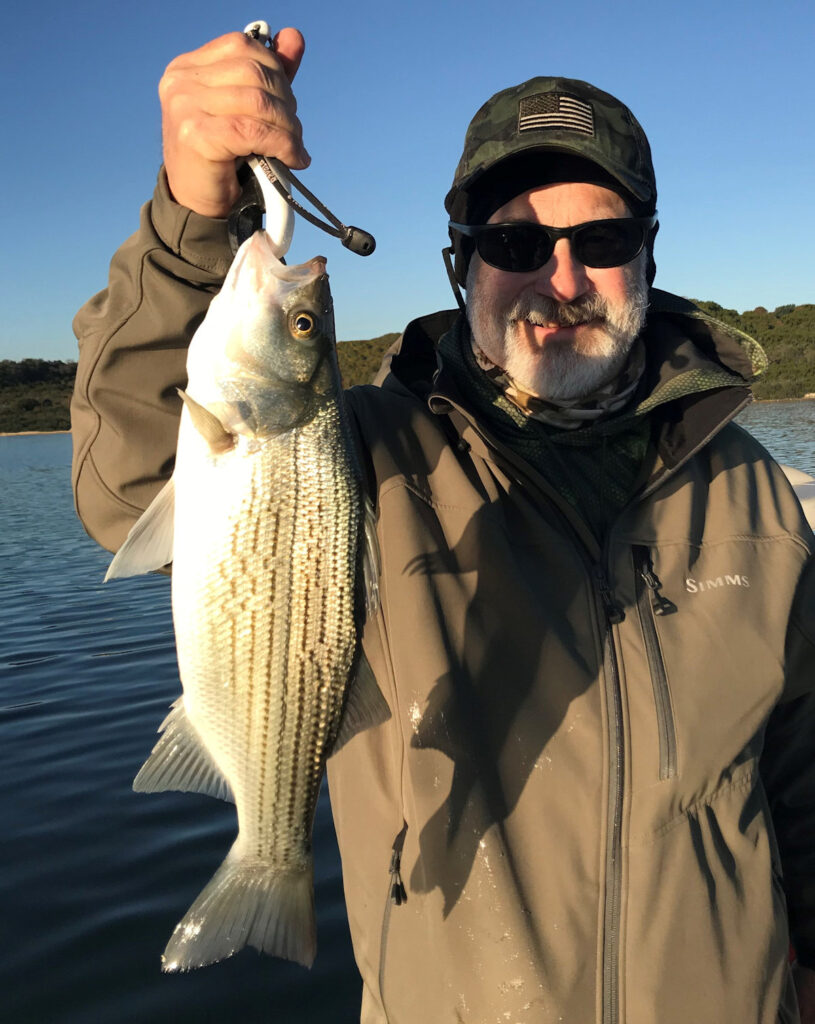 PHOTO CAPTION #1:   Steve Gates with an early morning hybrid striped bass taken from 43′ on a MAL Lure in chartreuse. 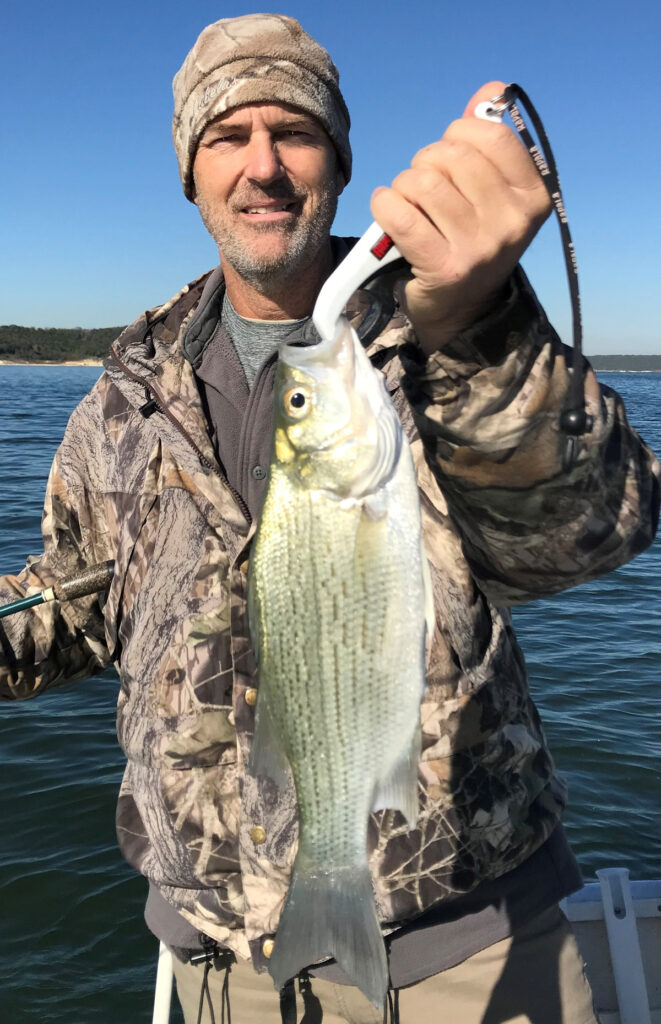 PHOTO CAPTION #2:   Brian Pedersen with out single largest white bass out of 237 landed; this baby went just over 14″ and also came on a chartreuse MAL Lure. 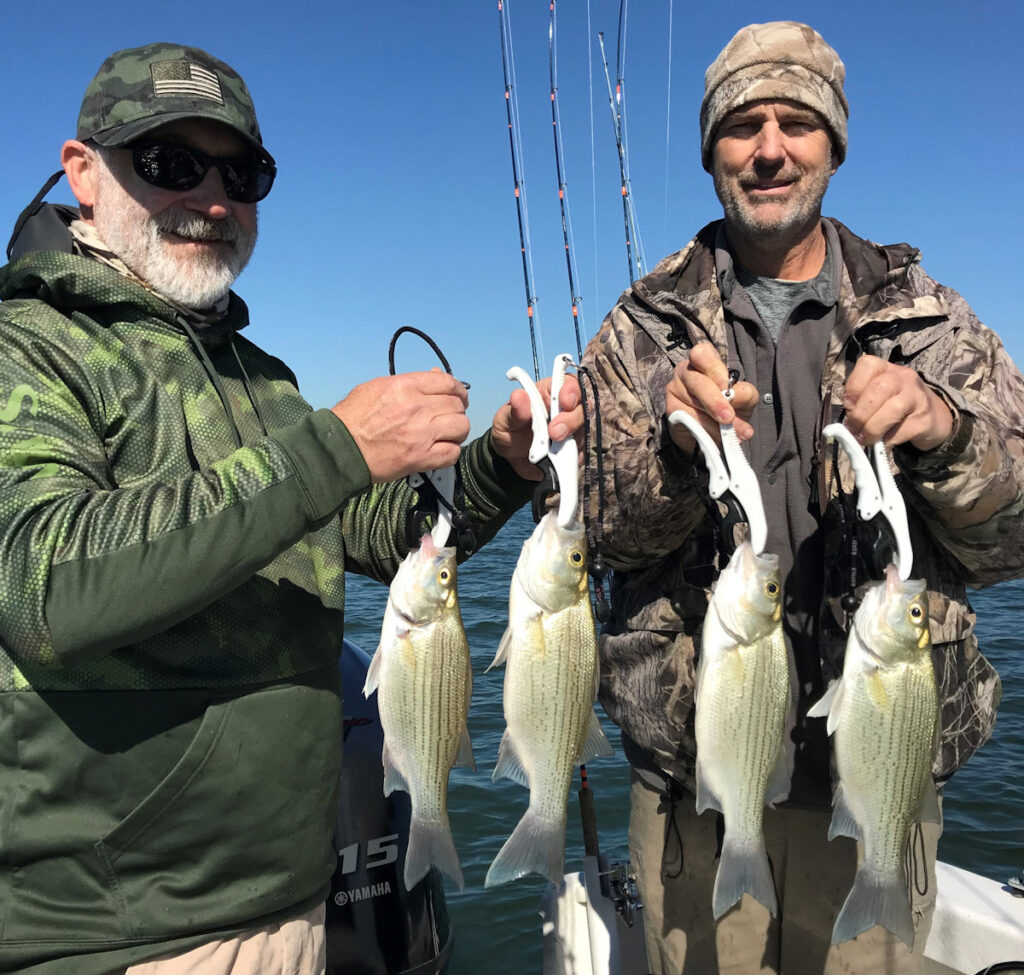 PHOTO CAPTION #3:   White bass were plentiful this morning; whenever we found them, there were plenty to go around.  Four separate stops made the entire 4-hour trip.

Fishing was nearly “cookie cutter” as compared to the day before, only better, as we had winds from a definite direction (SSE) which constantly strengthened (from 2 – 12 mph) over the course of the trip.

With two experienced anglers on board, I essentially provided a quick tutorial and then let them get right down to catching without having to do much coaching or polishing of their techniques whatsoever.

Like most folks new to working the MAL Lure, the tendency to try to set the hook upon feeling a strike would be a bit difficult for these fellows to overcome (the longer you’ve fished, the harder this is), but, the main thing of getting the spinner blade spinning in a short vertical span was mastered by both fellows right off the bat.

We fished only four distinct locations this morning, and the fish activity followed a normal, bell-shaped curve, getting started in the first hour, building to a peak in the middle two hours, and then falling off to nothing by the end of the fourth hour.

We worked the MAL Lures in a “plain Jane” vertical retrieve the entire time on the water, save for about 10 minutes of experimentation with slabs at the very end of the trip so the fellows had a glimpse of what will be required to continue to catch fish when (or if) the water temperatures fall into the 50’s.

For their efforts, Steve and Brian landed 244 fish, including 2 hybrid striped bass, 2 largemouth bass, 3 freshwater drum, and 237 white bass, of which only a handful were sub-legal (under 10″).

OBSERVATIONS: Still no helpful bird activity in any amount after just 2 days of minimal assistance 2 weeks ago.  I think it just hasn’t been cold enough long enough to get the birds pushed down here and get the fish oriented on suspended bait quite yet. What gulls are present are preoccupied chasing loons.

Wind Speed & Direction:  Winds were SSE2 at sunrise, slowly tapering up to SSE12 by trip’s end. 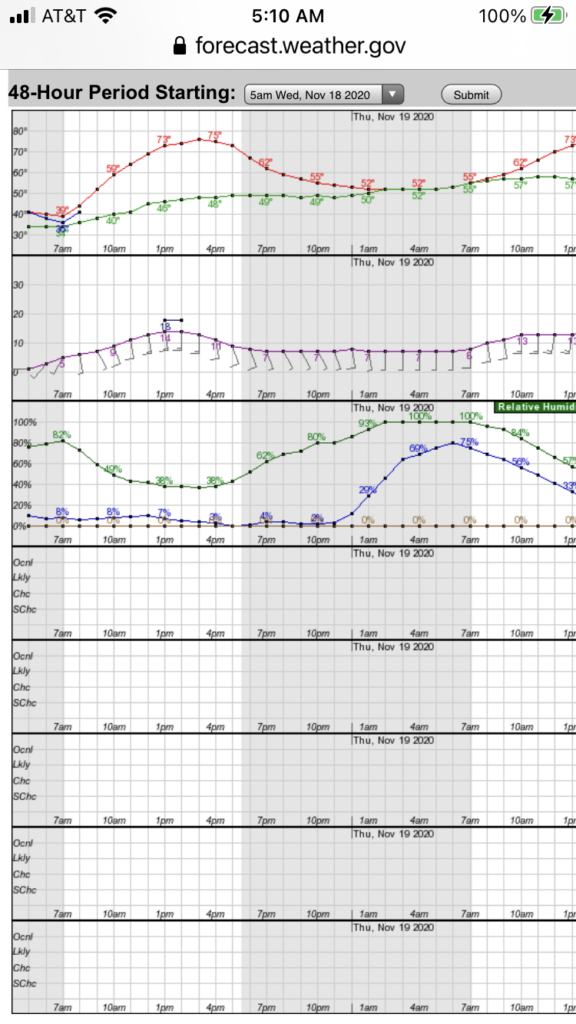