WHO I FISHED WITH: This past Wednesday morning I fished with Anthony and Sheila Johnson of Killeen.

I first got to know the Johnsons when I went out on their boat to provide them with on-the-water sonar training on the Lowrance equipment they owned at that time.  As we wrapped that effort up, they asked about peak times of year for the fisheries on Lake Belton and Stillhouse Hollow. I told them about the underappreciated autumn fishery for high numbers of white bass we see each fall.

They put a date with me on the calendar on the spot, and today was the day.

Like many Texas anglers, the Johnsons normally hang up their fishing gear one the warm weather passes, not picking it back up again until the spring warmup.  They walked away today with their eyes opened to a winter-long fishery right in their own backyard. 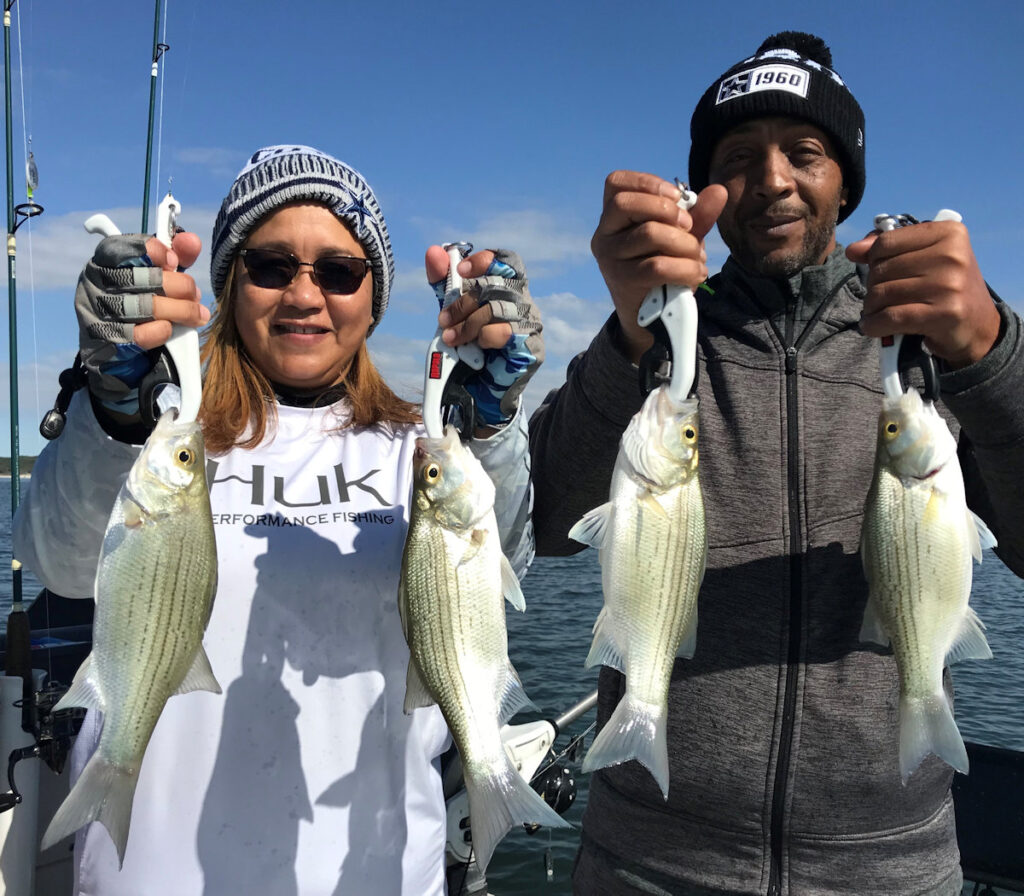 PHOTO CAPTION #1:  Sheila and Anthony enjoyed the learning as much as they did the catching this morning as they put together a 171 fish trip under tough conditions. 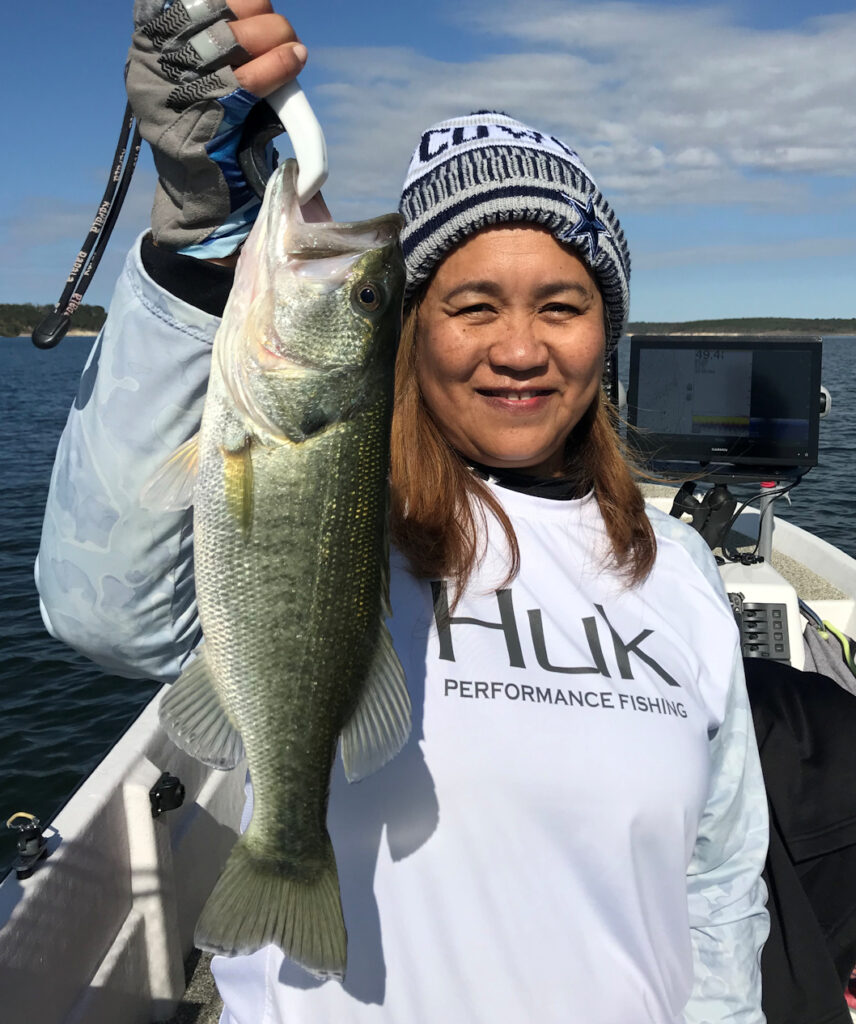 PHOTO CAPTION #2:  Sheila landed our largest fish of the trip.   This recent arrival to deep water was taken over a 51′ bottom.  It was one of four largemouth taken from that same depth as a bycatch as we focused on white bass.

Today was going to be difficult according to the forecast as post-frontal high pressure built in, skies cleared, temperatures dropped, and winds went nearly slack.

Unfortunately, the weatherman got it just about right this go-round.  Our saving grace was that the north wind blew just enough to ripple the water all morning — we never went flat calm (until the afternoon, but, that’s the topic of my next report).

We started right at 7AM with  the sun cracking over the eastern horizon right at 6:56AM.  The fish were very sluggish for the first hour or so during which time I found fish, but after initially dropping into them and creating some commotion, the fish became disinterested, only half-heartedly chasing our MAL Lures.  We landed only 3 fish, with more than that missed thanks to “rookie” mistakes which everyone makes the first time they have my MAL Lure on the end of their line, despite doing a practice session before leaving the launch site.

After a lot of searching and hardly any finding, I saw a small pack of fish holding off a slope in 52 feet of water.  It didn’t look like much, but, when conditions are tough, I will go ahead and try to fish for “marginal” action knowing that as a bite builds, such a thing can turn into more.

This is exactly what happened to us.  Once we got those deep water fish going, they never slowed down until about 10:35, and then didn’t quit until around 11:05.

We put together this morning’s trip on just one stop, and landed 168 of our 171 fish on the on stop.  This catch included 1 hybrid striped bass, 4 largemouth bass, and 166 white bass.

Every fish we caught today was taken on a white or chartreuse MAL Lure worked vertically.

The Johnsons very much wanted to see the approach I took to finding and catching fish this morning.  Learning was to them even more important than catching, and they both asked smart questions all through the morning as they thought about how to take what they were learning and apply it to their own approach, given the equipment they now have.

Whenever Anthony hinted that an equipment upgrade to sonar or trolling motor, etc. might need to be considered, Sheila would bring him back to reality and remind him that Ramen noodles would be on the menu frequently if his spending plan went through.

As Anthony kept on dreaming, Sheila doubled-down and told him Ramen may become a delicacy if he kept on with the big ideas, and that catsup soup might just become the standard fare, instead.

One thing the two did agree upon  —  that was to book a spring-time hybrid striper trip with me so as to see live shad fishing first hand.

OBSERVATIONS:   Deep water was insurance against the impacts of post-frontal weather. 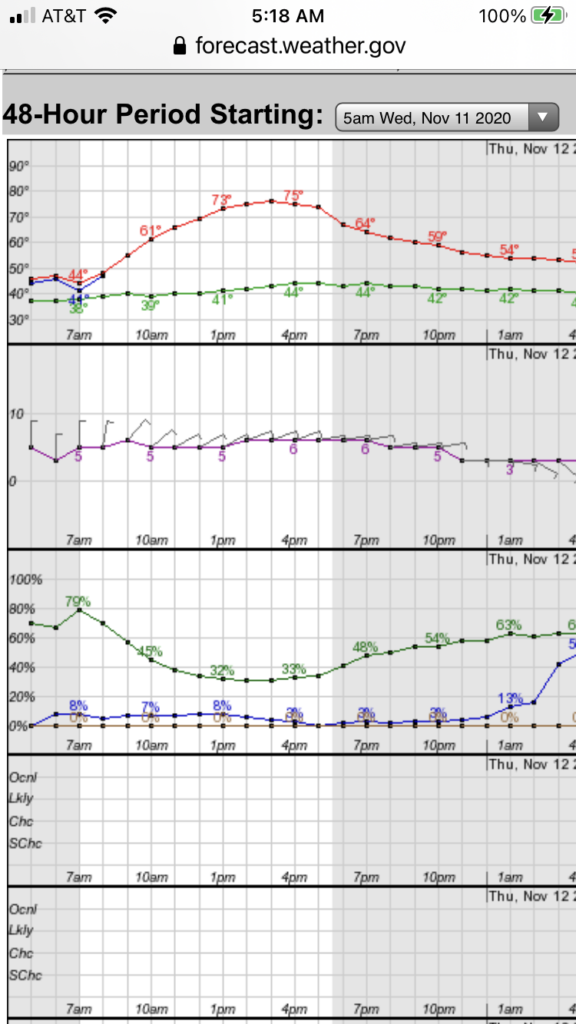