WHO I FISHED WITH: This morning, Wednesday, November 25th, I fished with returning guests Jerry Saikley, Mike Giganti, and Jeff Burns.  Joining me for the first time was a co-worker of Jeff and Jerry’s, Justin Brown.

These fellows all know one another through the work Jeff, Jerry, and Justin do on West Fort Hood.

As I introduced everyone to Garmin LiveScope, Mike observed that, “This is just like Blue Force Tracker for fish!”.

He was referring to a GPS-based military system called “Blue Force Tracker” which allows commanders to track the location of friendly (and enemy) forces on a monitor, the appearance of which looks much like the Garmin monitors strapped to the starboard gunwale of my boat. 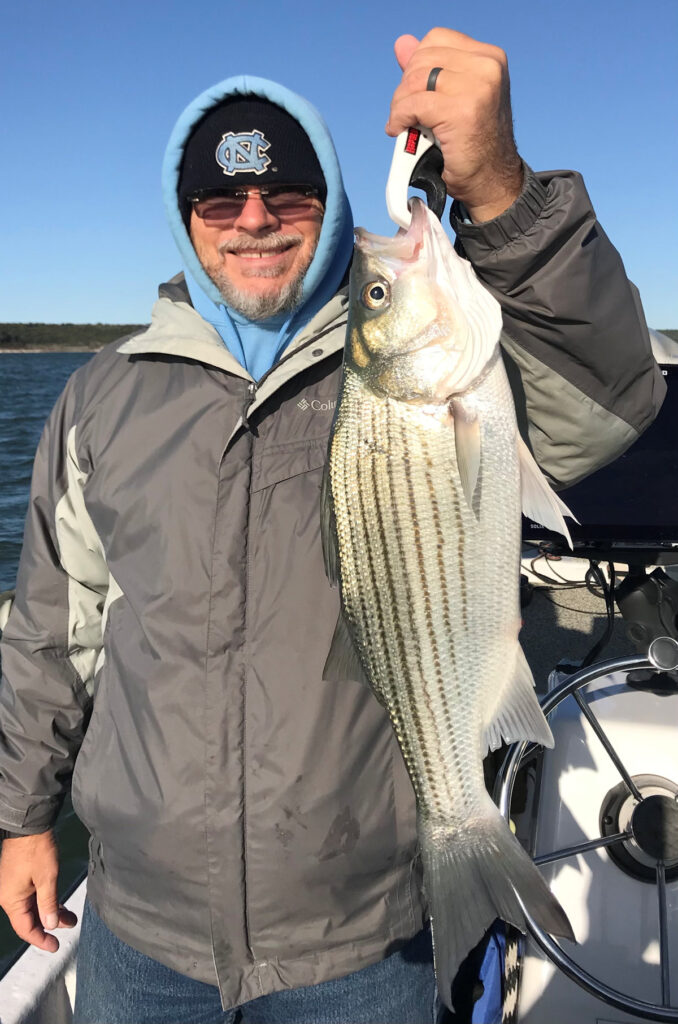 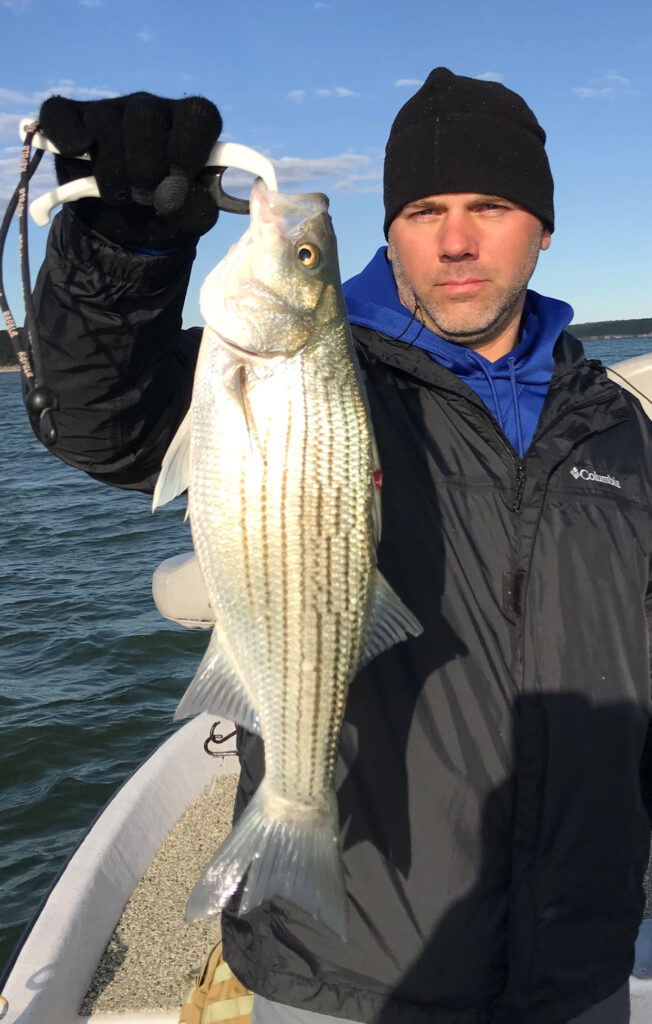 PHOTO CAPTION #2: Mike Giganti took this nice hybrid which rocketed off bottom to overtake his MAL Lure as it rose through the water column toward the surface. 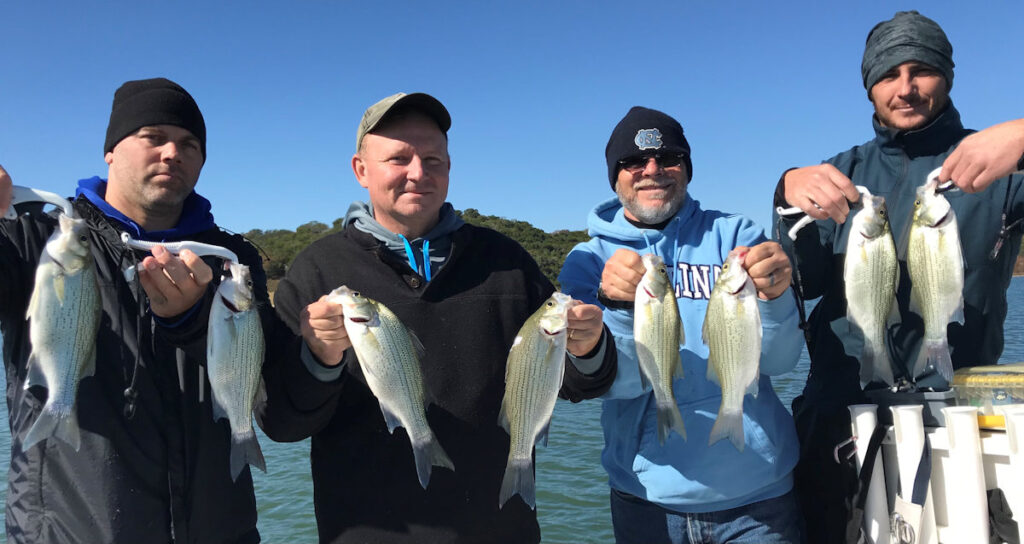 PHOTO CAPTION #3: Mike Giganti, Jeff Burns, Jerry Saikley, and Justin Brown each with a pair of some of the larger white bass we landed this morning.

Fishing was pretty cut-and-dried this morning.  The fish were very active through 9:35AM, then geared down a notch, then knocked off at 11:10AM.

Thanks to the passage of a cold front overnight, the fish were very aggressive and were willing to rise into the water column up off the bottom a greater distance that they have been under non-frontal weather conditions.

We fished two areas before some light bird action got going, then spot-hopped as indicated by gulls for a full 90 minutes thereafter.  In both areas we fished before getting up under the birds, we encountered an unusually high number of small fish (this year’s crop).

The fish we caught under the birds and at two locations without birds after the birds stopped working at 9:17AM, were of a better size mix.

The MAL Lure really shone today — it was super effective on both bottom-hugging and suspended fish, minimal tangling, high hook to land ratio, and easy to work.  We caught 100% of our fish on MAL Lures this morning,.  The fellows were so impressed with the lures (after experiencing average fishing on slabs they’ve been using in their own fishing efforts), that they purchased lures from me “off the tailgate” from a ziplock bag I keep just for such occasions.

OBSERVATIONS:   For the second day in a row, and during the mid-morning period, a flock of gulls, numbering ~2 dozen, pointed the way to active white bass over open water.

Wind Speed & Direction:  Winds were NW13 at trip’s start, tapering down to NW8-9 by trip’s end 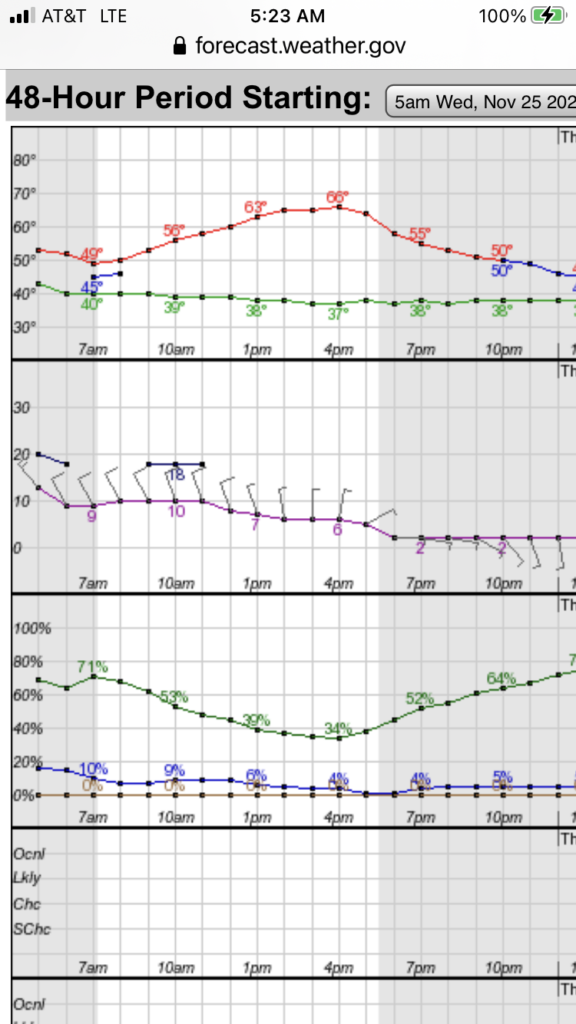